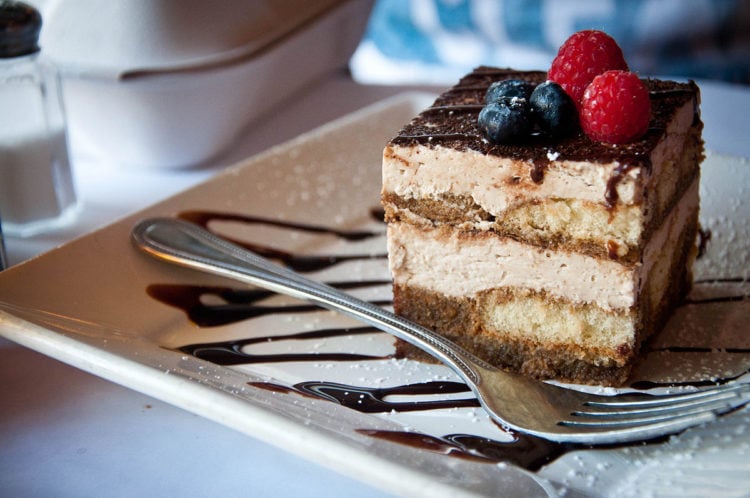 Tiramisu is an Italian dessert that is decadent and beautiful to the eye. Once you sit at the table with a fork in your hand and try the first bite, you’re likely to be overcome with its creamy and delicious richness. It’s one of the most amazing desserts to ever come out of the country of Italy, the home of its creator. Although it’s a delightful treat, there are some reasons why you should use caution when indulging in this tasty food. Here are 10 reasons you should be avoiding tiramisu.

1. It has a high-calorie count

If you’re trying to watch your fat and calorie intake then this alone is one very good reason for avoiding Tiramisu. It’s loaded with unhealthy calories. Having this tempting dessert within reach is likely to present too much temptation to avoid. We’re only human and tiramisu is a taste sensation that is nothing short of delightful, but it will pack on the pounds. Just 3 ounces of tiramisu contains 240 calories.

If you were to eat a steady diet of Tiramisu your cholesterol count would rise. This isn’t a good thing for anyone of any age. Eating too much of this dessert increases the level of the bad cholesterol in your bloodstream and this could, under severe bouts of overindulgence contribute to the development of high cholesterol and potentially cardiovascular issues. If you’re on a heart-healthy diet or prone to high-cholesterol, this is a food that you should probably avoid.

Tiramisu was at the center of debate when diners who ate tiramisu at a Holborn restaurant would up n the hospital with salmonella poisoning. The cause was ingesting tiramisu made with raw eggs. The eggs were contaminated and the dessert was tainted, causing the victims to become so ill that they were required to seek emergency medical assistance.

4. You can’t tell by looking

A tiramisu dessert that is tainted with salmonella poisoning will not look any different than one that is not. You won’t be able to tell by looking if its okay to eat. You will be taking your chances that you won’t meet with the same results as many others who have been sickened by the dessert.

5. You can’t tell by smelling

Salmonella is one of those things that you can’t see with the naked eye, nor can you smell it in a cake that has been contaminated. It’s completely odorless, but this doesn’t mean that it isn’t potent enough to make you violently ill or even kill you. Health experts have been warning the public for decades about the dangers of eating raw or undercooked eggs. It’s just not worth taking the risk.

6. You can’t even taste a difference

Tiramisu has a very strong, complicated and delicious array of flavors. In most cases, even if salmonella is present thanks to the raw eggs used in the product, you won’t be able to taste a difference between a good tiramisu and a very bad one.

7. You can’t store it for long

If you try to store a tiramisu in your refrigerator for two days or more, the ladyfingers which are a principal part of the dessert will begin to break down and they will become mushy. The only solution to this problem is to eat it within a day or two or discard it and what a waste of an expensive dessert. I don’t know how you feel about it, but I wouldn’t like to eat mushy ladyfingers.

8. You shouldn’t serve it to the elderly

There have been a few health notes on Tiramisu that suggest it should not be eaten by the very elderly who have health concerns. A hospitalization with salmonella poisoning could trigger a worsening of other health conditions and the results could be fatal.

9. Babies and toddlers should avoid tiramisu as well

Another group of people who are at risk for tragic results from eating raw eggs is children and babies. We remember the good old days when it was considered okay to lick the beaters, spoons, and bowls when making a cake with raw eggs. In recent decades the numbers of salmonella poisoning from this practice have prompted health officials to strongly urge avoidance of eating any batters or foods with raw eggs in them.

10. If it presents a risk to others why would you want to partake?

Since the risks are present for becoming ill from eating authentic tiramisu, it’s really not worth taking the chance. If you can’t resist eating tiramisu consider making it yourself. There are some amazing versions of the recipe that don’t require the use of raw eggs.