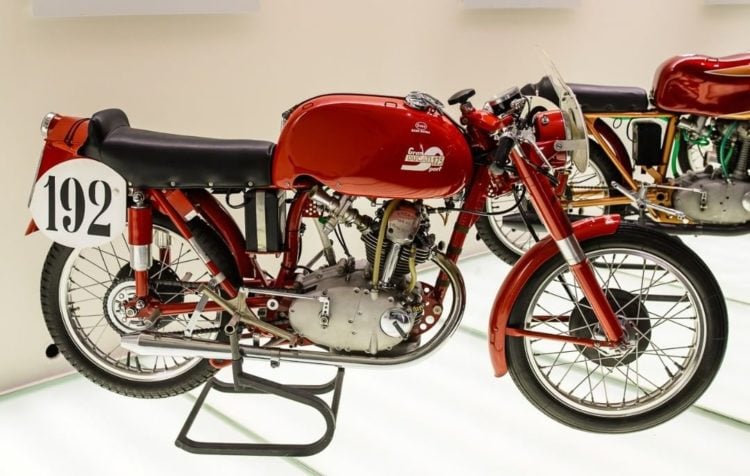 From 1946  through 1958, Ducati was experiencing outstanding success with their Cucciolo model. In those days, Ducati had not yet fallen on their hardest of times, and they were moving forward without reservation. So, they turned their full attention to the Gran Sport line of motorcycles. These bikes were called ‘Marianna’ with great affection, it was this particular line that would begin to take Ducati into its successful run into racing…and winning. The Marianna line would start winning races right away, and it would be with ‘her’ that the Ducati name would be used whenever racing was discussed in certain circles.

They weren’t only known for racing; the bikes had also gained a reputation as being strong and highly dependable. The Milan-Taranto and Tour of Italy were races that were both renowned for being long-distance, covering miles that went into the thousands. The bikes were not permitted to stop if they had mechanical failures of any kind, but the Marianna could pull of the longest of them, on pretty much any racetrack with only a few small adjustments. Riders loved their competitive abilities so much that the Marianna was soon the supporting factor when it came to the 125 Class, both in the World Championships and Italy.

But the best thing about the Gran Sport Marianna was its design. Created by Fabio Taglioni, this motorcycle was the beginning of the Ducati Grand Prix versions due to the exclusiveness of design that it featured mechanically. It is this very exclusiveness that makes Ducati stand out from the rest to this very day. With that in mind, let’s take a look at the Marianna’s story, specs, and other details that will show you why she was so loved and trusted.

There were many things about the Gran Sport Marianna that set it apart from other motorcycles of its day. First, it was the only bike at the time to have an overhead camshaft engine that was bevel driven. This opened the door to the future for all other Ducati motorcycle engines to be developed into single cylinder types up to the 1974 season, as well as the twin engines that were bevel driven up to 1986. The truth is, Taglioni broke ground here in more ways than can possibly be understood by the motorcycle world, but the man was good for that.

The Marianna would eventually evolve into the Bialbero a limited edition bike with that featured a double overhead camshaft, and had engine varying displacements of 100, 125, and 175cc. When bikes that we refer to as ‘wide case’ models came out, the term ‘narrow case’ was coined simply as a way to tell the two apart. Wide case models had frame mountings that were wider, which would be suited to the wider design of the frame. That was really the only difference between the two.

For Ducati, the Gran Sport line was so successful that Ducati decided to alter it enough to make it a sport bike for road use. The result was the 175 Sport, which was released in 1956. With enclosed valve springs and a single-piece head on the cylinder, the engine on the 175 Sport had a much more simple engine than its predecessor, which made it much more suited for on-road use. This particular model brought Ducati huge success, but aside from the minor engine alteration, the credit really had to be given to the Marianna, the bike that had truly set the standard and paved the way for it. Following the 175 Sport were other bikes that essentially evolved from the Marianna, their genus bike. Models that were birthed from the Marianna included the 175 Turismo Speciale, the 175 T, the 125 Turismo Speciale, the 100 Sport, and the 125 Sport. All of these motorcycles used the same type frame and engine.

This was considered a motorcycle of the highest improbability. In only 1956, a mere eight years before the Marianna’s unveiling, the Cucciolo, (or ‘puppy) had been put out by Ducati, and it was a very mild bike compared to what we are discussing here. In a short time, the company came a very long way indeed. Thanks to the work of Fabio Taglioni, the Marianna, along with many other models, changed the face of the motorcycle world as we know it, and Ducati became synonymous with racing bikes for almost everyone. This is no small feat, and should be recognized for what it was, and is.

In a nutshell, 1954 saw the creation and release of the Ducati Gran Sport Marianna, which managed to changed the way racing was done, and the bikes that raced, for the better. Never again would a motorcycle built for the race track be the same, and Fabio Taglioni was to thank for that. Many models evolved from the Marianna, and each one was a better version from the last, though they all stayed true to form when it came to their purpose…and that says a lot about Ducati and Taglioni himself.

You can find Mariannas on line, if it is a bike you would like to check out, just for the purpose of appreciation, if you are a collector, or if you would just like the pleasure of owning this iconic motorcycle. As with all Ducatis, treat her with the respect and love she deserves, because after all, she is more than just another motorcycle.

She has earned a legitimate place in the annals of racing history.