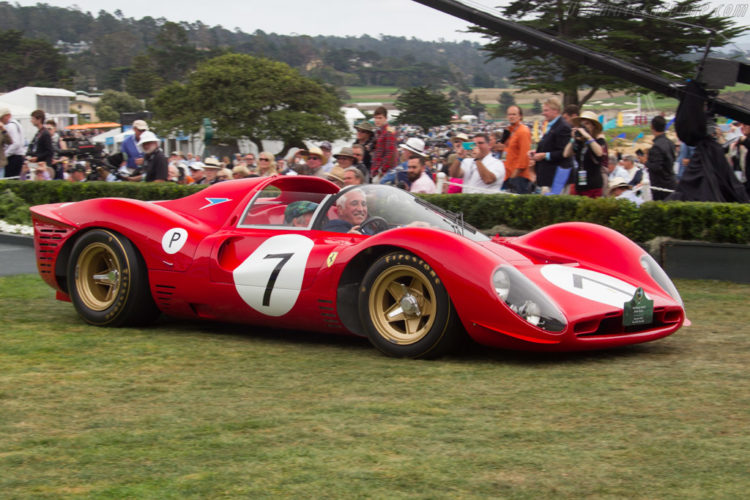 According to Askmen , the 1967 Ferrari 330 P4 Berlinetta is probably the most outstanding Ferrari of the 20th century. The Berlinetta is easy to spot in a million cars thanks to its outstanding curvaceous body. The 330 P4 was a revolutionary car that brought glory to Ferrari and remained among the top cars in the 330 P series. The car has been defined by Super cars as being revered due to its looks and success on the road. Its curvaceous low lines give it a totally different look from all other proceeding Ferrari’s in the 330 series. Interestingly, only one Ferrari 330 P4 is left for car lovers to behold. The P4 is also the only remaining Ferrari prototype that still resembles a racing car to this date.

The conception and birth of the Ferrari 330 P4 was as a result of tough competition. At the time that the car was built, Ford had pulled together the outstanding GT 40 program, winning the 1965 24 hours Le Mans— beating Ferrari by far for the first time. This was a time that Ferrari experienced a low owing to the fact that their 330 P3 was slowly losing ground. Although Ford had completely changed the game by introducing the GT 40 program, Ferrari stuck to their smaller 330 engines and hoped that their superior handling would help outclass Ford.

In 1967, Ferrari had to find a way of combining its efforts of rear-engine accumulations into one car. The 330 P engine had gotten bigger over the years leading to significant challenges in regard to trans axles and weight balance. The improved and advanced engine came to be known as the largest Ferrari engine ever, the long-block Lampredi V12. By the time the 33O P4 was launched in 1967, Ferrari included plenty of new features such as the Lucas Fuel injection among other novelties.

Given that the 330 P4 was mainly built to outclass the GT 40 technology, it had to be better in many ways than the preceding 330 P3. Ferrari had lost to Ford in the 1965 and 1966 Constructor’s International Sports Prototype. To add salt to the injury, Ford went ahead to sweep almost all the awards at the 24 hours Le Mans of 1966. Enzo Ferrari was furious at the defeat and instructed his chief engineer Mauro Forghieri to simply go and win the1967 Le Mans. The unveiling of the 330 P4 was a surprise shocker to most of the other competitors. Although it did not deviate from the 330 P3 by far, it went on to sweep the 1967 24 hours Daytona podium In the same year, the 330 P4 won the 24 hours Le Mans helping Ferrari claim its spot back as the best in sports car engineering.

The P4s raced in the same class as the 330 P3. The P3 was an earlier version of the Berlinetta and remained on the track for quite some time. The P4s were much more complicated thanks to the novelties such as fuel injection and the somewhat unique design. The P4s must have benefited from the fact that they were slightly smaller in body, hence easy to handle. They were also a lot quieter than most of the other cars at the time.

Generally, the P4 was mainly put in place to help Ferrari claim back its position at the top. It is believed that Ferrari was satisfied by the work done after the P4 claimed the 1-2-3 spots at the Daytona. Enzo loved this car and kept a picture of the trio victory even to his death. The car also won the 1000 km races at Monza but eventually lost to Ford at the Le Mans the following year.

Three cars that redeemed Ferrari’s pride include chassis numbers 0856, 0858 and 0860. They were originally made to race as close coupes but were eventually converted to the spiders for the Brands Hatch 500 race. By the end of the season, regulations changed forcing the untimely end to the achievements of the P4 in the US. Only two of the P4s were prepared for group 7. After the end of their racing days, the world was only left with one original P4; chassis 0856, which now remains as the most valuable Ferrari and one of the most valuable cars in the world.

Because these cars are rare yet so popular, there have been several companies trying to remodel them. Noble made over 100 units of similar cars with the same look but using different engines. The cars vary depending on the needs of the user. With that said, all the replicas are far from the real deal as originally made by Ferrari.

Chassis 0846 is not a P4 but rather a P3, which is the other remaining car that is close to the 1967 Ferrari 330 P4. Chassis 0846 was driven by Jim Glickenhaus’ and was made with parts from David Piper. The car was made with the assistance of Ferrari but eventually caused a rift in the community. Several critiques have refused to accept the car as a real Ferrari. Jim insists that accident matches from the Le Mans on chassis 0846 prove its originality. Some argue that the body used on the car was originally a P3 and not a P4 while others seem to think the original chassis was a coupe and not a P3.

The 1967 Ferrari 330 P4 Berlinetta is just but one among many Ferrari’s that have created a rich history for the brand. One of the factors that stand out about this car is that it served its purpose. In 1967, Ferrari was suffering under the hands of the Ford GT program. Ferrari had lost the Le Mans two years in a row and was losing its position as the top sports car manufacturer. The P3 cars were running out of power and Ferrari was on the verge of losing its identity. It is the Berlinetta that came up in 1967 sweeping the top 3 positions in the 24 hours of Daytona and reclaiming Ferrari’s position. Today, there is only one Ferrari 330 P4 left and is admired by all car lovers worldwide.