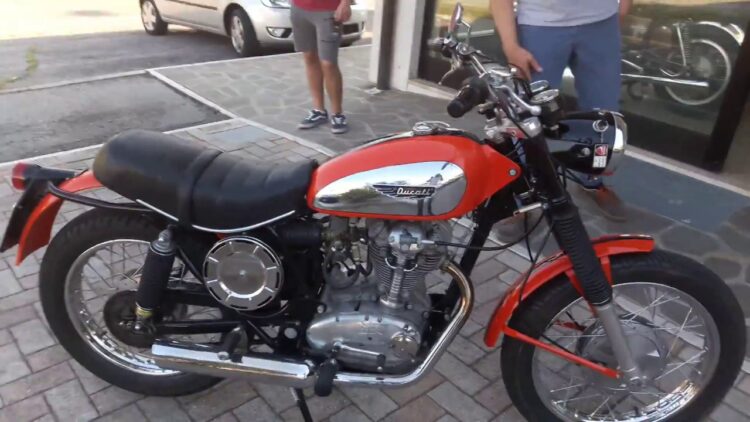 Initially entering the American market in 1962, the Original Ducati Scrambler quickly established itself as one of the most iconic bikes of the 1960s. First editions were available in 250cc and 350cc configurations, while the later Mark II models – complete with a new frame design and engine – were available as 125cc, 250cc, 350cc, and 450cc. The 1969 Ducati Scrambler was the largest original motorcycle from this line. It had a reinforced frame designed to handle its enhanced power and was available until 1976. Let’s look back at this magnificent bike that was affectionately dubbed the Jupiter in America.

Brief History of the Ducati Scrambler

Ducati produced a special series of single-cylinder scrambler bikes for the American market between 1962 and 1974. The line was branded ‘Ducati Scrambler’, and the American Berliner Motor Corporation is credited with its creation. From 1962 to 1967, Ducati produced the first Scramblers, which featured slightly altered frames and ‘narrow case’ engines. They were derived from street-legal models like the Ducati Diana road bike that Michael Berliner converted for dirt-track racing in the US. These models were generally called ‘narrow case Scramblers’ and had a 250cc maximum engine capacity. After 1967, Ducati began producing the second Scrambler series. These models used a wider engine case and a modified frame inspired by the factory racing bikes designed by Bruno Spaggiari. Ducati discontinued production of this line in 1974.

During the 1960s and 70s, Ducati was known for alternating between periods of commercial success and financial trouble. The automaker conceived and produced the Scrambler series during a particularly shaky time for the company, and it promoted Ducati’s next rosy period. By 1968, American riders could not get enough of the dirt bike craze, and any bike that remotely looked like it could fare well in the dirt was a top seller. Ducati had timed its Scrambler release perfectly. In 1969, Ducati introduced the 450cc Scrambler to the US market. It featured the largest chassis input in the program and was referred to as the Ducati Jupiter in America and the Ducati 450 SCR in Europe. In total, Ducati produced 11,000 of these on/off-road single cylinder bevel drive SOHC bikes. MotoTrans also made the 1969 Ducati Scrambler in Spain under license. Thanks to its impressive features, the 1969 Scrambler was successfully initiated into scrambles, enduro, and flat track races. When Ducati ceased producing this model, British importer Coburn & Hughes – as it was called then – bought the remaining stocks and continued to sell the Scramble until 1976. The 450 Scramblers in this batch were branded as Mark 4.

Ducati equipped the 1969 Ducati Scrambler with a 436cc four-stroke, air-cooled, single overhead cam motor that had an average wet weight of 300lbs. and produced 27 horsepower with a five-speed transmission. The impeccable suspension and frame, which blended in perfectly with the overall design, made this motorcycle irresistible to American riders. The bevel drive, single cylinder, OHC engine has alloy barrels and an alloy head with austenitic lines and was of a vertical split unit construction. Ducati used roller bearings for the large end and ball bearings in the main bearings. To close the valves, the automaker used hairspring valve springs. The bike’s compression ratio was 9.3:1, and it produced a maximum of 27 bhp power @ 7,000 rpm. The 85 mm × 75 mm (3.3 in × 3.0 in) bore and stroke made a 436 cc (26.6 cu in) displacement. Fuel to the 1969 Ducati Scrambler’s engine was supplied by a 29mm square-slide VHB carburetor from Dell’Orto. The ignition was done by coil and battery – changed to electronic in 1973 – and the lubrication system was wet sump. Compared to other models, this bike had a wider chain drive that supplied power to the rear wheel. The primary drive was provided by helical gears.

The 1969 Scrambler had a single cradle frame that featured strengthening gussets in its top tube and used the four-stroke engine as a stressed member. Its brakes were drums, with 160 mm (6.3 in) and 180 mm (7.1 in) diameter measurements in the rear and front, respectively. In terms of suspension, the rear included a swinging arm and twin 3-way adjustable shock absorbers from Marzocchi. The wheels were made of wire and alloy rims and then fitted with 400×18 and 350×19 rear and front tires.

Ducati only produced and sold a few hundred 1969 Ducati Scramblers, which explains why its market price today is over the roof. Depending on the condition of the bike, you can find one of these scramblers online for between $8,995 and $9,995. Car and Classic may have some listings for UK buyers, starting at £5000. Aside from the hefty initial price, finding parts for the 1969 Ducati Scrambler should be reasonably easy. You can buy a rundown piece, renovate it at your own pace, and then resell it. Alternatively, you can take it for a spin and feel the 1960s at their best.

The American market for dirt bikes in 1968 was positively booming. At the time, Ducati was already releasing 250cc and 350cc scramblers until Berliner Motor Corporation – the American importers – requested a model with a larger engine. Ducati produced a 450cc version of its Scrambler bike in 1969, the 1969 Ducati Scrambler. It was the first motorcycle in the series to use a 436cc engine, which was the largest possible displacement for the OHC unit. With inspiration from its racing department, Ducati fitted the Scrambler with a strengthened frame containing strengthening gussets along the top tube. The result was a remarkable piece of art that lives on today as a legendary bike.