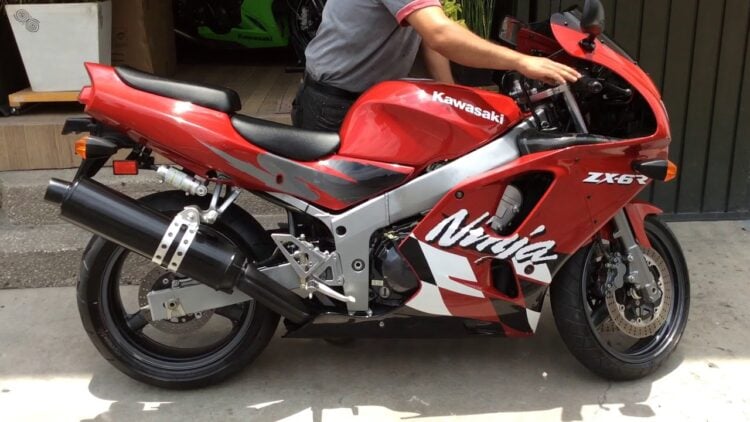 The 1997 Kawasaki ZX is a 600 cc class sports motorcycle from the Ninja sport bike series. Since it was launched in 1995, the motorcycle has been upgraded over the years. When it was introduced, the feature that stood out was its acceleration. For instance, it could accelerate from 0 to 60mph within 3.6 seconds due to its dry weight of 401.2 pounds and wet weight of 454 pounds. Another notable feature of this bike is its horsepower. Its horsepower was increased from 100 BHP to 108 BHP thanks to the introduction of a new airbox. For a 600 cc bike, it delivers quite a high horsepower. According to Cardo Systems, an average 600 cc motorbike delivers horsepower ranging between 55 to 80 BHP. Below are some features that make this bike worth riding.

ZX-6 Kawasaki relies on an electric start system to power it. Though electric start seems like a recent technology, the system has been around for some time. According to It Still Runs, the system became popular in the late 1960s. The system was introduced to replace the kick start system. In a kick start system, the motorcyclist powers the motorbike by repeatedly stepping on the ratcheting lever. This action is considered a time-wasting venture since you may be in danger and need to move out of a place quickly. Additionally, the system is not suitable for the weak since they can easily get fatigued before they manage to power the bike. Fortunately, the electric start system simplifies the process through the touch of a button. When you press the button, electricity flows to the battery. Electricity then spins the gears on the crankshaft. On the other hand, kick start requires you to step on the ratcheting lever until it spins the gears on the crankshaft.

As an engine runs, a lot of heat is produced. If the engine is not cooled, it could break down. This motorbike uses liquid as a cooling agent for its engine to prevent such an occurrence. This cooling system is more effective than air-cooled systems since they do not break down as often. The liquid keeps the engine cool throughout, while in air-cooled systems, the motorbike would have to trap air and direct it towards the engine. Sometimes, not all the air may reach the engine hence being susceptible to overheating. Another benefit of this cooling system is that it eliminates noise. Contrary to popular belief, exhausts are not the only culprits of noise. According to Moto Fomo, engines also generate noise. The engine noise is due to mechanical chatter. Liquid reduces noise by absorbing it. So, if you do not want to be a nuisance to your neighbors, this bike is the best to get. Lastly, this cooling system delivers high power to this motorcycle in terms of horsepower. Since the engine is cooled at all times, its components can function throughout without slowing down. What normally slows down air-cooled engines is the expansion from heat. Also, by staying cool, the engine has a high tolerance, enabling you to take off with ease.

This motorbike relies on a chain drive transmission. The transmission system consists of multiple chains which transmit power between sprockets. This power is generated mechanically when the prime mover rotates, causing the chains on the sprockets to also rotate. The advantage of this transmission is that it is easy to service the chains. Their ease of repair stems from their simplistic design. Another reason for their ease of service is that you can take them out without needing to dismantle the entire motorcycle. Though they are easy to service, the chains need constant maintenance. Failure to maintain the chains regularly means you could be stranded when the motorbike stalls. Another benefit of this transmission is its shock absorption feature. Have you ever ridden on a bumpy road? If you used a motorbike without shock absorption, you realized how uncomfortable it was whenever you rode over bumps. With this bike’s shock absorption feature, you will not feel the impact of bumps on your body. Also, its shock absorption features block body sensations you would get from sudden braking or accelerations.

The 1997 Kawasaki ZX motorbike is everything you desire in a sports bike. For instance, it has high power and a fuel-efficient engine system. Imagine the embarrassment of using a motorcycle that does not take off or runs out of fuel in a sporting event. You would lose the race, but luckily this motorcycle solves that problem by having an engine that uses liquid as its cooling system. Although people value convenience in a motorbike when riding it, people should also consider the environmental aspect. This bike solves common environmental concerns such as noise and air pollution. Pollution is dangerous to people health-wise, but it can pose legal problems to you. In some states, you could be charged for polluting the environment. So, to avoid such problems, consider this bike which will not get you into any trouble of some kind.