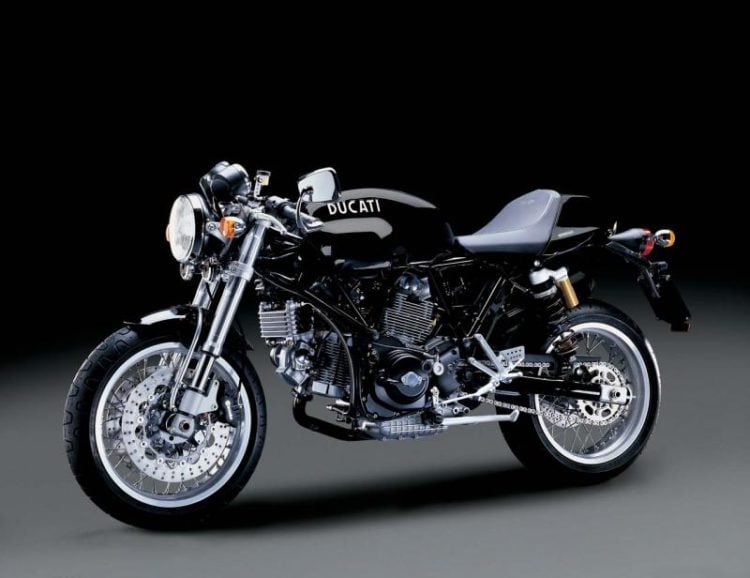 In 2003, Ducati showcased its new range of retro-inspired motorcycles at the 2003 Tokyo Motor Show. Two years later, its Sport Classics line hit the market for the first time: over the next 5 years, various models would be released, all built around Ducati design chief Pierre Terblanche’s vision of creating a style of bike reminiscent of the bike used by Mike Hallwood during his victory at the Isle of Man TT. While each bike came with a different aesthetic, each was based around the same frame as Hallwood’s legendary bike of yore and powered by the same Desmodue 992 cc (60.5 in3) air-cooled 90° V-twin Ducati 1000 Dual Spark engine. First of the releases to hit the market was the Sport1000, a classic single-seat café racer produced in a limited edition run between 2006-2009. Between 2007-2009, Ducati fans could get their hands on a new Sport1000S, which bore the same front suspension as the Sport1000, but with the addition of a retro-style fairing to create a late ‘60’s, early ‘70’s vibe. 2007 also marked the release of the GT1000, which utilized the same steel trellis frame as the Smart1000 but added various components to create a classic tourer.

In addition to the Sport1000, 2006 saw the release of a very special limited edition, the 2006 Ducati Paul Smart 1000LE Sport Classic. The model took direct inspiration from the 750 Imola Desmo legendary racer Paul Smart rode to victory at the Imola 200 in 1972. Further to Smart’s early ‘70s success, Ducati engineer Taglioni decided to capitalize on the attention surrounding the brand by introducing a new line of production models based on the same aesthetics and functionality as the 750 Imola. His decision heralded the beginning of a new chapter in Ducati’s racing history and sparked the era of the big-bore twin, sports bike. It also inspired one of Ducati’s most classic creations, the 1974 Super Sport 750. Combing the performance characteristics of Smart’s 1972 750 Imola Desmo with a new, trend-setting aesthetic, the 1974 Super Sport 750 boasted Ducati’s “round case” Bevel Drive twin engine complete with the Desmodromic valve actuation system, a sophisticated fairing and a metal silver bodywork accented by a sea-green frame. More than 30 years after the release of the self-styled “ultimate sports bike”, Ducati revisited its legendary creation one more time with the 2006 Ducati Paul Smart 1000LE Sport Classic. With production limited to just 2000 bikes, the edition has become one of the most desirable Ducati models to ever be released and, in bad news for the cash-strapped, one of the most expensive.

As New Atlas notes, the 2006 Ducati Paul Smart 1000LE Sport Classic features an elegant styling perfectly complimented and enhanced by the rounded curves of the fairing and fuel tank. The black chrome exhaust system with accents of sanded stainless-steel bears twin stacked silencers to the right of the bike, while the steel tube swing arm comes with a signature elliptical “GP” style right leg to make way for the position of the new exhaust system. In terms of functionality, the bike takes things next level with a perfectly balanced torque and horsepower performance. Although inspired by the bikes of the past, the Paul Smart doesn’t shun modern advancements but instead manages to introduce state-of-the-art components without compromising the vintage aesthetic.

The use of Ducati’s ALS 450 steel tubular trellis frame gives the bike exceptional handling, while the frame’s design allows for confident riding in even the poorest of conditions. Elsewhere, the bike features a wheelbase of 1425 mm and a trail of 103 mm- the slightly longer wheelbase (compared to most modern designs, at least) serves to amplify the vintage feel. As with the Sport 1000, the Paul Smart comes with clip-on handlebars, although the ones on the Paul Smart are positioned 20 mm lower than the ones on the Sport 1000.

As per the good people over at Total Motorcycle,  the full chassis spec is as follows:

Like the Sport 1000, the Paul Smart features a welded tube swing arm with an outer diameter of 60mm, a wall thickness of 2mm, and a simple system for adjusting drive chain tension. The cross-member ensures excellent precision, while the overall design of the system is reminiscent of those used on 1970s era bikes (but with a more robust, contemporary functionality).

The Paul Smart manages to combine contemporary components for great riding with a vintage style that evokes immediate memories of the bikes of the 1970’s. The attention to detail is flawless: from the rounded curves of the fairing to the distinctive shape of the seat (which features a double-stitched cover and an embossed Ducati logo) to the gleaming chrome fuel cap to the unique steering head, no component has been overlooked.

Like all other models in the Sport Classics line, the Paul Smart is powered by the Desmodue 992cc air-cooled twin-cylinder, Ducati 1000 Dual Spark engine, a powerful beast that’s considered to be one of the most innovative air-cooled L-twin available. Full spec as follows: