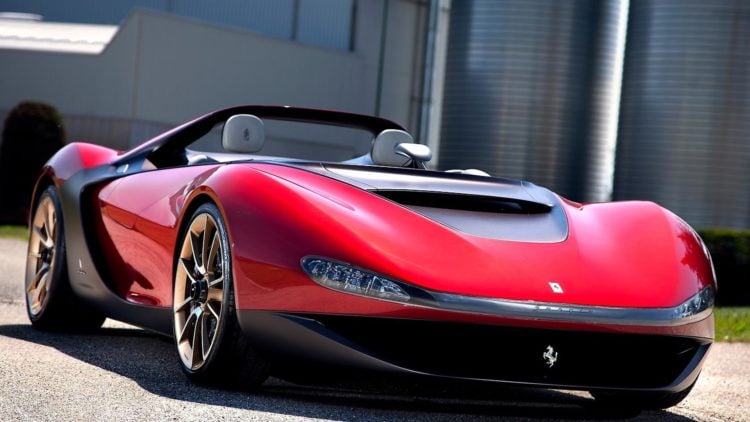 If there is any concept that truly embodies the partnership between Pininfarina and Ferrari, then it must be the Ferrari Sergio. The concept was first released to the public during the Geneva Motor Show in 2013 as a tribute to Sergio Pininfarina – the late former chair of the company and automotive designer who had passed on a year earlier. Reports that the model had been scheduled for production first came out in 2014, and in August the same year, a new report surfaced indicating that Pininfarina and Ferrari were building some commercial models of the concept. In 2017, the long wait came to an end: it was then announced, officially, that the maiden vehicle had arrived at the YAS Marina Circuit in Abu Dhabi.

Pininfarina and Ferrari, the architects behind the concept, created about six versions of the supercar – with each having a valuation of three million US dollars. The price tag might seem way more than a majority of people can afford, but the six people who Ferrari asked to snatch the limited-edition really did get value for their money. The vehicle is not only beautiful and aesthetically appealing; it is also extremely driver oriented. According to the press release used during its launch, the car is an authentic open-top model that references the track, intensifying the sense of sportiness and fun behind the wheel, and the pleasure of pure designs.

Each of the Ferrari Sergios vehicles was custom made to suit the owner’s requirements in Maranello where there was a large workshop with enough equipment to ensure that every car suited the owner’s personal preferences and tastes. The end result was that each car was beautiful, fast, and unique in its own way.

The exterior body of the Ferrari Pininfarina Sergio is a work of art. The car is a simple design that throws you back to the 70’s and 60’s, with an exceptional color scheme that combines the rear and front end to form an expression that is streamlined and angular. The original styling prompts, which were based on the 458, are visible on the rear.

The inside is highly customized, with the leather furnishings offset by visible red stitching and heaps of carbon fiber and Alcantara seat inserts. Beyond the Sergio nameplate that is fixed onto the passenger’s side dash and the personalized interior decor, the rest of the car’s interior looks exactly like what would be found on a 458. Just like the 458, the Ferrari Pininfarina Sergio has highly bolstered seats, a formula 1 inspired steering wheel, large paddle shifters, and buttons to choose between driving options.

Just as in the interior, the drive train is not different from the 458. More specifically, the Sergio features a 4.5-liter V8 engine that puts down about 400 pound-feet of torque at over 6000 rpm and approximately 596 horsepower at an astonishing 9000 rpm. The car’s dual-clutch gearbox ensures that the car can speed to sixty miles per hour in just under three seconds and a top speed of 200 miles per hour.

While it was not officially communicated, it would reasonable to think that the high valuation includes a similar Side Slip Angle Control Application System found in the 458 Speciale which features an E-Diff and an F1-Trac. The application ensures that the car has maximum adhesion between the road and the contact patch.

At three million US dollars, the Pininfarina Sergio ranks among the most costly cars offered by Ferrari. However, the first six examples have already been sold – further bringing to light the desirability of a customized, limited-edition Italian machine. This vehicle is certainly a great piece of art; a worthy investment.

Once you start thinking of concepts that can turn the heat to a limited-edition production concept, the Lamborghini Veneno must come to mind. Just like the Ferrari Sergio, the Lamborghini Veneno was first presented at the Geneva Motor Show in 2013, and it features a design nearly identical to its coupe competitor. When it comes to styling, the Lamborghini would surely give the Sergio a run for its money. Moreover, with a 5.5-liter V-12 engine that can produce about 750 horsepower and at a feathery weight of 3278 pounds, the Lamborghini prides in a superior power to weight ratio of about 4.38 pounds per horsepower. Such engine capacities and weight specifics mean that the super car can sprint to 60 miles per hour in less than 2.8 seconds with a maximum speed of over 221 miles per hour. There is a downside though: if you considered three million for the Ferrari Sergio to be too high, then you are in for a shocker since the Lamborghini sells at 1.5 million US dollars more.

Pininfarina came up with a concept vehicle that renews the values and spirit of the achievements realized under the late Sergio Pininfarina. The company has projected such achievements in the form of innovation, exclusivity, and passion. This concept car is, in very many ways, in line with the approach that has enabled Pininfarina to generate numerous creations that ended up redefining automotive boundaries: the ability to combine intelligence, creativity, elegance, technology, and passion in a bid to further the brand’s genetic characteristics. The Ferrari Pininfarina Sergio is a mixture of elegant simplicity and aesthetic balance that ensure that it will remain resistant to changes in fashion and taste in the long run.

At first glance, you will be shocked to find out that the Sergio design only took four months to go from just a logical idea to production. Intended to be homage to the person responsible for strengthening the relationship between Ferrari and Pininfarina, the Ferrari Sergio surely amalgamates technical sophistication and distinctive styling subsequently creating a piece of art: something beautiful, highly desirable, and unique. However, with the pricing at three million US dollars, many willing drivers will be taken aback. That is a price tag that can surely put you in the same level as an FXX K or even a total of ten Speciales.