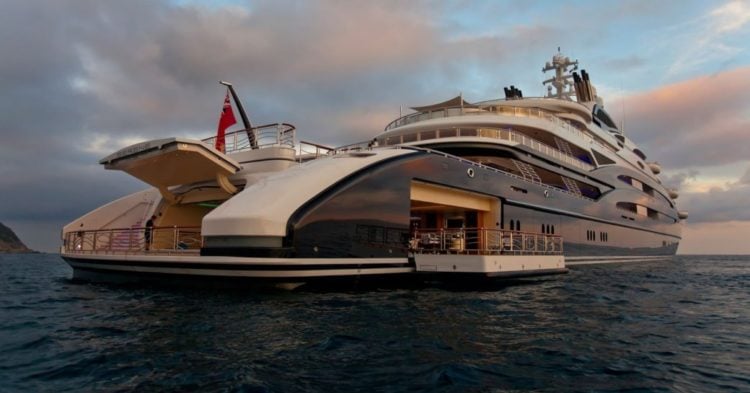 While many people must scrimp and save to afford a family holiday, that is not the case for the rich and famous, who have the financial means to go wherever they want whenever they want. You will not find them in budget motels or trying out a destination’s free attractions. Instead, wealthy people can choose the most luxurious accommodation and unique experiences possible for their vacation. One such person who can afford these luxuries is Bill Gates who, with a personal net worth of $95.4 billion, is the second richest person in the world. He has even chartered a yacht worth $330 million to enjoy a vacation with his family.

According to Boat International, Gates chartered a yacht called ‘Serene’ for an estimated $5 million per week. He did this to enjoy a break away with his wife and three children. The family enjoyed a week together on the yacht just off the coast of Porto Cervo, Sardinia, in August 2014.

The 133-foot yacht is one of the largest in the world, and it is owned by Yuri Scheffler, the Stolichnaya vodka magnet. This yacht was delivered to him in 2011, and he has had it on the charter market ever since. Built by the Italian shipyard Fincantieri, it has a rather impressive crew of 53 to take care of the needs of those who charter the yacht. So, what is on the inside of this ship to make it such an amazing experience that is worthy of the high price tag?

The Yacht Charter Fleet has ways for its travelers to enjoy activities both off and onboard. The helipad is available so that guests can take trips to the mainland to enjoy a little sightseeing, a meal in a restaurant, or a local activity. There are also jet-skis available for some fun one the waves around the boat or to travel back to the mainland to enjoy some time away from the yacht. Furthermore, the yacht has its very own submarine. However, you might wonder why anyone would want to get away from the yacht when there is so much to enjoy onboard, including activities for children. Just some of the activities and amenities on board for entertainment include a climbing wall, a trans-deck waterslide, a snow room, a playroom, multiple pools, and a cinema. This means that there are plenty of things onboard to keep the children entertained.

This yacht is not all about the kids having fun, as there are plenty of things for the adults, too. In fact, Serene has a myriad of amenities spread over its six decks that make this a unique way to vacation. From the outside, one of the ship’s most impressive features is its supersized bathtub on the sun deck. The award-winning Serene has a private beach club that has a secluded sunbathing area and a sauna. There are also two Jacuzzis and a sundeck dance floor. Opposite the relaxing hot tun tucked underneath the ship’s observational deck is a fully stocked wet bar with extra sun loungers. 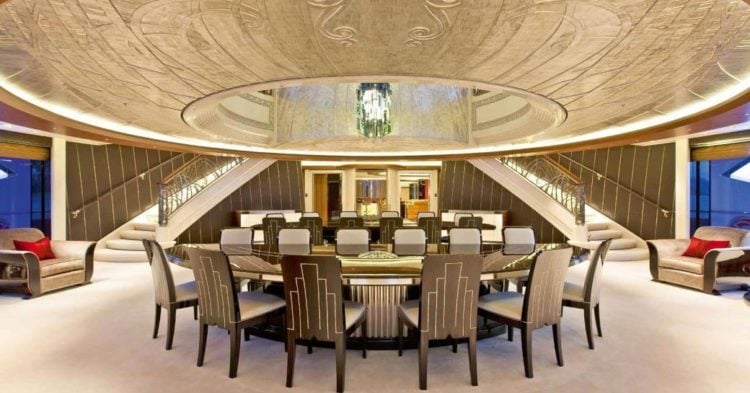 Two of the indoor living and entertaining spaces include a cocktail lounge and a piano bar, while outdoor there are various al fresco dining areas, such as a wet bar, a barbeque, a Teppanyaki grill, and a pizza oven. An unusual space in this yacht is the underwater observation lounge, which many people would find a relaxing area as they watch marine life existing in tranquility around them. Serene also has rather impressive accommodation and it can accommodate up to 24 guests. There are 12 luxurious staterooms, include a master suite, a VIP suite, seven double suites, and three twin cabins. The interior design is the work of Espen Oeino with styling by Reymond Langton. The duo has created living spaces that are stylish and opulent while also being comfortable and versatile.

One of the most impressive areas in terms of styling is the sky lounge. This room is decorated in shades of cream that is accented by darker colors and finished with wooden fixtures. It is equipped with sofas, chairs, and coffee tables for relaxing, and boasts some of the most impressive views from the ship which you can view from almost any vantage point. Another fantastic space is the main lounge, which is a more formal area for entertaining. The main color used is white, which gives the room a bright and airy feel, and some warmth is added with darker tones. Central to the room is a piano, which is surrounded by cocktail tables. An unusual feature of this room is its chandelier. The lounge is located directly above the main dining area, and the chandelier drops between the two rooms. A double staircase leads down to the chic dining area below. It is set to accommodate a maximum of 24 guests and features two 12-seater tables. However, there is the possibility of entertaining even more people as the tables are extendable and there is plenty of space. This means you can host a banquet in this room. Floor-to-ceiling windows on both sides of the rooms give spectacular panoramic ocean views.

Bill Gates’ time on the yacht with his family is part of his plan to take a more relaxed approach to life and to spend some time away from the office. He has said that he doesn’t have the energy he had when he was younger and plans to balance running his Microsoft Empire and enjoying time with his family better now that he is older. This includes taking vacations away with his loved one. Serene and other chartered yachts are the perfect way for this billionaire businessman to relax and have some fun in comfort and privacy.

Since Gates’ vacation on the yacht, Scheffler has sold the superyacht to Mohammed bin Salman, the deputy crown prince of Saudi Arabia says Yacht Harbor. The Saudi Arabian royal paid a whopping $458 million for the yacht in July 2015. The yacht was once the ninth largest in the world, but it has now dropped into the 15th place because even more impressive superyachts have been built since.

The 20 Best Things to Do in Scranton, PA for First Timers

A Closer Look at The 2022 Hyundai Tucson