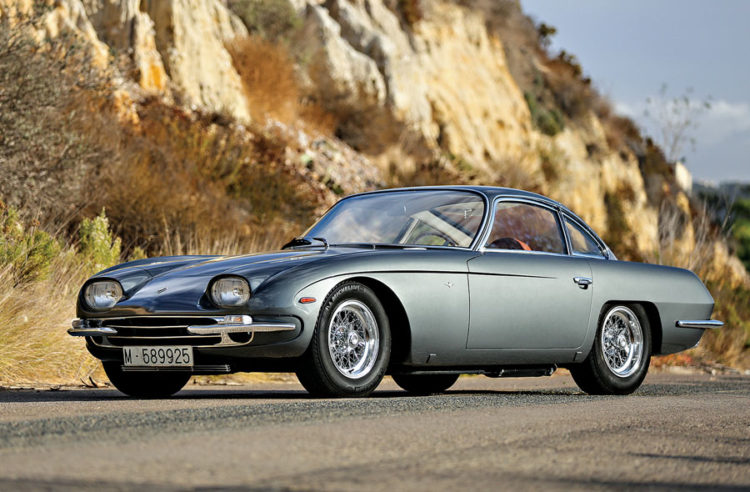 The Lamborghini 350 GT was the first vehicle that Lamborghini produced. The vehicle’s production began in May 1964. That was after it was well-received at the Geneva Motor Show in March 1964. The vehicle’s success ensured the company’s survival after establishing it as a Ferrari sports car.

Back in the early 1960’s, Ferrucio Lamborghini took his Ferrari for a simple repair. Back then, Ferrucio focused on manufacturing tractors from demilitarized equipment and did not intend to build supercars. When he took his Ferrari for the repair, he approached Enzo Ferrari and complained about his vehicle’s clutch. However, Enzo did not take the complaint positively. He dismissed Ferrucio’s complaint and asked, “What does a tractor manufacturer know about fast cars? Leave the supercars to me and return to your farm.” Ferrucio felt insulted and decided to take back his Ferrari home to fix the problem himself. He used a tractor’s clutch and that was his first step in his journey into the automotive world.

At that time, people thought that Ferruccio was foolish to think that he could compete with Ferrari. However, the strong-willed Italian who had built an empire through his successful tractor business branded Lamborghini as well as other businesses proved them wrong.

According to topspeed.com Ferruccio acted fast and by 1963, he established Automobili Lamborghini SpA and built a modern factory in Sant’Agate Bolognese, which is close to Modena, Ferrari’s birthplace. The biggest issue Lamborghini had with Ferrari supercars was their low quality. To avoid that, Ferruccio hired the best car engineers and designers. He went on and hired Giotto Bizzarini the designer of some of the most recent Ferrari engines along with two highly talented engineers Giampaolo Stanzini and Giampaolo Dallara. Ex-Bertone designer, Franco Scaglione came up with the vehicle’s styling. He was responsible for various Italian masterpieces like the Giulietta Sprint and the Alfa Romeo B.A.T.s.

After equipping his company with a talented team of petrol-heads, Ferruccio came up with his prototype car the Lamborghini 350 GTV. The vehicle was the first 3.5-liter V12 supercar that Lamborghini produced. In 1963, the vehicle was first unveiled to the public at the Turin Auto Show. The two-seaters two-door prototype featured a Bizzarini designed 343HP 3.5-liter V12 engine at the front axle supplied power to the rear wheels through a manual five-speed gearbox.

The new Lamborghini 350 GTV created a stir in the media. That was because of its looks and the fact that it was a challenge to Ferrari. At the Turin Auto Show, Ferruccio Lamborghini came across Carlo Anderloni who was famous for building several Alfa Romeo bodies. The two joined forces and decided to come up with a more feasible version of the prototype 350. A few months later, the two introduced a redesigned 350 GTV version and named it the Lamborghini 350 GT.

The vehicle was presented in March 1964 at the Geneva Salon showing off its streamlined chassis, new tamed engine, among other elegantly designed bodies. Compared to the Lamborghini 350 GTV prototype, Carrozzeria Touring of Milano toned down the styling of the Lamborghini 350 GT. The chief engineer Gian Paolo Dallara was responsible for modifying the V12 into a production. He joined forces with Bob Wallace and created an engine that could deliver 280 horsepower, at 6,500 rpm. That is with the help of a wet sump lubrication system as well as a 9.5:1 compression ratio.

The Lamborghini 350 GT could get up to a top speed of 250 Km/h with a configuration of two electric Bendix fuel pumps, six dual 40DCOE, and 2 Weber carburetors of 100 Octane fuel. The vehicle could accelerate from 0 to 100 Km/h in 6.8 seconds. Similar to the concept Lamborghini 350 GTV, the production version had an aluminum body and a four-wheel independent suspension. 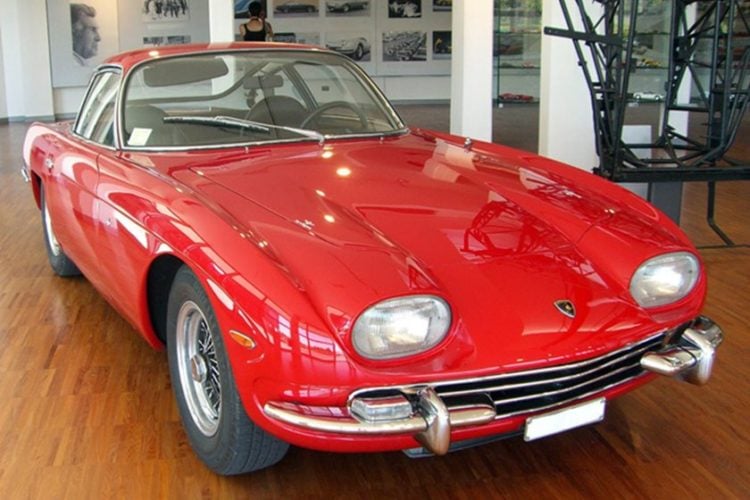 The Lamborghini 350 GT came with a V12 aluminum alloy engine that ran through a manual ZF five-speed gearbox. The vehicle had:

The motor design of the Bizzarrini’s GTV “racing” chassis was the basis of 350 GT Dallara’s street chassis. Designers found that the Lamborghini GTV chassis was not suitable for a street vehicle since its construction was meant for lightweight, and its door spacing was small since it was obstructed by tubing. The designers used large 60 mm square-section steel tubing to redesign the Lamborghini 350 GT. The manufacturers used the steel tubing at the central “floor” with the rear and front cradles from a 25 mm and 50 mm tubing to hold the vehicle’s engine. The design provided customers with easy exit and entry of the vehicle using the doors. It also provided substantial support to attach the body of the vehicle. 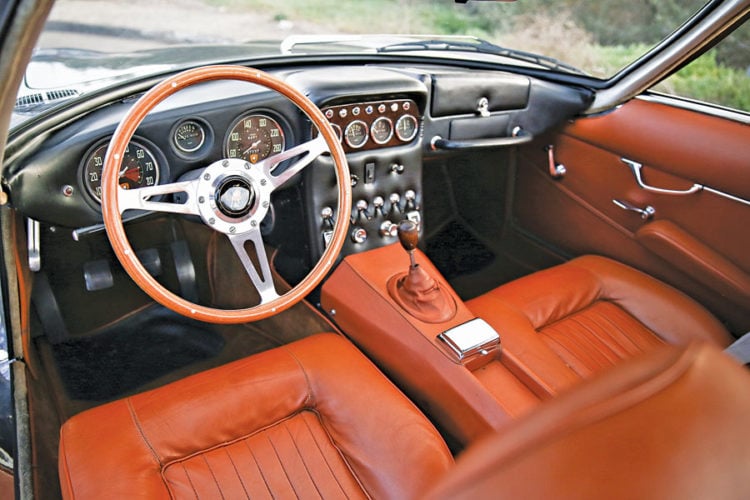 The vehicle’s suspension was entirely independent. It had Coilover shock absorbers and wishbones of different lengths. The Coilover assembly at the rear was located behind the wishbone mountings suspension. The suspension wishbones at the back were unbalanced front-to-back. The rear wheel hubs were brought together to the spring mountains by suspensions that had an offset. The arrangement improved torsion resistance and enhanced the stability of the vehicle when accelerating and braking. The manufacturers equipped the Lamborghini 350 GT with anti-roll bars at the rear and front.

The quality assessment of early engines of 3,464 cc (3.5 L) was high. According to Wikipedia the experts tested each engine using a Schenk Walge dynamo-meter for 24 hours. In the first 12 hours of testing, experts could run the engines under electric power and with gasoline for the remaining 12 hours. Before installation began, the professionals made a comprehensive analysis of the engine’s behavior after a mixed-test running for around 500 kilometers.

Immediately Automobili Lamborghini SpA officially released the vehicle for a road test, it impressed most car enthusiasts and journalists. It was a smooth-running, and high-performance vehicle that was technically advanced than Ferrari or any other high-end vehicle. That was only the beginning of Lamborghini.

During the early production of the 350 GT, manufacturers used the single bumper at the front. The bumper ran from right to left over a grille that had vertical fins. Most owners however, replaced the setup with a two-piece split bumper and a different grille to enhance cooling. Another interesting story was the vehicle’s front had a Raging Bull crest. Some 350 GT manufactured earlier displayed a two-tone background with a diagonal red and white design. As reported by lambocars.com some 350 GTs have a two-tone badge and a dark blue design without the red part.

Ferruccio had the Raging Bull series, which a contractor produced. He got several designs including white and dark blue background, white and red background, and the common black background that he choose to fit in his vehicles. This is the reason why some Lamborghini’s with diagonal badges, especially the first vehicles delivered. Several sources claim that all the owners of these vehicles were issued with the black Raging Bull badge for their cars. A number of owners decided to keep the unique and rare badge with two-tone.

During the first production year of the 350 GT in 1964, the automobile delivered 13 vehicles to its customers. The manufacturer finished the first vehicle in metallic silver. Later on, the 350 GT had a large air intake at the front and two horizontal divisions. The production experts split the bumper into two sections and the center was left open to increase the vehicle’s cooling rate. Some of the vehicle’s bumpers had overrides to protect the radiator. The vehicles were available only in specific areas. At the windscreen front, the manufacturer added two round vents, and under the vehicle’s license plate, they mounted a backup light.

Inside the vehicle’s central console housing four dials, manufacturers installed a polished aluminum panel. The Lamborghini 350 GT models manufactured later had leather finishing similar to the dashboard. Behind the dials of some vehicles, manufacturers had installed a wood-like vinyl plaque. In recent days, one can come across a Lamborghini 350 GT with its plate painted black. These vehicles are more than 50 years old now, and it can be difficult sometimes to determine original components and parts after restoration.

In 1966, the factory contacted Lamborghini 350 GT owners to upgrade their engine to the 4.0-Liter. Therefore, one can come across a 400 GT and a 350 GT running a 4.0-liter engine. Automobili Lamborghini SpA only manufactured 23 vehicles with that engine. Three cars out of the 23 were produced in skinned aluminum while the rest were produced in heavy steel.

Today, it is difficult to find a 350 GT Lamborghini since the Automobili Lamborghini SpA only produced 120 units. Getting an original vehicle with the early aluminum body to restore and run it can be costly. However, they are the first vehicles Lamborghini produced in Sant’Agata. Most people consider the Lamborghini 350 GT a crucial piece in the automotive industry. It is essential to note that the last bodies of the 350 GT that Touring delivered were steel, not aluminum.