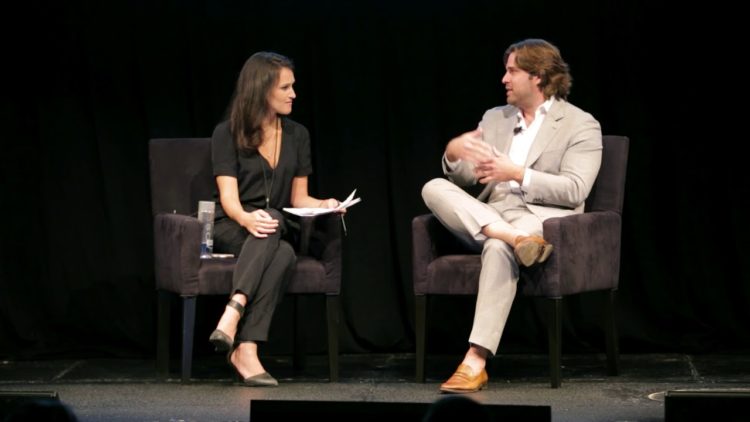 Baxter Box is one of the co-founders of LTK, which might be more familiar to interested individuals as rewardStyle and LIKEtoKNOW.it. Currently, he occupies the position of CEO, meaning that he is responsible for overseeing its operations. Besides this, it should be mentioned that Box is married to Amber Venz Box, who is also a co-founder of the company.

1. Went to the University of San Diego

Box went to the University of San Diego, which is a private Roman Catholic university that can be found exactly where its name says it can be found. There, he studied electrical engineering as well as mathematics.

Speaking of which, both Box and his wife are Texans. In fact, he went to high school in Dallas, TX, so it seems safe to say that he has a longstanding connection to the area.

4. Worked As an Engineer

Box made good use of his bachelor’s degree in engineering by working as an engineer at Restech. There, he was involved in a number of notable projects. For example, Box improved the Dx-pH Measurement System before bringing the improved version of the product to market. Similarly, Box designed the Dx-Sleep Adapter before bringing the resulting product to market. Eventually, Box was entrusted with managerial duties, as shown by how he was responsible for leading a team of engineers at one point in time.

5. Worked As a Sales Manager

Curiously, Box made the choice to switch over to being a sales manager when he was still at Restech, which isn’t exactly the first thing that would come to mind considering his work as an engineer. Still, considering that he was responsible for bringing products to market, it seems safe to say that he had applicable expertise and experience that carried over. After all, successfully bringing products to market requires at least some understanding of the market, which is definitely the kind of information that can be used in sales. In any case, Box was involved in training sales representatives as well as managing sales representatives as a sales manager. Furthermore, he apparently did quite well in the position, as shown by his claim that he increased sales in his assigned territory by 300 percent.

6. Worked As an Analyst

After Restech, Box went to Bonanza Capital. However, he didn’t continue working as a sales manager, which makes sense considering the name of that company. Instead, Box became a trader as well as a technology research analyst. In particular, he was focused on the tech, media, and Internet sectors. Something that is perhaps unsurprising considering the tech-based offerings of the company that Box runs in the present time.

LTK wasn’t the first time that Box has either founded or co-founded a company. In 2008, he founded NastyGoat Corporation, with the result that he served as both its President and its Chairman. As for what NastyGoat Corporation does, it is apparently concerned with incubation, investment, and development.

8. Believes in the Importance of an Inspiring Work Environment

Box has written about some of the insights that he picked up while visiting Alibaba’s campus. To name an example, he mentioned the importance of an inspiring work environment. Box was commenting on inspiring architecture. However, it is a well-known fact that people’s surroundings have a huge effect on their happiness, which in turn, has a huge effect on their productivity. This is particularly true because the state of the working environment also says a great deal about the company’s level of consideration for its employees. Unsurprisingly, employees who aren’t valued tend to be less than enthused about giving their employer their best but will instead tend to do what they can get away with.

9. Believes in Making It Easier for Employees’ Work Life to Flow Into Their Personal Life

On a related note, Box also wrote about making it easier for employees’ work life to flow into their personal life. Essentially, he means that companies should make it easier for their employees to access everything that they need to live well. Having said that, Alibaba straight-up built a campus, meaning that it has a lot of influence over what businesses can be found nearby because it straight-up paid for that kind of influence. For that matter, even if companies choose to rent a location rather than build a location, it seems safe to say that desirable locations are going to come at extra cost. As such, while it definitely makes sense because of the role that convenience has on most people’s satisfaction, it isn’t hard to see why companies might put this at a lower priority than other considerations.

Box’s final point was the importance of clearly communicating the company’s vision. Unfortunately, this is one of those things that are much easier said than done. This is particularly true because visions are often somewhat nebulous by necessity, which makes it difficult to get their substance across to those who are supposed to hear it. Still, it is difficult to deny the usefulness of communicating a company’s vision to its employees. To name an example, understanding the vision gives the stakeholders an idea of what the company is about at the highest levels, which in turn, gives them something by which to evaluate their decisions on the basis of whether they make sense for fulfilling the company’s overall aims or not.