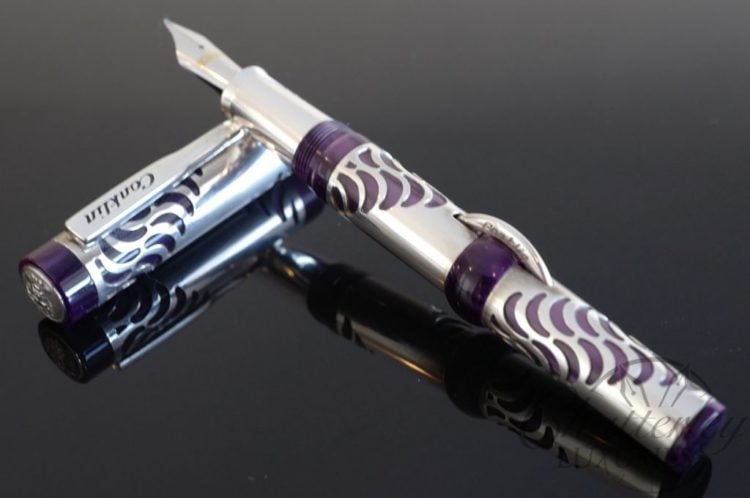 Connoisseurs of fountain pens gravitate towards high-quality writing instruments which have particular attributes. For these individuals, not just any pen will do. There are pen collectors who go for unique and valuable pens as well as those who love elegance and extravagance. Whatever the case, Conklin Pens are among the most popular brands for those with discriminating tastes in their writing implements. If you fall into any of these categories then we have a special treat for you. We’ve put together a collection of the ten best Conklin pens for your consideration and enjoyment.

This model is based upon the signature model which was the first self-filling pen, release in the year 1897. The Conklin Mark Twain Crescent Filler Fountain Pen is named after the great American Author Mark Twain, who also served as the Conklin brands official spokesperson. This specific edition features a spring-loaded rocker clip which dates back to 1916, offering reliable and smooth writing function. The pen is handmade in Florance Italy and it features a nib that is manufactured in Bock, Germany. The band is proudly engraved with the signature of Mark Twain. The body is made of high-quality resin and decorated with rose gold accents.

The Empire fountain pen in the oatmeal styling is a member of a collection that the brand released in celebration of its 120th year in the pen making business. This pen lends a nod to the vintage era coupled with modern styling. It’s based upon an Art Deco genre and its name refers to the skyscrapers which rise high into the skies of the cities. Special features include a sculpted body and tapered ends crafted of acrylic resins which give off a shimmering glow, hand made with hand painting on the cap with an old style clip which is a hallmark feature of the brand.

This special and limited edition pen joined the Empire model in celebration of 120 successful years in the fountain pen making business. A limited number of 120 pieces of red, blue and orange were created in the limited production run. These pens are well known and appreciated for the fact that they carry more ink in their bodies than most other fountain pens. These are among the top tier within the brand and are considered to be highly collectible because of the low numbers which were produced.

The Nozac Piston Fountain Pen Israel 70 is a special limited edition pen that has become an iconic pen for the brand in a new eight-sided design made of brilliant acrylic resin with a high polished finish and chrome silver accents. This pen was made in celebration of the nation of Israel’s 70th anniversary. It is a fountain pen with a cap that is a darker blue marbled design and the barrel is a lovely ivory color. The pen is filled through Conklin’s unique internal piston filling system. This is a remake of the 1931 version of the original pen, hence its vintage persona and it also serves as a tribute to the great Theodore Herzl who became known as the father of Israel in the engraved coin placed along the cap top bearing a depiction of the famous author and statesman.

The Conklin Matte Carbon Stealth Fountain Pen line is one of the most popular high-end members of the Conklin collection. This pen is a Mark Twain Crescent with the added distinction of being a Matte Carbon Stealth variation of the fountain pen. It’s offered with the Conklin log at the top of a blue leather box in printed gold. The cap and barrel are made of carbon fiber which gives it a distinction as a variant of the popular Mark Twain edition. It is also made of glossy resin for the cap and the end of the barrel giving it some attractive accents with a spring-loaded clip design. The pen opens easily and is not only highly functional as a premium writing instrument, but it is also immensely attractive.

The Herringbone Fountain Pen is an affordable version of the luxury brand’s collection featured in a navy blue color and an Omniflex nib. It’s a popular model that also has an available ballpoint pen which matches, sold separately. The cap is a screw on type. This is a lovely pen that is made with lacquer and an epoxy finish with engraved aluminum and silver colored accents. It is sold with an attractive gift box, one piston converter and two ink cartridges making it one of Conklin’s best values without losing any of the prestige.

The Fiber Stealth Word Gauge Clear Fountain pen is a stunning pen that is made of lightweight materials for an even and balanced feeling in the had. It’s one of the top choices or pen lovers and serious writers. It offers a smooth flow of ink with the piston filling system unique to Conklin. You can see the amount of ink through the clear viewing window to avoid running out. The Heritage Carbon Fiber Stealth Word Gauge Clear Fountain pen is hand made of gorgeous black resin in the country of Italy.

The Duragraph line of fountain pens was first released in 1923. This high-quality pen became an iconic model for the brand and became intensely popular among pen lovers. They recently launched a new line of the Duragraph to celebrate the 91st anniversary of its inception, and it serves as an heirloom passed down through generations. The new line comes in a variety of colors all handmade of attractive resins.

The Harlequin Fine is a customized edition within the Empire fountain pen line. This model and variant are one of the most highly prized by collectors and enthusiasts because of its smooth and fine ink flow and its attractive styling. It is a fountain pen that has a vintage feeling with a thinly tapered end and a painted cap. The Harlequin is one of the most beautiful pens made by Conklin and it is also among the most beloved.

The Conklin Empire Rollerball Pen, particularly the Harlequin edition, are wildly popular models. They come in variants which are made to match the Conklin Empire Fountain pen variations and are frequently purchased either alone or as an accompaniment to the fountain pen as a matched set. They are premium quality writing instruments which are well balanced, dependable and comfortable to write with, making them the top choice for pen collectors and enthusiasts.