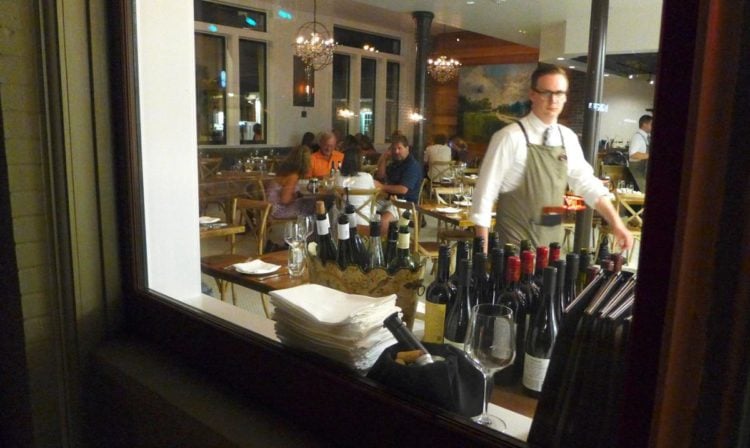 10Best says that Grand Isle is the strip of land that lies just off mainland Louisiana. It is worth taking a trip over the bridge just to sample the food at Grand Isle Restaurant. There is a welcoming ambiance at this restaurant, and the walls feature vintage photographs. Only fresh, local seafood is served at this restaurant, and Chef Ryan Haigler has created an imaginative menu that is based on Louisiana classics with a twist. There are also options for meat lovers, such as various cuts of steak. Husband and wife chef team Alison Vega and Drew Knoll run this vibrant seafood restaurant in Bucktown. It has a fun vibe with huge photographs of the family fishing hanging from the walls. This lively restaurant gets very loud when it is busy, so don’t expect a quiet meal. It is ideally suited to a fun meal out with friends. The owners had spent a decade working in the Caribbean before opening this restaurant, and their experiences and the Caribbean culture have inspired many of the dishes on the menu. However, the culinary traditions of Louisiana are also evident in the offerings. This restaurant has both indoor and outdoor seating options.

For those that want to dine somewhere with a lively vibe, Felix’s Oyster Bar is a good option. As the name suggests, oysters are a key element to the menu. You can eat them freshly shucked or have them served cooked with options including chargrilled, Rockefeller, and Bienville. You can order any of the seafood on the menu fried, which is a popular option amongst regulars. This is a reasonably priced venue that stays open until either 10 pm or 11 pm depending on which night you visit. It is ideal for hanging out with friends, although it is also a family-friendly venue. Located on Canal Street, Bourbon House Seafood & Oyster Bar is a classy establishment that is often frequented by business travelers. The key ingredients used to create the dishes served here are all fresh, seasonal, and from the Gulf of Mexico. The staff are very welcoming and attentive, so it has become known for its high level of customer service. A visit to this venue is not complete until you have tried one of the many fine bourbons. An interesting fact about this restaurant is that it is home to the New Orleans Bourbon Society. Executive Chef Dane Harris is at the helm of this seafood restaurant, and he uses only fresh and seasonal ingredients in the preparation of his French-inspired dishes. His cooking methods are modern, and he combines flavors perfectly. The oysters are one of the highlights of a meal here, and they are available raw or cooked in a variety of formats. Although seafood constitutes the majority of the menu, there are also options for meat-eaters, such as rustic burgers or decadent beef tartare. This sophisticated venue is also known for its cocktail program, which features innovative cocktails designed especially for the restaurant by veteran bartenders. If cocktails are not your thing, there is also a diverse selection of craft beers and an extensive wine list. Chef Jeffrey Hansell co-owns Ox Lot 9 with his wife, who is the general manager of the restaurant., says 10Best. It is a fantastic addition to the Northshore dining scene as this sophisticated bistro pays homage to the seafood of the Gulf Coast. Hansell adds a Southern twist to each of the dishes, such as adding okra to the bouillabaisse. Some other imaginative offerings on this menu include oysters poached in Pernod and cream and then cooked in puffed pastry and redfish topped with shrimp. Ox Lot 9 has become known as a destination restaurant, and it is just as famous for its drinks offerings as its food. There is an extensive wine list and a vast array of craft cocktails from which you can choose to complement your seafood meal. Sushi lovers should head to Horinoya’s as this is the best option for sushi anywhere in New Orleans or the surrounding area. Although Japanese food is hardly synonymous with New Orleans, it is something a little different to try from the traditional Louisiana offerings. This joint is owned by Japanese chef Komei Horitomo and his wife, and they have been running this establishment since 2001. The food is delicious and presented in a stunning manner. In 1978, a retail seafood market opened on Williams Boulevard in Kenner. Ten years later, the restaurant Harbor Seafood opened next door. Both the restaurant and the seafood market are owned by Dave Robinson. You will find the same ingredients available in the market as those that are the central focus on the dishes in the restaurant. Some of the menu options include seafood stuffed eggplant, Po-boys, and shrimp and corn chowder. There is also boiled crawfish that is served seasonally. This restaurant also has an oyster bar. A New Orleans neighborhood restaurant in Metairie, The Galley has one of the most extensive seafood menus in the city. While other seafood restaurants present a pretty standard set of dishes that do not vary much from the offerings of competitors, The Galley menu boasts a combination of classics and imaginative dishes that you will not find elsewhere in the city. Some of the highlights of the menu include the soft-shell crab platter, seasonally served boiled crawfish, blackened redfish, and Crawfish hush puppies.

If you are lucky enough to stay at the Hilton New Orleans Riverside Hotel on Poydras Street, then you can enjoy the delights of the hotel’s restaurant Drago’s. However, being a resident of the hotel is not compulsory as it is also open to the public. According to Nola.com, Drago’s is known for its oysters, especially the charbroiled oysters and Parmesan-crusted Gulf oysters. The menu also includes lobster in almost every form you can imagine. You can also enjoy some Louisiana classics, such as shrimp and grits with tasso. Red Fish Grill is located in the heart of the action as it is on Bourbon Street in the French Quarter. Ralph Brennan of the famous restaurant family is the owner of this establishment, and he has completely renovated the 19th-century building that houses his restaurant. As the name of the restaurant suggests, most of the food in this eatery is cooked on the wood-fired grill, although there are other items on the menu cooked using alternative methods. This casual restaurant also has an oyster bar.

Joe Casamento moved from Italy in 1919 and opened his self-titled restaurant in the East Riverside area. The interior is tiled in a traditional Mediterranean style, and its unique décor means the restaurant has featured in several television shows. Some items on the menu are traditional to Louisiana, such as the seafood gumbo and the soft-shell crab. Other items are inspired by Casamento’s Italian roots, such as seafood pasta dishes and spaghetti with meatballs. First opened in 1910, Acme Oyster House was originally located on Royal Street but moved to Iberville Street after a fire in 1912. This casual oyster bar has a warm glow, thanks to the neon lights. The food is fresh, classic, and delicious. Creole dishes and fried seafood platters are staples of the menu. Although the historic French Quarter restaurant is the most famous, there are seven other Acme locations in New Orleans and along the Gulf Coast.

This bistro is a considered a seafood hot spot, and it is ideally located on the corner of Iberville and Royal in the French Corner, which is known locally as the food corner. Mr. B’s Bistro has been open for decades, so it is well known amongst the locals. They serve signature dishes such as barbecue shrimp plates and gumbo ya ya. Although the interior has a chic design, the atmosphere is relaxed. Therefore, it is equally suitable for casual dining or special events. It is open for both lunch and dinner, and it is particularly busy for Sunday brunch.

Back in 1961, Deanie’s Seafood was the first seafood market to open in Bucktown. There is also a location in the French Quarter. The restaurant has a fun and casual atmosphere, and it serves classic Louisiana seafood. It is best known for the boiled crawfish, which is a dish they serve seasonally from mid-winter through to Spring. The best eatery for oyster enthusiasts is Desire Oyster Bar, which is located within the Royal Sonesta Hotel. It is in the French Quarter on the corner of Bourbon Street and Bienville Street. Creole dishes featuring Louisiana seafood is what you can expect to find on the menu, and oyster dishes are the most popular option. Another reason to dine in this restaurant is the Sonesta Art Collection, which you can view after your meal.

Galatoires is a well-established restaurant that first opened its doors in 1905. Since then, it has maintained an excellent reputation for the quality of the food served. It is also known for delivering top-quality customer service. The menu is extensive and consists predominantly of Creole dishes that feature local ingredients including gulf fish, crab, shrimp, crawfish, and oysters. You will find Galatoire’s in the French Quarter. If you enjoy seafood dishes with a bit of international flair, then GW Fins is a good option. On the menu, you will find dishes featuring seafood from everywhere from the Gulf to New Zealand. The restaurant is co-owned by Gary Wollerman and Chef Tenney Flynn. Their ethos is to serve dishes that focus on the natural flavors of the seafood rather than drowning them in heavy sauces or concealing the flavors with heavy seasoning. They also prefer to use seasonal ingredients, so the menu changes throughout the year. GW Fins is also known for its wine list, which features more than 100 labels. Borgne is named after Lake Borgne as this is where Executive Chef Brian Landry spent his childhood fishing. The menu consists of dishes that make the most of Louisiana seafood, such as Louisiana shrimp and oyster spaghetti. This restaurant is located within the Hyatt Hotel close to the Superdome. Borgne has a Happy Hour daily, which includes specials on both food and drinks. According to The Culture Trip, the best seafood restaurant in New Orleans is Peche Seafood Grill. Located in the Warehouse District, this eatery is part of the Donald Link Restaurant Group. The menu includes unpretentious coastal dishes including dishes such as grilled tuna with olive salad, catfish and pickled greens, gulf fish topped with salsa verde, and noodles with ground shrimp. This restaurant has a rustic interior, casual atmosphere, and an open kitchen.