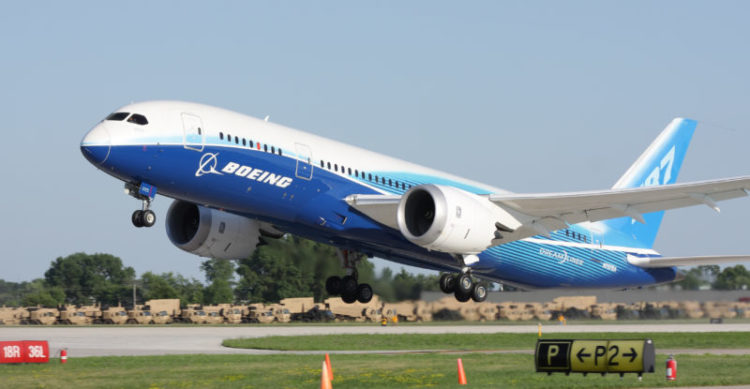 I was amazed when I visited the Museum of Flight in Seattle, Washington and had my first look at the Boeing 787 up close. We were allowed to walk though the aircraft, rightfully dubbed, “The Dreamliner.” It was a masterpiece and far nicer than any of the carrier I’d flown in personally. Interested in knowing more about the premium passenger plane, a few questions yielded volumes of new information and interesting facts worth sharing. Here are ten things you probably didn’t know about the Boeing 787.

The Dreamliner was engineered to run efficiently with either GE GEnx engines or Rolls-Royce Trent 1000 engines. It’s only fitting that some of the 787s features the indisputably high end auto manufacturer’s reliable components. Many people are not aware of the fact that Rolls-Royce also manufactures components for air craft in addition to producing some of the most exclusive bespoke automobiles in the world.

2. The magnitude of wing flex of the Boeing 787 would freak you out

The wings of the aircraft are designed to flex as a safety feature. Most people are aware of this, but when the craft was still under construction, an ultimate wing load test was conducted. When the wings were loaded to an amount that exceeded the design limit load by 150%, and held for 3 seconds, the wings surprised everyone with a 25 foot upward flex in testing.

3. The 787 was grounded for serious problems early in its history

Shortly after the dreamliner had passed inspection and become certified for commercial use, several serious issues were identified. In fact, they were of such gravity, that the airliner was grounded for a period of time, until they were fixed. The lithium-ion batteries were causing fires on board, along with other battery related issues. They were remedied and the aircraft once again was approved for service.

4. The Boeing 787 has something in common with a B2 Bomber

It’s not the fact that they are both aircraft and fly in the sky. They share a similar active gust alleviation system. The system uses sensors that measure the degree of turbulence that occurs at the nose of the plane during flight. The sensors send information to the control system and adjustments are made to smooth out the rough patches so passengers have a much smoother ride.

5. The Dreamliner is the ‘greenest” jet in the Boeing fleet

The 787 was designed with fuel efficiency, trumping all other airlines manufactured by Boeing by 20%. In addition to this, it was made mostly of composite materials in the air frame, which signifies a more environmentally friendly approach to the manufacturing process. These two factors make the Boeing 787 the most eco-friendly aircraft that Boeing has ever made.

6. There are more than 2 million components in the Boeing 787

The Dreamliner is a massive aircraft and it really comes as no surprise that it is made up of about 2.3 million different parts. This is mind boggling, when you compare it to thee Boeing 737 that was created with a mere 400 thousand different components.

7. The 787 was originally designed under a different name

When the Dreamliner was in its developmental stages, it was originally set to be called the 7E7. This was because of its green design and the intention to make it a highly efficient craft with regard to fuel consumption. There are two theories that attempt to explain why the name was changed. The first speculation is because inserting the 8 into the name is a number that suggests good luck in China, and Chinese Airline companies were in line to purchase high numbers of the craft. The second suggestion is that it would break with the established tradition of Boeing in the progression of the lines.

8. The Dreamliner is an MEA

An MEA aircraft is defined as one that is more electric with regard to its power sources. Electric power for the operation of the 787 is stored in the Lithium-Ion batteries when produced from the engine generators. The majority of the power to operate the various systems of the jet come from this source and by design, the Dreamliner requires an estimated 35% less power to perform at the same levels of conventional aircraft.

9. State of the Art technology provides the height of customer comfort

When the 787 firsts rolled off production lines and began its career in the commercial market, it was a highly desirable craft because it maximized passenger comfort with the use of new technology and innovative uses of the knowledge including the smooth ride technology employing sensors to detect turbulence, much larger windows with electrified gel that automatically dims windows with the push of a button, eliminating the need for shades, and state of the art cabin lighting for achieving the optimum level of illumination.

10. The Dreamliner was made with multiple subcontractors from all over the world

The Boeing aircraft manufacturer didn’t make the 787 alone. The company employed the use of hundreds of design engineers and ordered components and sub-components from contractors in several different countries. Japanese contractors assisted in more than a third of the aircraft.