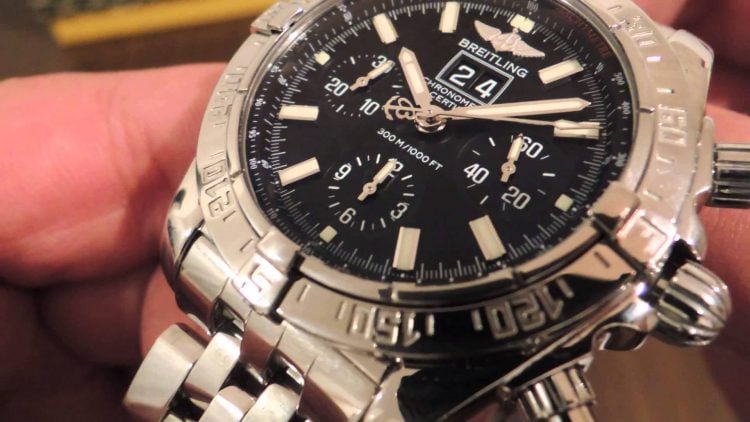 Coming from the well acclaimed Breitling repertoire of Chronomats, the Blackbird is a neat mechanical timepiece with a cool name. The watch is distinguished by the exceptional legibility of its dial and with an even better water resistance of three hundred meters that enable it to be used during underwater exploration. Another fact about this watch by the Swiss Company is that it is possible to select from three different finishes for its steel case. The range of choice is even further extended with the unprecedented addition of two limited editions with different dials.

As it has always been mentioned, this timepiece prides itself on the legibility that is realized with the use of large hands and sizeable hour markers that have been well treated with luminous coating. Additionally, the effortless legibility is exhibited in its date indicator that is placed at the top of the watch’s dial. The date indicator is oversized in accordance to the theme, and it includes two separate windows with one showing the tens and the other one displaying the units. Regardless of its name, not all models of the watch are made of black dials since it is also possible to purchase one in blue. However, even the ones that have blue colored dials have the design with some black sub-dials – the watchmaker calls them black eye blue dials. Two very limited editions of Breitling Blackbird, named Black steel and Red Strike, are made of black dials that have been decorated with red accents. Both models have a tachymetric scale.

The Blackbird by Breitling

The Breitling Blackbird offers exceptional robustness, practical functionality: all wrapped in a modern design. Its most characteristic feature is the black watch dial that improves on the enchantment offered by the original Chronomat timepieces. Named after the reconnaissance aircraft SR-71 Blackbird, the watch was developed, initially, as a pilot accessory. However, it has grown to find numerous supporters among watch enthusiasts outside the aviation field. The Blackbird showcases a stealth profile and it is, therefore, reminiscent of the aircraft. Despite this simplicity, the Blackbird easily exhibits the best qualities applied in all Breitling watches. The features distinctively appear throughout all generations of this watch since its launch in 1995 – both second hand and new models of the watch are pleasing to the eye.

Breitling, the Swiss watchmaker, first presented the Blackbird in 1995. Both the reference and design numbers of this first edition timepiece show that the Blackbird is placed under the Chronomat line and it is, therefore, a member of the Breitling Windrider family. The relationship between the Chronomat series and the Windrider models is also showcased in the bezel and the black watch dial. So as to emphasize more on the remarkable status of the first edition watch, the Windrider dial is transcribed with some red writing: “Serie Special” and the phrase Breitling Blackbird at three o’clock. From the beginning, the manufacturer made the Blackbird with functionality in mind – thus the design is kept simple but highly functional.

The Blackbird was named after the military spy plane: the Lockheed SR-71 Blackbird. The plane was used by the American aircraft from 1966 and 1998 – currently, due to modern technological advancements, the plane can only be viewed in museums. The spirit that inspired the SR-71 aircraft is embodied in all watches included in the Blackbird series. The production of this aircraft was revolutionary, especially because it was the first plane to include so many tools and methods for its development. While moving at its highest speed, the change of geometry and the heating of metal were quite significant that the plane would leak fuel through the cracks in between the parts. The whole idea of the aircraft was to fly very fast and at high heights that it was not possible to hit the aircraft by missiles. Additionally, since most Russian planes could not reach such heights and move at such speeds, the aircraft was ideal for war reconnaissance missions. The plane was well designed to ensure minimal radar reflection and it was painted in matt color for even better invisibility on the sky and improved heat dissipation. She was, therefore, named the Blackbird. Unlike the U-2, no Blackbird has ever been shot down and some of the speed records she set are still unbeaten to date.

The Pleasure of Choice is yours

The purchaser can decide to choose between a black Diamond Carbon and a satin polished finish that has been achieved through Physical Vapor Deposition. This treatment offers improved smoothness, hardness and resistance, and it is only available for the limited edition named Black Steel. There are only two thousand pieces available under this series just as in the other edition – the Red Strike.

The watch is made of circular shaped cases that have average diameters of 43.7 mm and an average thickness of about 17.2 mm. The Breitling Blackbird watch is designed with a screwed in case back and it has a crown that is locked with two gaskets; these features are expected for a diver’s watch that can be immersed into great depths. Its bezel, which has a 360-degree scale on it, can rotate in both directions. Moreover, its sapphire crystal has anti-reflective treatment on either side.

Inside its housing, the watch has a self-winding movement with the designation B 44. The mechanical movement mechanism is made of 38 jewels and has a frequency of about 29,000 vibrations per hour and can store power for more than forty hours. The timepiece is a C.O.S.C certified Breitling Chronometer that has a quarter of a second chronometer. Available bracelets include the Pilot Bracelet – which is made of stainless steel – two different types of leather straps – crocodile and regular – in differing colors and two kinds of rubber bands – Diver Pro II and Ocean Racer with perforations. The rubber bands are also made in varying colors to please a wide range of consumer preferences.