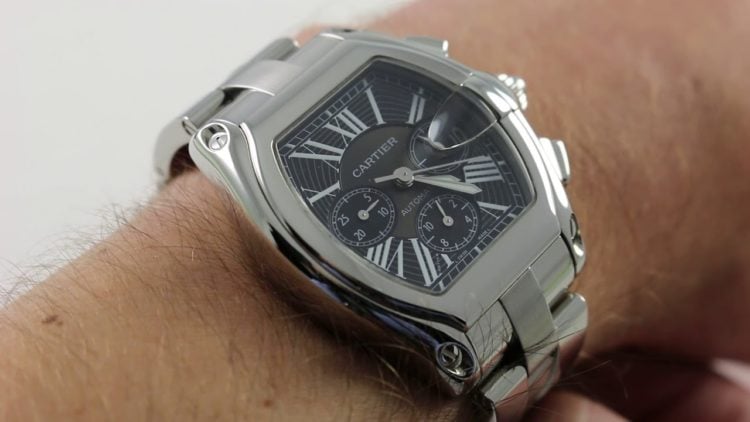 Cartier has been in business for over 175 years. In that time, it’s become synonymous with luxury and quality. A favorite with royalty, the brand’s watches and jewelry are some of the most coveted in the world. The Cartier Roadster Chronograph is an example of what’s made the brand such a global phenomenon. It’s a watch that’s looked beyond the world of horology to the world of the motorcar – or more specifically, to the automotive industry of the 40s and 50s. Its sleek lines and metallic curves doff a hat to the great motor cars of the era, echoing the passion and excitement of the motor racing world while building on the legacy of that other great masterpiece, the 1912 Cartier Tortue. The Roadster debuted in 2001. To the bitter disappointment of fans, it was withdrawn just 10 years later. But despite its short life span, it managed to earn a place among the brand’s most legendary creations. Its sleek, sporty aesthetic and outstanding functionality made it the quintessential Cartier sports watch. Almost ten years since its demise, it’s still drawing huge interest in the pre-owned watch market. If you’re keen to add some first-class appeal to your watch collection, here’s everything you need to know about the Cartier Roadster Chronograph.

The History of the Cartier Roadster Chronograph

The Cartier Roadster Chronograph may have debuted as recently as 2001, but it’s a watch that’s rooted in history. As Crown and Caliber writes, the Roadster pays homage to the golden age of the sports car. With its voluptuous curves and sleek lines, the tribute is clear to see. Traditionally, Cartier has relied on square and rectangular silhouettes. In that regard, the elegant, soft tonneau-shape of the Roadster sets it apart from the competition. The motor car inspiration continues in the four distinctive screws placed on each corner of the case: looked at with an understanding of the watch’s creative backstory, the resemblance to a car’s headlights is uncanny. The first few models released in the line drew heavily on the Porsche 356. The alternating white and red numerals, the concentric circular pattern, the baton hands, and the inboard minute hashes were all heavily reminiscent of the speedometer of that iconic car. In later editions, the references to the 356 became more oblique, but the collection never completely abandoned the theme, as evidenced by the magnifying mirror placed above the date window and the unique design of the dial.

While it was the Roadster’s unique aesthetic that drew the most attention on its initial release, customers soon found its function to be just as noteworthy as its design. Most models in the range boasted an epic 42-hour power reserve, along with an equally significant 100 meters of water resistance. Thanks to the addition of a stop-seconds mechanism, the wearer could easily synchronize the watch to a time signal with to-the-second precision.

Over the course of ten years, Cartier released several different versions of the Roadster. In addition to the Chronograph, there was also the oversized Roadster XL, the Roadster GMT, and the entry-level Roadster S. While all the models had their attractions, it was the functionality of the Chronograph that proved the most popular then, and which continues to generate the most interest on the pre-owned watch market.

Why Should You Buy a Cartier Roadster Chronograph?

It may have been kicked out of the Cartier catalog a decade ago, but the Roadster is still pulling in customers on the pre-owned watch market. Why? Simply put, it’s a great watch. Even leaving aside the intriguing motorcar references, the Roadster is a highly stylish, superbly function timepiece that’s very deserving of a place in even the best collection. Ultimately, all Cartier pieces are highly desirable. After all, this is a brand that’s been worn by everyone from Great Garbo to Princess Diana and Jaqueline Kenndy Onassis. Classic, timeless, and with a rare ability to marry functionally with looks, a Cartier is an investment piece that will last you a lifetime. Thanks to its iconic style and unique heritage, the Roadster is about as covetable as a Cartier can get. For those in the market for a luxury watch with a difference, it’s a no brainer.

Where To Buy A Cartier Roadster Chronograph

While the Cartier Roadster Chronograph may not be available via the official Cartier site these days, finding one isn’t too much of a challenge. The pre-owned market is vast: providing you go into it with some understanding of what red flags to watch out for, you should come away from the process with a great watch at a great price. The Real Real (5 Expert Tips For Buying A Cartier Watch) offers some great tips for buying a pre-owned Cartier. Regardless of where you source the watch from, be sure to bear the following in mind:

Like many prestigious brands, Cartier has become a popular target for fraudsters. Some fakes are obvious; others are good enough to almost pass for the real thing. Be careful to check the watch thoroughly. A genuine Cartier Roadster is a masterpiece of design and exhibits faultless attention to detail: if you notice any flaw, no matter how minor, take it as a red flag. While you’re checking the watch for flaws, check the stamping as well. The case of the Roadster should be stamped with the material its constructed from, a serial number, a four-digit model number, and the Cartier signature. Search the displayed model number online to ensure it matches up to the model and model year you were expecting. However, don’t take this as a guaranteed sign of authenticity in itself- it’s easy enough for scammers to replicate existing model numbers on their fakes.

If you’re buying online, always ask for high-definition photos of the watch. Once you receive them, carefully compare them to stock images of the Roadster online. If you notice any discrepancies, be very careful about your next step.

As Ermitage Chronicles notes, cheap isn’t always good, especially when you’re dealing with luxury brands. Ultimately, Cartier watches aren’t cheap: if you find one that is, there’s a good chance it’s not genuine. No matter how tempting it is, beware of the Cartier watch that’s advertised for a few hundred dollars. Even a Roadster in less than perfect condition is still going to set you back a few thousand.