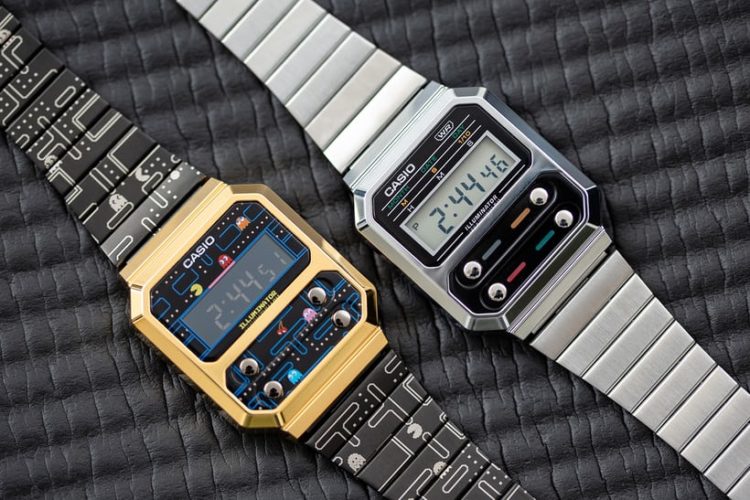 Casio is being a good sport by taking a break from its innovative new G Shocks to provide lifelong loyalists to the brand with a nostalgic trip backward in time. Those of us who have followed Casio are in for a real treat with its latest release of the Vintage X Pac-Man A100WEPC-1B special edition. It pays tribute to one of the most popular video games of the 1980s and ’90s era. It’s a timepiece that fuels memories of childhood when the most important thing to do after school was to beat your brother to the controller to get the first turn. If we’ve got your attention, it’s time to turn to the finer details of Casio’s Vintage Pac-Man watch, in an update about what we know so far.

A new collectible in the making

The new Pac-Man is a re-issue of Casio’s Pac-Man edition watch that made its debut in 1978, according to Pocket Lint. The official announcement of the reissue of Casio’s Pac-Man watch was made in July of 2021. The original was a first for Casio with its quartz movement and a new full resin case. The first release of Casio’s Pac-Man was a variant of the model called the F-100. It featured the characters of the famed Namco game. The latest version has been renamed the A100. The Pac-Man variant will be one of several versions offered in a choice of metals for the others. Casio is once again collaborating with Namco in this celebratory timepiece that puts a modern twist on the original release from over 40 years ago. We could be witnessing a new collectible in the making.

What we know about the new Casio Pac-Man

Casio International confirms that the latest edition of the Pac-Man will be based on the new A100 series timepiece that is a reprise of the original F-100 in a modern format. You can expect to see a four-button layout in the front with a vintage aesthetic with the original Pac-Man characters as they appeared when the game was first released. The design of the face highlights the pixelated characters of PAC-Man and ghost in their original colors. The PAC-Man font is used for the center illuminator logo in a layout that is a replication of the old game screen. It even includes the pink line marks exiting the nest where the ghosts come out to play.

Hodinkee walks us through the details and specifications. The case features gold-plating that is reminiscent of the arcade game cabinet. It measures 32mm in width and is made of resin with a metallic overlay to give it a yellow gold appearance. The depth of the case is 9 mm for a moderately slim profile. The case back is made of stainless steel and features Pac-Man and the four ghosts to point to the functions of the buttons. The watch measures 40 mm lug to lug.

Functions of the Pac-Man

The top-left button is the Reset in white and grey. The second button is yellow and controls the backlight. The third is the start button in green and Mode is presented in red. It’s color-coded to make the operation of the watch’s functions simple once you get the hang of it. It’s a highly functional watch for its low price. You get time, an alarm, a setting menu a chronograph, and a mode button that takes you through all of the features, including a screen that indicates AM/PM, hourly chimes, and an active alarm. The time and other information are displayed with a yellow/orange glow and it also offers a calendar display with month, date, and day.

Other notable features of the Casio Pac-Man watch

The bracelet is made of metal with laser etching at the top of the band featuring Pac-Man running from the ghosts. The bracelet is secured with a sliding hook and bar-style buckle. The bottom of the band features Pac-man chasing the ghosts. The total weight of this watch is just 53 grams for a light and comfortable fit. The special edition Pac-Man watch will come with a themed box and a display case made of clear plastic that bears the dual branding of Casio and Pac-Man. It will make a lovely gift for the Pac-Man enthusiast in your life.

Casio has set the pricing for the A-100 watch range starting at $54.95 for the steel version with a cost of $74.95 for the dark tone and gold versions. The Pac-Man variant is set to sell for an MSRP of $99.95. Understandably, the cost goes up to nearly double with the extra graphics and details added to the new digital version of the Pac-man watch. Casio has not yet indicated when the new Pac-Man vintage watch will be available, but we’re assuming that with hype building it will be in the weeks or months to come.

Fans of the old vintage Pac-Man game have something cool to look forward to. A re-issue of the Pac-Man collaborative edition from the 1970s is offered in a new modern styling that offers all the visuals from the original video game in a compact 32 mm wristwatch. The vibrant colors and recreation of the characters don’t miss a beat. They’ve even replicated the appearance down to the color and the font styles. This will be a moderately priced Casio that has a good range of functions including a backlight. It’s likely to appeal to gamers who still remember the good old days when playing Pac-Man was one of the most important things you could do. Although Casio has not indicated the release date, we’re reasonably sure that the drop of this new watch will make it in time for the 2021 holiday season. Until we hear more, keep your eyes open and your ear to the ground.