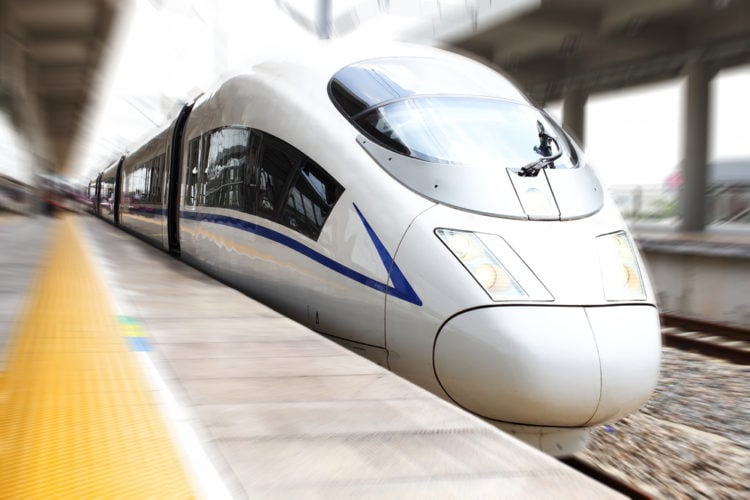 Imagine what it would feel like to board a train and be able to travel almost eight hundred miles in just over two hours. If you’re on China’s new bullet train, you don’t have to imagine what this would feel like because you can actually go and experience it for yourself. That’s right, the new train that they debuted less than ten days ago is capable of traveling between Beijing and Shanghai in approximately two and a half hours. When you consider the fact that that is just over 750 miles in distance, the very idea of this train existing takes on a whole new level of importance.

If you’re wondering how any train can possibly travel so fast, you certainly aren’t alone. It’s important to note something here. This is not merely the fastest train, but the fastest vehicle of any type that is capable of traveling on land. The question is, how did they do it? As it turns out, it’s all done with a newer type of technology that involves using an electric magnet that actually lifts the train up off of the tracks. It only comes up by about two inches, but that’s enough to get the job done. The end result is a train that is capable of traveling faster than you could possibly imagine, largely because it isn’t actually touching anything. The electric magnets keep it from making physical contact with the train tracks, yet they are strong enough to hold the train in place so that it doesn’t inadvertently veer off course. The end result is something that appears to be traveling on land but is technically hovering over it, traveling unencumbered by the friction that would otherwise slow it down.

Years in the Making

This is something that China has been working on for years. They studied the science for quite some time before ever developing a prototype, which finally debuted in 2019. This time around, they have debuted the train that will actually be put into service, allowing people to travel at speeds that have never before been achieved. In fact, for anyone who is willing to do the math, it comes down to the train traveling at roughly 373 miles per hour. If you want to put that into further perspective, the same trip that this train is capable of making in two and a half hours would take a little over three hours to make in a commercial airliner. If you prefer driving, get ready for a long trip because it would take roughly 12 hours to make that distance.

Of course, anyone that even thinks about getting on a train that is capable of traveling close to 400 miles per hour is going to think about its safety record. This train hasn’t been in operation long enough to have a safety record, but the science behind it is solid. As previously mentioned, the country has been testing the prototype for this train for roughly the last two years. It might sound scary to think about traveling on a train that isn’t actually touching the tracks, but it’s important to remember that the electric magnets used to hold the train just above the tracks are some of the most powerful and reliable magnets on Earth. Everything is monitored with a state-of-the-art computer system, allowing operators to see where the train is in real time. Truth be told, this type of design is actually much safer than the traditional trains that are making physical contact with the tracks. Those types of designs are reliant on clear tracks that are completely undamaged. Any type of physical damage or any debris on the tracks themselves can potentially cause the trains to derail. When the train is traveling over the tracks, some of these issues are effectively reduced. In fact, a number of magnets would have to lose contact before catastrophe would occur.

This train is capable of changing the way that people travel, not to mention the way they live their lives. Imagine being in business and being able to travel from one location to the next in a matter of hours as opposed to taking an entire day to conduct the same business deal. It could potentially be the difference between sealing that deal or allowing someone else to get the jump on you. In addition, it opens up new opportunities for people who want to travel there to see family and friends or to simply enjoy a special outing. Traveling by train is cheaper than traveling by aircraft, so it’s more economical for people that need to travel. By the same token, it now takes less time to travel using the bullet train than it does to get on an airplane so it effectively eliminates the need to worry about air travel and all of the potential hassles that go with it these days.

For anyone that is still apprehensive about getting on China’s new bullet train, those concerns are likely to dissipate over time. In fact, the level of interest in using this train is already overwhelming. It has been ever since news of the first prototype was announced. It truly is something that possesses an ability to change the way that people live their lives. The freedom that comes with being able to travel over vast distances in a very short amount of time is something that can’t be matched. Being able to travel that distance in comfort only increases the chances that more and more people will choose to use this form of transportation as opposed to other slower, more cumbersome options. That is precisely why so many people will likely make the decision to use China’s new bullet train in the future.