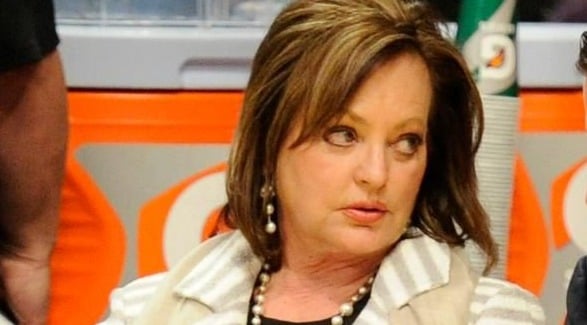 We used to hear of the expression “to be born with a silver spoon in one’s mouth” and thought it only occurs in fairy tales and movies, but Ann Walton Kroenke is among the lucky few to whom the expression applies.  However, that doesn’t mean Ann hasn’t spent years giving back and becoming an amazing part of society. Apart from being born into a wealthy family, let’s learn a few more interesting facts about the current Denver Nuggets owner.

1. She and her husband spent over $33 million to buy a house

While some of us are struggling to pay rent, Ann and her husband, spent $33,142,500 to buy a house from the Beckhams and, it was an all-cash deal. The house, built by Kent Kresa and designed by Tim Morrison measures 11,500 square foot and comprises six fireplaces, nine bathrooms, six bedrooms, a swimming pool, mature canary palms, and a courtyard. It is in Beverly Hills in a private lot and the iron gates, and long driveway makes it impossible to see it from the street. Perhaps that is the cost of privacy in Beverly Hills.

With a wealth estimated to be $6.9 billion, Ann made it to the Billionaires list in 2019 coming in at number 244. In 2018, she was also on Forbes 400 at number 83. Most of her wealth is from her inherited stock in Walmart shares since her father, Bud Walton, died in 1995. Bud Walton was a brother to Walmart’s founder Sam Walton and the store as of August 2018 was worth $386 billion, based on the three-year average profits and revenues.

3. She has been married to Stan Kroenke for 45 years

We have heard of marriages that lasted a few days and months and some even hours such as Britney Spears and Jason Alexander whose marriage lasted for 55 hours. However, some matches are made in heaven; Ann and Stan’s must be among those heavenly unions seeing that they have remained together since 1974. Further, while others believe that dating for an extended period guarantees a lasting union, Stan and Ann courted for two years after meeting during a skiing trip in Colorado, in 1971.

Stan is a multi-billionaire who has his hand in various ventures despite having had his first job sweeping floors at the lumber yard his father owned. He is the founder of Kroenke Group, a real estate development company; he owns working ranches totaling to 848,631 acres as well as other sports investments such as Colorado Rapids and Colorado Mammoth. Despite having his money in so many undertakings, he has come to be known as “Silent Stan” due to his reluctance to give press interviews as well as for remaining out of the day-to-day operations of his businesses.

You would think that a person with such wealth would want to have many kids since raising them is not a problem. Ann has two children only, Josh and Whitney. Josh, who went to Rock Bridge High School and furthered his studies in the University of Missouri, is the President of the Denver Nuggets and runs his father’s Colorado Sports ventures. Whitney, on the other hand, went to Northwestern University, and she is not only a singer, choreographer, and actress but also she co-founded Playing for Change Movement where she is also the Executive Director.

We all take pride in owning something regardless of how much you spend on it. Imagine owning the superyacht Aquila, the largest private luxury yacht made in the United States since the 1930s. Well, Ann, together with her husband own it, the yacht built by Derektor Shipyards, designed by Tim Heywood and Dalton Designs on the exterior and interior respectively can accommodate 14 guests. It was put up for sale in 2011, and the Walton family bought it in December 2014 for $150 million. Of course to match to the couple’s taste the yacht had to be refitted in the largest refit project ever to date.

7. Her husband was the previous owner of Denver Nuggets

Stan Kroenke became the full owner of Denver Nuggets in 2000, and in 2010, he also became the full owner of the Rams after gaining unanimous consent from the National Football League. However, for him to have the NFL approval, Stan had to turn over control of the Colorado Avalanche and Denver Nuggets to Josh by the time 2010 ended. Moreover, since the NFL does not permit its owners to have majority control of major league teams in NFL markets, Stan had to forfeit his majority stake in both teams therefore on October 7, 2015, the transfer of ownership of both teams to Ann gained approval by the NFL.

8. Ann is committed to supporting politics

9. Ann gives back to her community

Ann exercises her philanthropic efforts through Audrey J Walton & Ann Walton Kroenke foundation, which is a grant-making foundation headquartered in New York and established in 1995. The foundation supports other charities by contributing money and also aids education institutions within the state by offering funds. Ann also had another charitable organization called Denver Nuggets Community Fund, but it was shut down.

10. Ann is a registered nurse

Ann may be a compassionate person who not only gives back to her community through her charitable organization but it seems like she also wanted to help the sick by becoming a registered nurse.