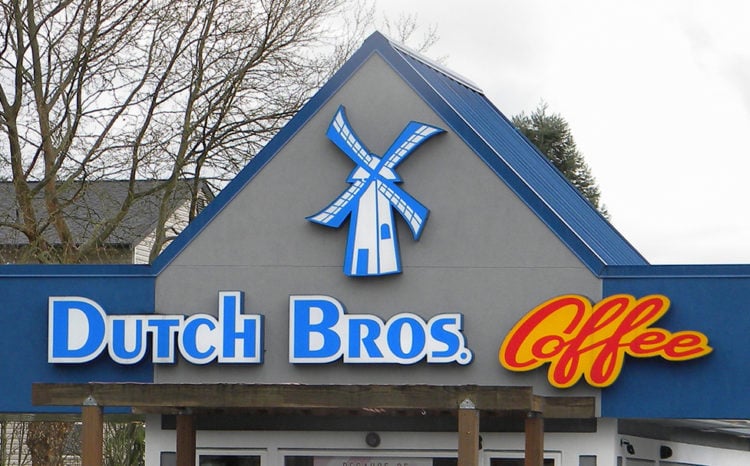 For any company, the logo is a key element of the brand image. Businesses are careful when creating a logo design, as it reflects their company and the image they wish to present. Everything from the color scheme to the choice of font and the image design is given careful consideration. These considerations are evident in the design of the Dutch Bros company logo, as it clearly shows the company’s name and gives a clear impression of the business. Here is the history of and the story behind the Dutch Bros logo.

An Overview of Dutch Bros

Dutch Bros. Coffee is a coffee chain that was founded in 1992. It is the United States’ largest privately held drive-through coffee chain. Although the company has its headquarters in Grants Pass, Oregon, there are franchises and company-owned locations throughout the western United States. Brothers Dane and Travis Boersma founded the company together in 1992. Before launching their coffee business, they were both working on the family dairy farm. They decided to sell coffee around their local town using pushcarts to get around with their wares and chose the name for their business based on their Dutch heritage.

The brothers opened their first coffee shop locally, and the company has since expanded significantly. There are now 379 Dutch Bros locations in the western United States across seven states. Although most of the coffee shops are drive-throughs, there are also some walk-in locations. Initially, the company only sold coffees. However, alongside the various coffee options, the menu now offers various other caffeinated beverages, tea, hot cocoa, sodas, energy drinks, and lemonade.

Sadly, Dane Boersma, one of the founders, died of Lou Gehrig’s disease in 2009. In his memory, Dutch Bros holds an annual fundraiser called ‘Drink One for Dane’ to raise money for the Muscular Dystrophy Association. The company website says they also support local communities and donate money to a variety of non-profit organizations.

A Description of the Main Dutch Bros Logo

Unlike many companies that use just one logo, Dutch Bros Coffee uses multiple logos. However, the main logo is the one that appears on the front of their stores, and it is the one that the company has used since the beginning. So, let’s take a look at that logo first. The main Dutch Bros logo has the words’ Dutch Bros’ written in blue uppercase letters, with the initial letters in a larger font and the first vertical line of the ‘H’ taller than the other letters. Below the lettering are three horizontal lines. From top to bottom, these are yellow, red, and blue. The lines stretch from the beginning of the letter ‘D’ to the space between the ‘R’ and the ‘O’. At the end of the lines is the word ‘Coffee’ written in lower case, except for the capital ‘C.’ The lettering is red outlined in yellow, with the word written on an angle.

The image above the lettering is a blue windmill, as windmills are an important part of Dutch history and culture, so it is the ideal representation of the company name. In the image, the four sails are angled to create an ‘X’ shape. The windmill is a solid blue image in the main logo, although there is more detail to the windmill in variations of the main logo. The image and lettering appear against either a white or pale blue background.

Variations of the Dutch Bros Logo

There are multiple variations of the main logo that the company uses in a variety of ways. One variation is the same general design, but with the windmill and the words’ DUTCH BROS’ in white, with the logo set against a dark blue background. Another variation of the primary logo is the blue windmill symbol above the blue wording ‘DUTCH BROS,’ but with the yellow and red word ‘Coffee’ appearing alongside the name rather than below, and no horizontal line. In a simplified version of the logo, the word ‘Coffee’ and the horizontal lines are omitted. The simpler logo simply has the words’ DUTCH BROS’ written in blue below the solid blue windmill design.

There are also more elaborate variations of the design that have appeared on the disposable coffee cups. According to Logo Lynx, the windmill in this logo design is more detailed, rather than the simple block color design in the main logo. It is a blue and white image, with the details of the sails included. The windmill roof is a pale blue, which is also the color used for one vertical stripe on the main body of the window and the door. A darker blue is used to highlight the ‘X’ shape of the windmill sails, for a vertical stripe on the main body of the windmill, and for an arched window on the pale blue stripe.

The words’ DUTCH BROS’ are written over two lines, with the letter ‘D’ landing between the upper two sails of the windmill and the word ‘BROS’ written next to the upper right sail. The lettering is in black outlined with yellow. Below this is the word ‘Coffee’ written in red and outlined with yellow. Below the lettering and to the lower right of the windmill’s body is a tulip design that does not appear in other logos. There are both red and yellow tulips in the design, all of which have green stems and leaves. The tulips alternate in color and the red flowers are taller than the yellow tulips. Like the windmill, the tulips are a symbol associated with the Netherlands and Dutch culture.

A similar variation of this design is also shown on the company’s coffee cups. While the lettering and tulip design remain the same, the windmill is only in white and dark blue, with no pale blue sections. It means that the design is slightly simpler, as it loses details such as the window on the windmill’s body.