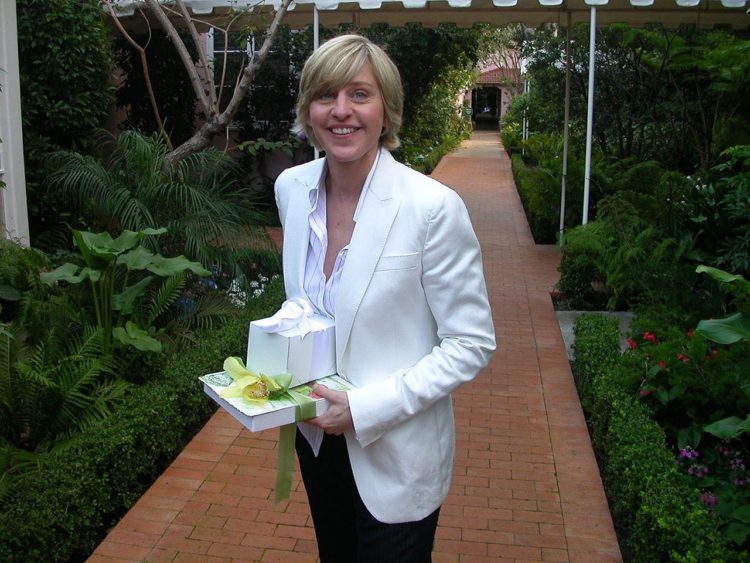 Ellen DeGeneres is one of the most likable and most relatable celebrities in America and in the world. With her casual everyday material, friendly disposition and every woman attitude, Ellen DeGeneres has seemingly seamlessly created an empire worth many many millions. Throughout her 40 year career as a comedian, actress, hostess, writer, social changer and philanthropist, Ellen DeGeneres is as relevant today as the day she began her career. Ellen has been honored with 30 Emmy Awards, 20 People’s Choice Awards, awards for her charitable awards, and, in 2016, the Presidential Medal of Freedom. Here’s how Ellen DeGeneres achieved a net worth of $360 million.

Ellen Degeneres was born in Metairie, Lousiana in 1958. Her family and friends knew she had a knack for comedy, and Ellen began her career as a stand up comic in 1978. Throughout the 1980’s, she maintained her status as one of the leading female comedians in America. As cable television began to showcase comedians, Ellen was named Showtime’s Funniest Person in America in 1984. Two years later, she was honored by the acknowledgement of Johnny Carson on The Tonight Show. Ellen DeGeneres was off to a great start at building up her net worth back then. After decades of television, movie, book and other appearances, Ellen was asked to create a stand up comedy special for Netflix which will be streamed in 2018. She is excited to go back to her comedic roots.

The 1990’s showcased several comedians in their own sitcoms. Ellen DeGeneres was the one female comedian among man men. Ellen’s television stint on the show “Ellen” was a huge hit. The show ran from 1994 to 1998. During the show’s fourth season, Ellen came out as a lesbian. She was the first lesbian actress to come out. She announced it on the Oprah Winfrey show, and the television series “Ellen” broke ground when the series had the character Ellen come out on the show. The show came back as “The Ellen Show” which ran from 2001 to 2002 and explored the popular character and her friends acknowledging the issues of coming out as a lesbian with a light comedic touch. In 2003 Ellen DeGeneres debuted “The Ellen DeGeneres Show. The talk show has consistently received high ratings and remains a syndicated staple today. In 2015 the show won the Daytime Emmy for Outstanding Talk Show. The show is a major contributor to the comedic genius’ net worth. Ellen celebrated her 60th birthday on January 26th of this year. She brought her loyal friends on to the show throughout the month including Oprah Winfrey, Jennifer Aniston, Kristen Bell and many others.

As Ellen’s talents as a great comedian were noticed, she was offered many film roles. She appeared in many films during the 1990’s including “Coneheads”, “Mr. Wrong”, “Edtv” and “The Love Letter”. In 1996 Ellen took on a primary role in Walt Disney World’s Epcot film series “Universe of Energy”. DeGeneres used her comic genius and relatability in the film series which was featured in an educational ride at Epcot called “Ellen’s Energy”. In 2003 Ellen DeGeneres won the hearts of generations for her voice performance as Dory in Pixar’s hit “Finding Nemo”. DeGeneres was the first actress to win the Saturn Award for a voice performance. She reprized her role as Dory in the hit 2016 animated movie “Finding Dory”.

In addition to Ellen DeGeneres’ work in stand up comedy, television and film, she has created multiple outlets. She has written four books. She founded a record company called Eleveneleven. She started her own production company, A Very Good Production. She launched a lifestyle brand called ED by Ellen that offers apparel, accessories, home products, baby products and pet products. In 2014 Ellen DeGeneres created Ellentube which provides exclusive content from her talk show. In 2017 DeGeneres launched a game show on NBC. The show features great interactive games made famous on her talk show. Ellen DeGeneres has also acquired income through her real estate endeavors and sales.

Ellen DeGeneres is certainly one of America’s most cherished stars. She is real. She is funny. She gives. Ellen DeGeneres’ talents have touched the lives of millions throughout her 40+ career. The comedian never disappoints. Ellen DeGeneres made her money through her talent and wise business decisions, but she also gives a lot to friends and is relentless in giving to her fans.