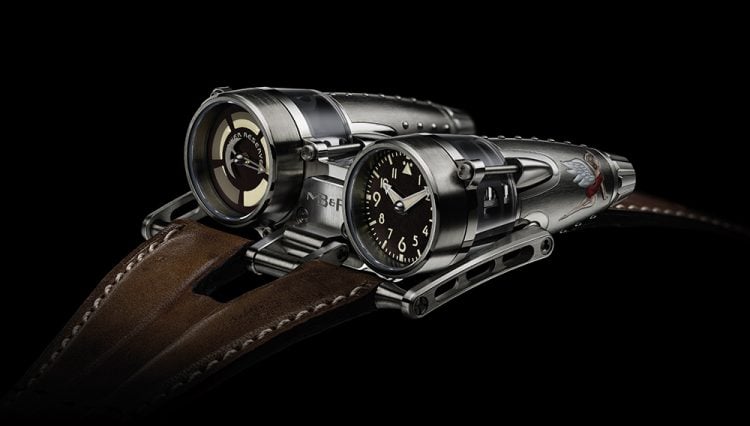 While some watch manufacturers produce practical timepieces that look attractive and work conventionally, others see watchmaking as an art form and dare to create timepieces that are far from the norm. MB&F is a brand that meets the definition of the latter, and it’s headed by designer Maximilian Busser.

Since the company opened in 2005, the watches that have come from its Geneva headquarters are not only pricey but exquisitely detailed and filled with mind-boggling components and complications. Most MB&F watches deviate so far from the traditional wristwatch that the brand calls them machines. Here are five of the most expensive MB&F watches ever created. 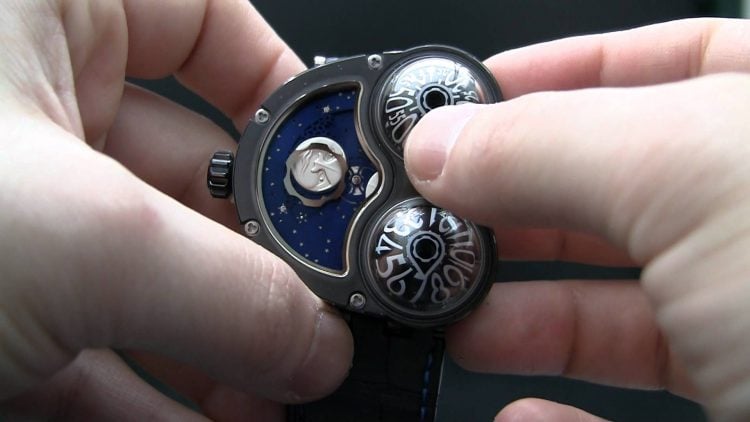 This artistic creation actually has moon faces on it — it’s the type of watch that’s not just an accessory or piece of jewelry but a gadget that you can’t help but look at. MB&F collaborated with watch designer Stepan Sarpaneva to come up with the collection, and its profile is based on another watch from the brand: the HM3, also known as The Frog. The Moonmachine’s Two hour and minute indicator domes definitely resemble the bulge of frog eyes, but the real showpiece of the watch is its spinning rotor that displays one of two moon faces depending on the time of year and date. 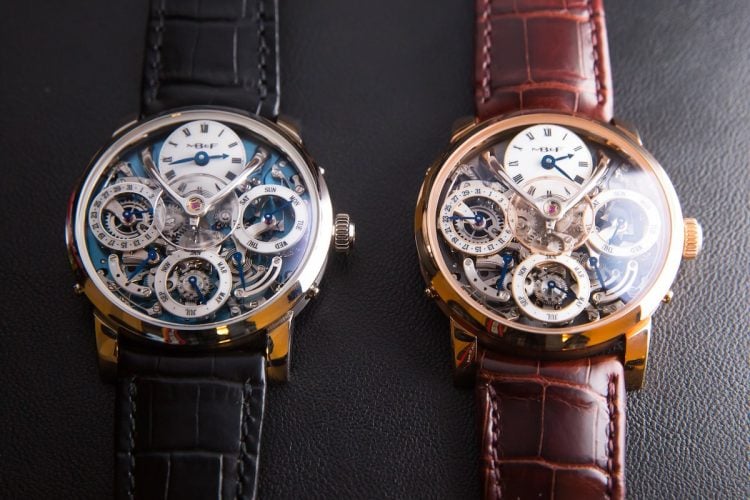 MB&F is no stranger to coming up with revolutionary concepts in watch design, but in 2015 when the brand unveiled the Legacy Machine Perpetual it introduced another game changer to the industry. Inside is a perpetual calendar, which in itself isn’t so unusual. However, the architecture of the function and the way its components are arranged is completely novel. Its mechanical processor and dial side complication were exclusively developed for MB&F by designer Stephen McDonnell.

There’s an impressive number of features and functions on this watch. In addition to displaying hours, minutes, and allowing for a retrograde leap year, the Legacy Machine Perpetual also displays the month, day, and date. As if that weren’t enough, the dial on this model has a power reserve indicator. 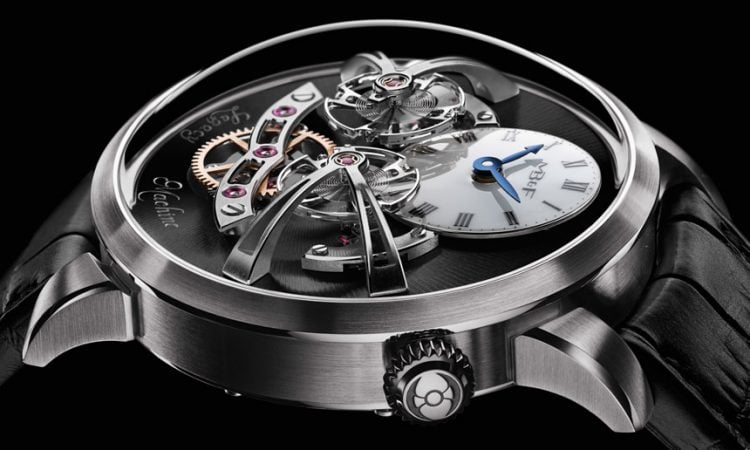 This limited edition watch is distinctive because of its blue dial, and just 18 pieces were made available for public sale. Other Legacy Machine No. 2 watches cost significantly less, but exclusivity comes with a price. This is one of many MB&F watches that has a custom made movement which can’t be found in any other timepiece. It contains two flying balance wheels suspended over its dial, which is a testament to the precise engineering that went into its creation.

Looking closely at the dial located at six o’clock will reveal a planetary differential that makes the watch a unique collector’s item. In addition to this function, the Platinum Legacy Machine No. 2 displays hours and minutes, though not at all in the way that most would expect. You don’t typically get to see a watch’s movement on display, but that’s exactly what this watch does. In addition, the movement contains 241 components, 44 jewels, and has a power reserve of 45 hours. 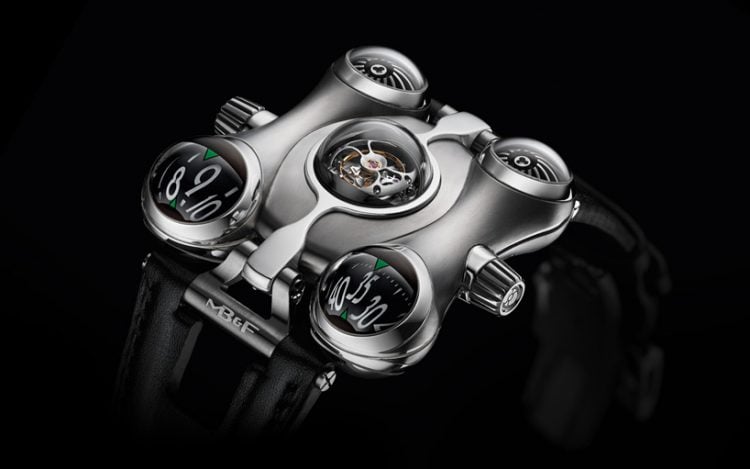 The name of this watch is intriguing enough and provides a clue as to how awesome it is once you truly get a look at all of its features. As far as appearance goes, the profile of this watch is similar to the most expensive watch in the HM6 line, the Sapphire Vision. However, unlike the latter this watch doesn’t have nearly as much of its inner workings put on display. You could certainly use it to tell time, as there are gauges that display the hours and minutes, but this is an art piece that one would wear to make a statement more than anything else.

Its bulges, smooth silver tone metal, and many gears and dials are futuristic and befitting of the watch’s moniker. Its sleek black leather strap is an appealing touch, and the satin finish on the case’s metal is modern and stylish. This MB&F watch sports a biomorphic case made of high grade titanium alloy, which means corrosion isn’t a worry when you own this timepiece. The fact that the shine on the watch took over 100 hours of hand polishing to achieve is likely what helped bump its price over $200,000. 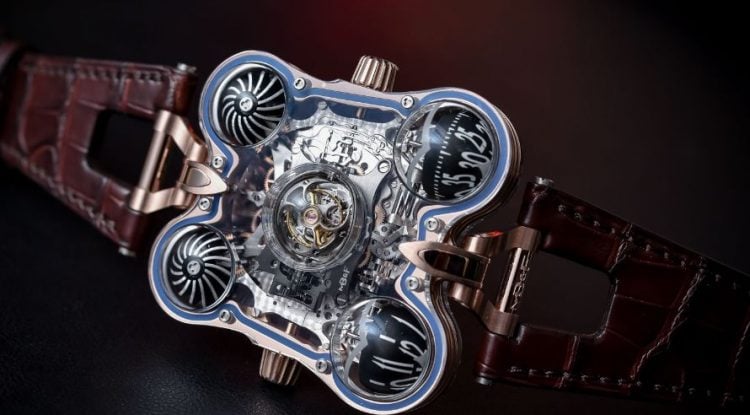 It’s not accurate to say that this MB&F watch has a face, although there are two dials that tell the time. Prominently positioned in the center of the timepiece is a collection of dazzling gears and components on full display, while in the bottom two corners are two windows that display the hour and minutes. This is the most expensive and rare MB&F watches launched to date, and it’s unique because it uses 11 separate pieces of sapphire crystal rather than one solid piece like watches made by other high end manufacturers.

A blue gasket ring encircling the watch adds bold color and makes its design stand out even more. The flying tourbillon, retractable cover, and biomorphic case are all features that are beyond avant-garde and reflect true innovation. At the 2015 Red Dot Awards, this particular model won MB&F a “Best of the Best” award due to the creativity of its design. Just ten of the HM6 Sapphire Vision in Platinum have been made available for sale, which is part of why it has such a high price tag. In addition to platinum, the HM6 watch is available in a red gold version that costs $368,000. This watch’s production was also limited to ten units. 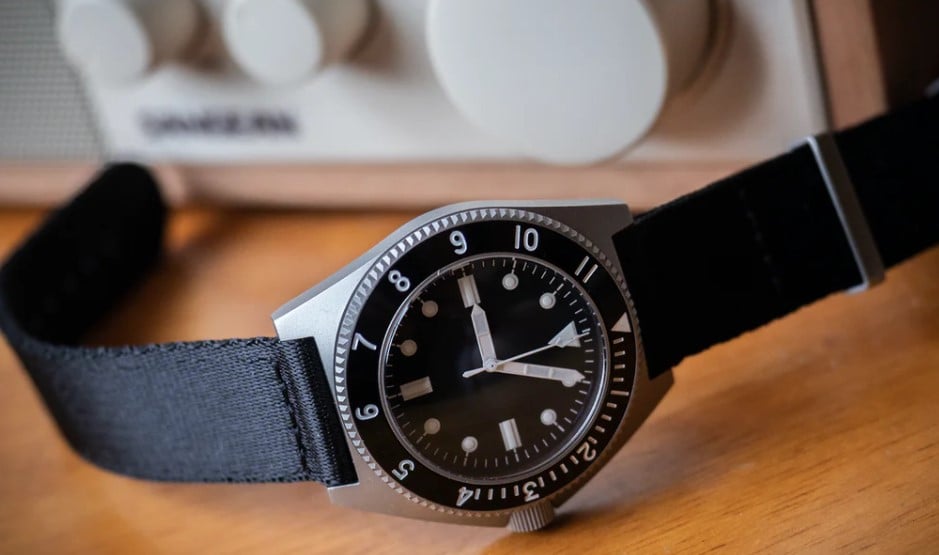 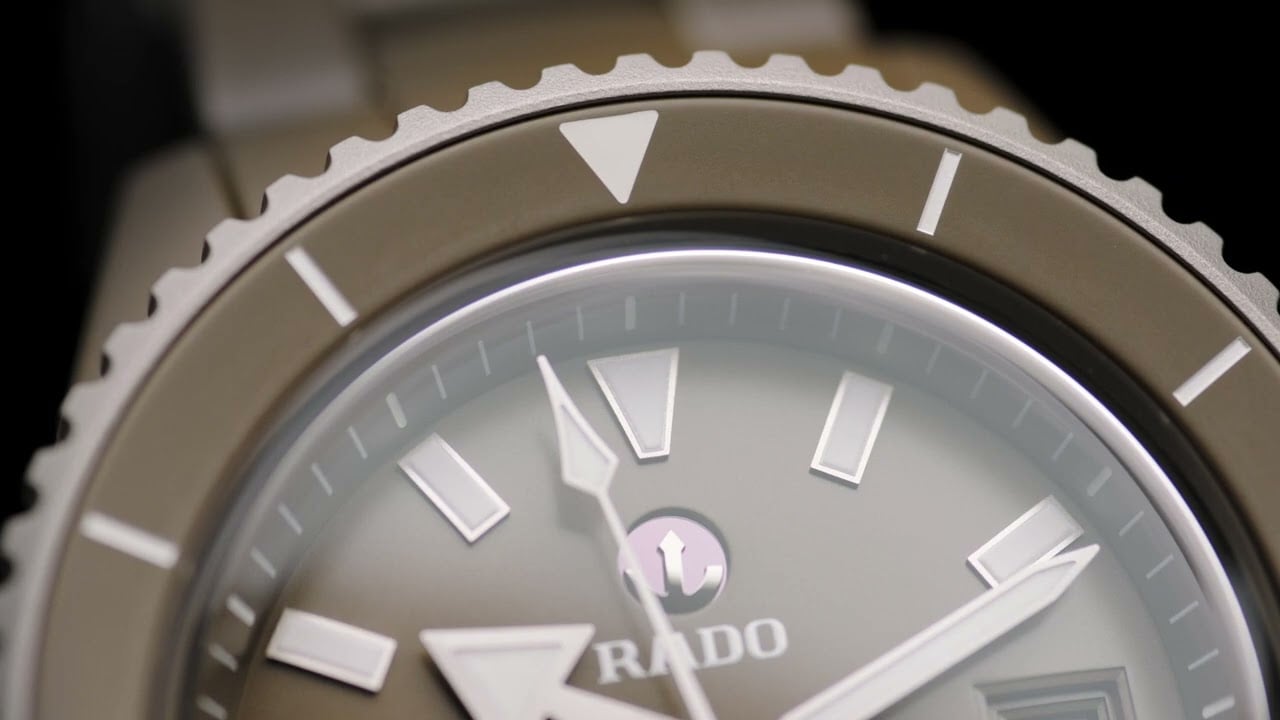 Rado watch manufacturers are no strangers to watch enthusiasts when it… 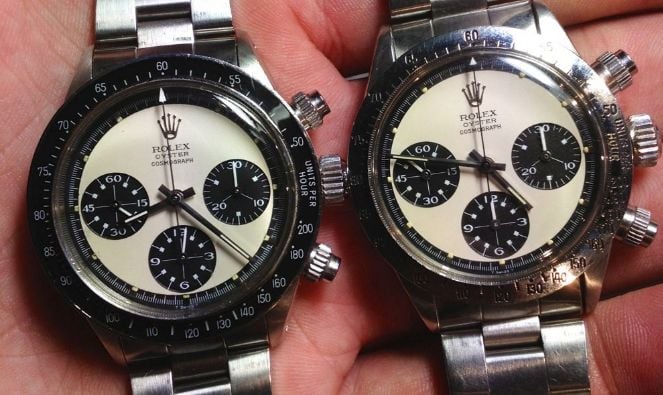 When it comes to the world of luxury watches, nothing can… 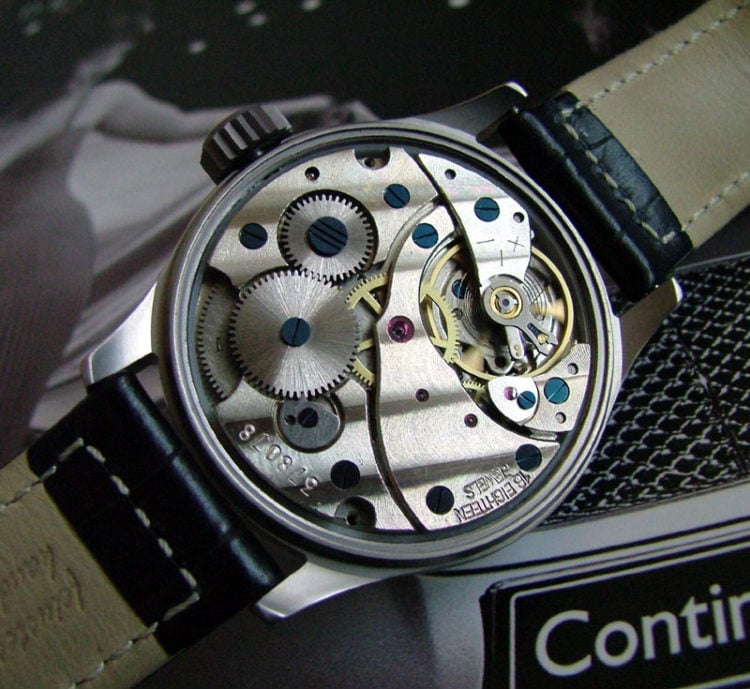 Mechanical watches are a practical miracle. Each features a myriad of… 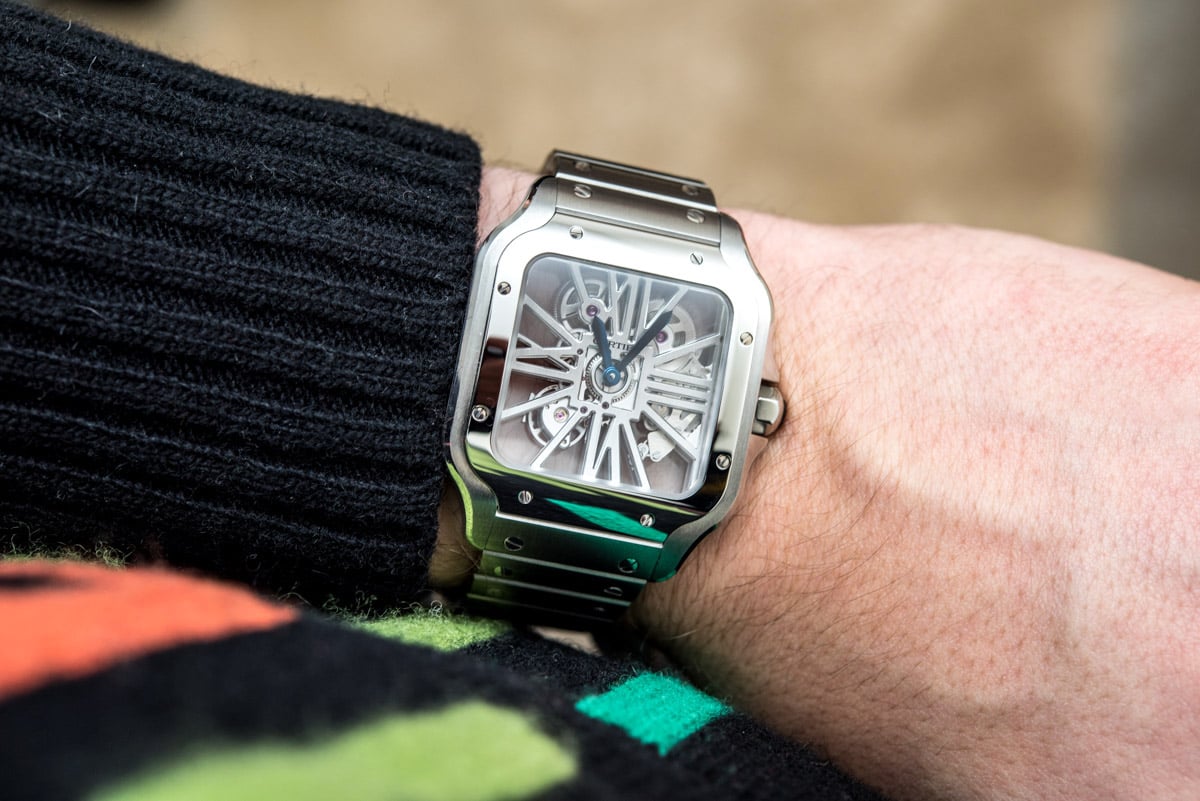 ﻿ Watches have always been a popular item. They give people… 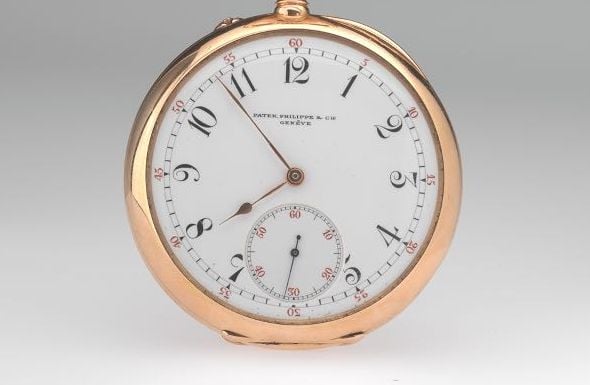