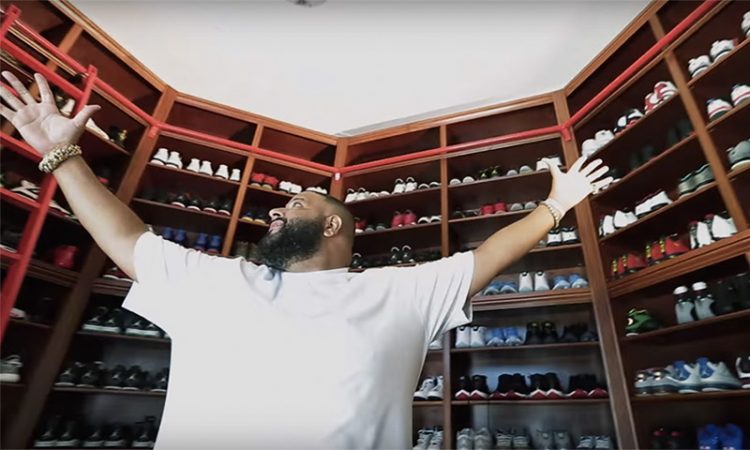 Everybody loves a comfortable pair of sneakers. The average person may own one or two pair, maybe three pairs of sneakers to interchange with for different outfits or different types of sports they play. But like we all know, the price of a good pair of sneakers, especially name brand or the latest shoe by a well-known sports icon, well, they’re going to be pricey, which typically means that the average person probably will not have a big sneaker collection.

Celebrities, on the other hand, are not the average person and when they like something, they tend to go all out and start a collection, whether it be art, cars, motorcycles, ,and yes, even sneakers. The following are five celebrities that have quite an impressive sneaker collection. Let’s take a look at these celebrities’ collections and see what types of sneakers they own and which ones are their favorites.

Anything MJ sneaker, he had to have, and I believe he does. He even has the first sneakers MJ ever wore. Another name that seems to take up a lot of space in his closet is LeBron. Nate owns plenty of LeBron James’ line of sneakers along with Spike Lee. Nate has so many sneakers that I don’t think he knows exactly how many pairs he owns, but his collections takes up more than one closet.

The star of Creed does share the name with the biggest name in sneakers so it does stand to reason that he would have a hefty sneaker collection. And of course, there are a good number of MJ’s sneaker line in his collection. Michael B. boasts of owning over a hundred pairs of sneakers. He’s got sneakers of all colors and does like the brightly colored sneakers that you’d expect to see a celebrity wear.

Bright reds, blues, and even white ones trimmed in pink. Michael doesn’t need an occasion to buy himself a new pair of sneakers, but on Valentine’s Day, he gave himself five new pair of sneakers, just because. When asked if he had to pick which sneakers were his favorite, his answer was pretty predicable. Michael B. Jordan loves his Jordan’s and claims that the two are pretty inseparable.

DJ Khaled is a famous American record producer, record label executive and radio personality. In his early days, he befriended unknown names and mentored them, like Birdman and Lil Wayne. In the music business, DJ Khaled is a big name and a celebrity. He’s also a big sneaker connoisseur. Khaled has built an entire room dedicated to his sneaker collection. Wall-to-wall and floor-to-ceiling shelves of just sneakers, and in the midst of all those sneakers, he is still able to pick out his favorites and has doled out nicknames for some of his favorite sneakers that include, “The Red Sea,” “Don’t Ever Play Yourself,” and “Hotline Bling.”

Khaled has every sneaker under the sun, and actually claims he does have every type of sneaker. His line of Jordan’s is impressive, Air Jordan’s to every other Nike sneaker imaginable. His closet is a sea of colors; sneaker colors. Yeezy Boost 350’s sit on his shelf along with a pair of blue and white Fragment Jordan 1’s. Khaled even has a box dedicated to his Miami Heat collection with specially made sneakers stamped with his name on them. As long as they’re making new sneakers, DJ Khaled’s collection will be growing. Looks like he’ll need to start constructing a new room for more sneakers.

Rapper Eminem apparently has a sneaker fetish according to his manager, Paul Rosenberg. Eminem has always been about casual in his attire on and off stage. He loves the look of sweats and caps, T-shirts, and of course, a pair sneakers to go with it all. When you have the kind of money Eminem has, you don’t have to wear the same couple of pairs of sneakers over and over, with every outfit. Instead, you own hundreds of pairs of sneakers to go with all your different sweats and T-shirts.

According to his manager, Eminem has some favorites that he does like to wear and of course, Air Jordan’s make the list – Air Jordan’s IV, that is. He also favorites the Air Maxes. Apparently he is the Air Max king and with the name Eminem, you’re going to get extra perks, like Michael Jordan doing up a special pair of sneakers, which he did do for Eminem, a pair of Air Jordan II’s.

John Mayer has been on the music charts for years with such songs as, “Say What You Need to Say,” and “Waiting on the World to Change,” plus hundreds more. Most people recognize Mayer as a guy with a casual, classic look and sneakers on his feet. Having a big collection of hit songs isn’t the only thing John Mayer has. He also has a collection of sneakers. When you go for the look Mayer has, sneakers are the finishing touch and you need lots of them to interchange with everything else in your wardrobe.

Mayer’s sneaker collection include the Kennedy-inspired New Balances, Dunks, Air Maxes and Blazers. Mayer’s love for sneakers goes beyond just being his personal choice for comfortable footwear, but he’s into sneakers at the design level too. He has said that a dream of his is to design an Air Max. Knowing Mayer, he probably will.