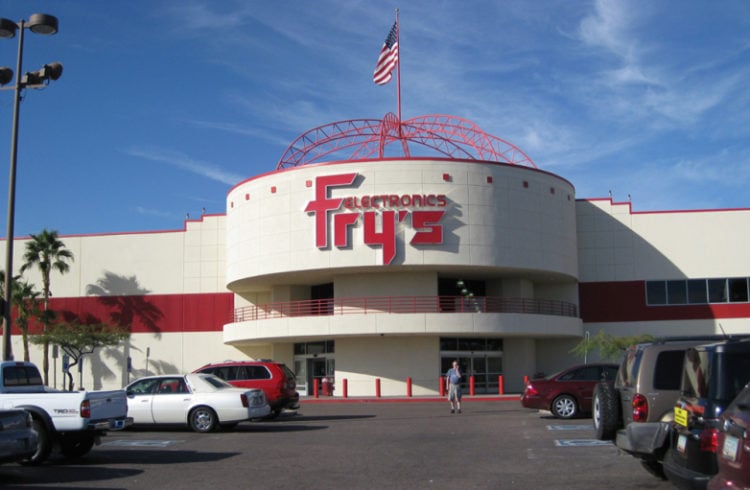 Fry’s Electronics is a big-box store that specializes in selling electronics for consumers as well as a wide range of related products. Since its headquarters can be found in San Jose, it should come as no surprise to learn that most of its 30+ stores can be found in the state of California, though it is important to note that it has a presence in other states as well. On the whole, Fry’s Electronics is a player of some note in its chosen markets, as shown by the fact that its revenues are in the billions when measured on an annual basis. Here are 20 things that you may or may not have known about Fry’s Electronics:

1. Connected to Fry’s Food and Drug

Given their names, it should come as no surprise to learn that there is a connection between Fry’s Electronics and Fry’s Food and Drug. In short, Charles Fry sold Fry’s Food and Drug, which was still called Fry’s Supermarkets at the time, in 1972. From the proceeds, he proceeded to give around $1 million to each of his three sons John, Randy, and David, who went on to participate in the founding of Fry’s Electronics.

In total, Fry’s Electronics had four co-founders. As stated earlier, three of the four co-founders were the sons of Charles Fry. Out of the three, John was the one who had a clear interest in electronics, seeing as how he had served as the IT manager for Fry’s Supermarkets. In contrast, the other two brothers were uninterested in selling groceries but proved to be more receptive to the concept of selling consumer electronics. As for the fourth co-founder, well, she was Kathy Kolder, who remains the executive vice president of the chain.

3. John Came Up with the Basic Concept

John was the one who came up with the basic concept for Fry’s Electronics, which was based on the co-founders’ familiarity with selling groceries. This can sound rather strange in modern times, but it is important to remember that Fry’s Electronics was founded in 1985. As a result, while the concept of a big-box store for consumer electronics and related products might not sound that unusual to us, it was much more innovative in those times, so much so that it played an important role in enabling the chain to carve out a segment of its chosen markets.

The first Fry’s Electronics was based in the city of Sunnyvale, which can be found in the state of California. Primarily, it is famous for being one of the cities that make up Silicon Valley, which in turn, explains why it is home to a number of tech companies as well as their operating centers. Besides this, it is interesting to note that Sunnyvale is one of a small number of U.S. cities that have what is called a Department of Public Safety, meaning that each of its personnel is trained for the duties of an EMT, a fire fighter, and a police officer.

Perhaps unsurprisingly, the first Fry’s Electronics was founded in Sunnyvale because its co-founders saw a huge potential market. After all, the city was home to a huge number of engineers as well as other people in related fields, so much so that the first Fry’s Electronics was surrounded by them. As a result, the location was swarmed by customers lured in by the convenience, which is why it had to relocate not once, not twice, but three times within a short period of time because it needed more retail space to keep up with the interest in its products.

It is rather amusing to note that some of the earlier Fry’s Electronics locations sold groceries in addition to their standard selection of products. As a result, these locations would market themselves to interested individuals as one-stop stores for the people who worked in Silicon Valley. Over time, this strategy proved to be less than satisfactory, which is why the selection of food at Fry’s Electronics became smaller and smaller until there was nothing remaining besides snacks.

Curiously, the Fry brothers are not holding on to their controlling shares of Fry’s Electronics on their own. Instead, they have handed those shares over to a limited liability company as well as a limited liability partnership, meaning that they control Fry’s Electronics in an indirect manner. The motivation for said move has never been explained to the public. In fact, it wasn’t even revealed to the public until Randy Fry’s ex-wife launched a challenge against her post-nuptial settlement with him, which ended up being dismissed in the end.

8. Had More Competitors in the Past

In the past, Fry’s Electronics had more competitors. Some of those competitors still exist in the present, but others have collapsed for one reason or another. For example, Incredible Universe was one of the few chains that went head-to-head with Fry’s Electronics, but in the end, its fate was being absorbed by said chain. In contrast, both Circuit City and CompUSA were once powerful competitors, but both of them went under when the Great Recession swept through the United States as well as the rest of the world. Nowadays, Fry’s Electronics has few competitors of note, which is a significant change from the earlier part of its existence.

One of the few competitors of note that remain to Fry’s Electronics is Best Buy, which should be familiar to a lot of people out there as a chain with stores beyond the United States. However, it is interesting to note that there is a significant difference between the two chains, which has some impact on the kind of people who shop at them. In short, both chains offer assembled computers. However, Fry’s Electronics offers computer parts for people who want to build their own computers as well, which is one of the things that made them so popular with their initial market.

11. Campbell Location Has an Egyptian Theme

For example, the Campbell location of Fry’s Electronics has an ancient Egyptian theme. In particular, it makes extensive use of King Tut, which would be the nickname of the Pharaoh Tutankhamen. This is perhaps unsurprising, seeing as how said individual is perhaps the single most famous Pharaoh out there in spite of the fact that he was by no means an impressive ruler. Instead, his fame comes from the fact that his tomb was uncovered with more of its treasures still in it when compared to other tombs belonging to other Pharaohs because tomb raiding has been a serious problem since, well, ancient Egyptian times.

12. San Jose Has a Mayan Theme

Meanwhile, the San Jose location has a Mayan theme, which is meant to honor that particular civilization’s astronomical achievements. After all, what the ancient Maya achieved was rather impressive, particularly since Mesoamerican cultures had a serious lack of domesticated and domesticable animals. For proof, look no further than the fact that the ancient Maya had no pack animals whatsoever, meaning that they were forced to be more reliant on manpower than their counterparts across the Atlantic Ocean. In fact, the ancient Maya didn’t even have a lot of the food animals that we take for granted, though they did still have some such as the turkey.

13. Fountain Valley Has a Roman Theme

As for the Fountain Valley location, its chosen theme is the Roman Empire, as shown by its aqueduct. This makes a fair amount of sense because while the ancient Romans might not have been particularly famous for their cultural achievements, they were excellent builders who happened to have been very, very active in that regard. As a result, while plenty of Roman buildings fell into ruin, numerous examples remained useful for local residents centuries and centuries later, thus serving as lasting reminders of the building capabilities of the Roman Empire.

14. San Marcos Has an Atlantis Theme

On a semi-related note, the San Marcos location is based on the stories of Atlantis, which remains a storied location in spite of the fact that it seems to have been created by the philosopher Plato for the purpose of illustrating his perfect society. With that said, that hasn’t stopped a lot of people from speculating about what it might have been as well as where it can be found. One particularly famous theory is that Atlantis was inspired by the Thera eruption, which was a huge blow to the Minoan civilization.

15. Phoenix Has an Aztec Theme

The Fry’s Electronics in Phoenix has an Aztec theme, which is why it is decorated to resemble an Aztec temple. Interestingly, while the Aztec Empire extracted tribute from places that fall within the boundaries of modern Mexico, it is known that it influenced places even further out through the processes of trade. One piece of proof is how the Aztec Empire had turquoise goods that had come from what is now the American Southwest, which suggests the existence of a far-reaching trade network.

16. Has Been the Subject of Customer Complaints

In the late 1990s, more than one publication reported on the poor customer service at Fry’s Electronics. In particular, Forbes reported on the existence of what was called the “Double H,” which was supposed to have been a policy of deliberate delay intended to convince customers seeking refunds to give up because of sheer frustration. Something that did not look good for Fry’s Electronics to say the least.

17. Its Marketing Has Come Under Fire

Speaking of which, the marketing for Fry’s Electronics has come under fire in the past as well. The most famous example came in 2003, which saw a team-up between Denzel Washington, Bruce Willis, and Arnold Schwarzenegger when they sued the chain for using their images on its marketing materials without having secured their permission beforehand. Each of the trio sought $10 million in their lawsuit.

18. Was Sued by the U.S. Equal Employment Opportunity Commission

20. Has Been Aggressive about Its Domain Names

Fry’s Electronics has been pretty aggressive about its domain names. For example, it secured Frys.com from a seller of French fry vending machines, who had attended the same university at around the same time as the Fry brothers. Furthermore, Fry’s Electronics has made an attempt to secure similar-sounding domain names, which has sometimes been successful and sometimes not so much so. In the case of one failure, Fry’s Electronics was ruled against by the arbitrator presiding over the case because it didn’t have more of a right to use “Fry’s” than the numerous businesses out there with similar-sounding names.