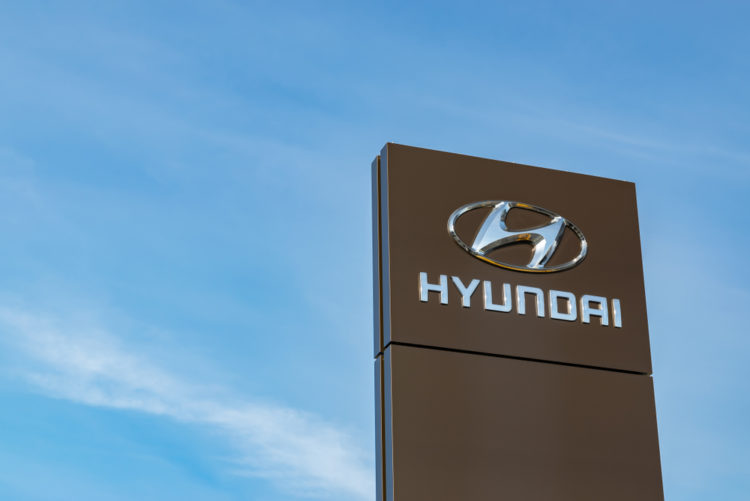 South Korean automobile giant Hyundai Motors may have only been around for just over 50 years, but the company has seen tremendous growth and development throughout that time. It’s one of the youngest automobile corporations throughout the world, and it has managed to reach the levels of other established companies in such a small amount of time. The Hyundai logo is becoming more and more recognizable, including its luxury subsidiary, Genesis Motor. Let’s take a look into the history of this South Korean company and the meaning and story behind its logo.

Although Hyundai wasn’t formally founded until 1967, the company actually started a couple of decades before. Hyundai founder Chung Ju-Yung incorporated the Hyundai Engineering and Construction Company in 1947 to help promote the country’s industrialization and reconstruction after the war. However, Korea was again invaded in 1950, which delayed the development of the company until 1967. At that time, Chung Ju-Yung had relocated to Busan and was working with whatever manufacturing materials he could get his hands on.

The first Hyundai was released in 1968. Interestingly enough, the Cortina was manufactured in partnership with the Ford Motor Company. The response to the Cortina inspired Chung Ju-Yung to pursue the automotive industry further, hiring some of the industry’s best worldwide. From 1975 to 1985, Hyundai released the Pony and set on a massive production and exportation venture globally. The company’s early aggressive marketing likely set the course for its success years later. During this time, Hyundai still didn’t meet US emission standards; therefore no Hyundais were allowed in the country. By 1985, however, the Hyundai Pony was the top-selling car in the Canadian market. In 1986, Hyundai released what would be considered as one of the best cars ever released, the Excel. Due to lower emissions, the Excel was allowed into the US market, where it became an instant success.

From the late 80s and throughout the 90s, Hyundai continued to push the envelope in engineering and development. Although the company created some impressive proprietary products, they suffered a setback from poor quality and reliability scores. Hyundai’s reputation in the US market suffered greatly during this time. Hyundai had to make massive improvements in order to gain back the reputation it had before.

From the mid-90s on, Hyundai would continue its tradition of growth and development without sacrificing the quality of its cars. The company again became known as one of the most reliable cars in the market, which was helped greatly by its 10-year warranty offers. Hyundai released its luxury line, Genesis, in 2013, which has already won awards when it came to customer satisfaction. Today, Hyundai is the fifth largest automobile manufacturer in the world when it comes to sales.

In Korea, the name Hyundai means “modern.” It stands for the company’s commitment to forward thinking when it comes to quality car manufacturing. The Hyundai logo actually fits its name quite well. In its early years, the Hyundai logo was vastly different from the way it is now. The logo started off as a black and white monogram of HD. The typeface was extra bold, and the surrounding rectangular outline was also bold. That was actually the car’s logo from 1974 until 1992. In 1986, the company opted for a more subtle approach to the logotype. This time, the logo would carry out the entire company name rather than just a monogram. It was basically a nameplate, a traditional practice of Asian cars at the time. The Hyundai company name was written in a simple and slim font—easy to read and easy to distinguish.

After Hyundai’s sales began to rise, it became clearer just how much the company needed to solidify its image with a solid logo. Brand and logo association would improve brand recognition, and Hyundai was clearly on its way to further growth. The designers at Hyundai opted for a simple logo design. At first glance, you can rightly recognize a tilted or italic letter H symbol, encased in an oval. However, we all know that there are always subliminal images hidden in logos.

In the case of Hyundai, the hidden image is quite meaningful. The letter H emblem not only stands for the company name, but it also depicts a picture of two human figures. Each of the two vertical lines represents people—one represents the company and the other represents the customer. The two are connected together by the horizontal line in the middle, which symbolizes a handshake and a partnership between both entities. The entire emblem is made to signify mutual respect and trust. Although most people won’t rightly know the story behind the Hyundai emblem, it still naturally evokes feelings of friendliness and good nature. Aside from the logo’s hidden meaning, the curves, shape, and tilting of the emblem does the trick to make it appear soft and likeable. It’s the true genius behind the design of the Hyundai logo. It might seem simple as ever, but it’s actually one of the most thought out designs we’ve seen in a while.

Today, the Hyundai logo is one of the most recognizable logos not only in the industry but also generally throughout the world. The Hyundai emblem and logotype has remained largely the same since its initial design apart from minute detail changes. It’s likely that the symbol will also remain the same as long as the company exists. It has worked well for the company over the years, and what it represents stands for so much more than just a marketing trick. Hyundai’s commitment to quality is a show of respect for all its customers, and that respect is clearly represented on the very logo that carries the company. If Hyundai continues on the same path it’s been on since the 80s, the company can only find even more success in the future.