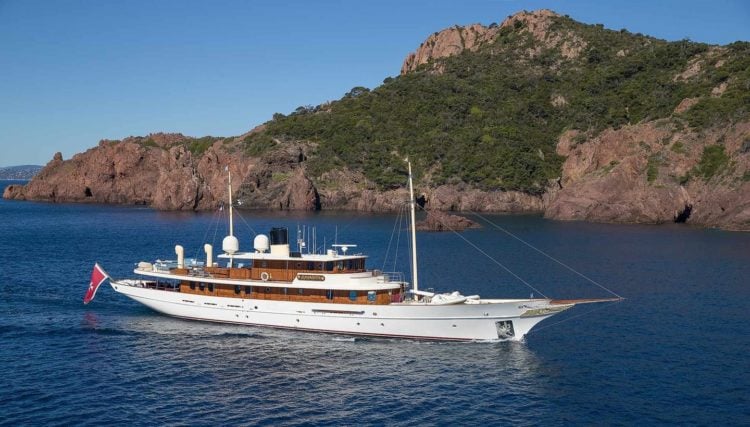 We’ve all seen J.K. Rowling’s rise to fame ever since the first Harry Potter book was published. The success of her career was a true rags-to-riches story, and J.K. Rowling deserves all the fringes of life for giving us one of the best literary series of all time. Now that she’s no longer a starving artist, J.K. Rowling makes sure she lives an excellent life; and one way she’s doing just that is by enjoying her yacht, the Vajoliroja. J.K. Rowling has enough money to buy whatever yacht she wants, and we’re going to take a look at why she picked this particular one to call her own.

Vajoliroja had another big time celebrity owner before it belonged to J.K. Rowling. The author bought the yacht from actor Johnny Depp. The yacht was a gift from Depp to his former partner Vanessa Paradis. Depp and his family, including his two children with Paradis—Lily-Rose and Jack—spent a great deal of time on the Vajoliroja. The couple named the yacht Vajoliroja as a play on the Jolly Roger pirate flag. It also combines the names of their family: “Va” for Vanessa, “Jo” for Johnny, “Li” for Lily-Rose, and “Ja” for Jack. It was a charming sentiment until Depp and Paradis went their separate ways. When Depp married Amber Heard in 2015, Vajoliroja’s name was changed to Amphitrite, Poseidon’s sea goddess wife in Greek mythology. Depp gave Amphitrite to his then new wife as a wedding present.

Vajoliroja’s price tag was £22 million, which is a small dent on J.K. Rowling’s billion-dollar net worth. For the novelist, it wasn’t about having the most lavish yacht at the marina. In fact, Rowling and her family spent one holiday on Depp’s boat and immediately fell in love with it. Rowling bought the yacht in 2016.

When Depp had Vajoliroja renovated in 2008, he didn’t hold back at all. The 156-foot superyacht featured 10 cabins. The crew took up five of those cabins, and the rest were left for the guests to enjoy. The yacht had three decks that scream bohemian, which is more of Depp’s style. There’s a subtle pirate theme that’s probably a nod to one of Depp’s most iconic movie roles—Captain Jack Sparrow. The yacht is filled with luscious fabrics and plush décor. There’s wood everywhere, which adds to the overall charm of the yacht. The seating areas are covered in attractive red velvet as well as plenty of the seating in the outdoor areas. There’s a covered dining area on one of the decks, which offers a stunning view of the waters when the yacht is at sea.

The yacht carries plenty of water activities to keep anyone entertained. There’s space available for waterskis, wakeboards, kayaks, snorkeling gear, and so much more. For those who prefer a different cup of tea, Vajoliroja is also outfitted with plenty of other entertainment opportunities. There’s a home cinema, satellite television, high speed Internet, video games, and so much more. There are also plenty of spaces for those who prefer to just lounge around, read all day, or even get some sun.

The yacht was originally built in Turkey by Turquoise, a luxury ship building yard. It’s made out of steel and aluminum and was designed with a 1930s theme. While the yacht is totally modern as it was built in 2001, it doesn’t feature all the sleek lines of contemporary ships. The mahogany wall panels prove just that, and the whole interior of the yacht projects a beautiful old-world feel. Where there’s no wall paneling, the walls are covered in intricate and rich-colored wallpaper. The heavy drapes are even tasseled, and the whole ship is dimly lit. Some call it romantic. Others call it historic. Still there are those that might feel magical in the yacht.

Vajoliroja may have vintage décor, but it doesn’t feel vintage when it comes to comfort. The master cabin is something worth experiencing. It features a large marble-accented bath that’s only second best when put next to the 180 degree ocean view. While the other guest cabins aren’t as fancy, they are still opulently decorated and extremely comfortable. The galley is well stocked and is the perfect place to make gourmet meals. The yacht can accommodate up to five cabin crewmembers at any given time. It has a cruising speed of 12 knots and has the capability of up to 2,500 nautical miles with its 28,000-liter fuel tank.

It’s the perfect yacht to take on vacation, and Rowling spent some good time on it with her family. Vajoliroja or Amphitrite, however, is no longer Rowling’s yacht. The novelist put the yacht up for charter and for sale back in 2017. At the time, it was available to charter for $130,000 a week. It was also for sale with a pricetag of $19.2 million USD. It’s definitely the type of yacht that only the wealthy could afford. Rowling enjoyed the yacht for about 8 months before she put it up on the market. Of course, it could’ve been just the busy lifestyle that kept her away from the seas too much. Rowling is reported to still own the yacht to this day, but Vajoliroja is still available for charter. You’ll be able to stay out at sea for a good amount of time with this yacht. It’s truly the perfect getaway that’s charming and truly out of this world. Being on the yacht is an experience unto itself—one that can be quite unforgettable.