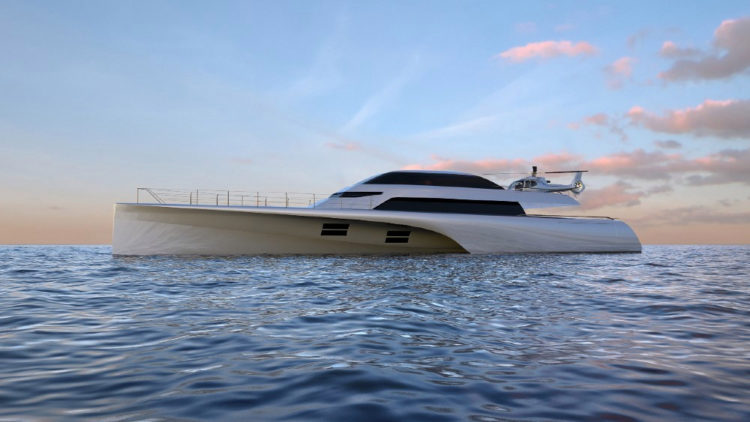 In 2018, Mark Evans, the CEO of McConaghy Boats, told Aero Yacht that he loves challenges and creating something he can be proud of is the best part of his job. By then, the project he felt was the most significant accomplishment was the Adastra, the first 140-foot all-composite super-slender trimaran the company had ever built. It was completed in 2012, taking about four years to conceptualize and another four years to construct. Evans is now ready to unleash another outstanding achievement ̶ the 153-foot MC155 trimaran listed for $26.5 million. Here is a closer look at the superyacht.

It Was Conceptualized in 2017

On August 10, 2017, Boat International published that Design Unlimited, a British studio, had released concept details of a yacht that would be developed in collaboration with McConaghy Boats and Mani Frers. According to the article, the vessel would be built as per the MLC (Maritime Labor Convention) and LY3 regulations. The MLC regulations apply to warships and naval auxiliaries, traditional ships, fishing vessels, and ships navigating sheltered waters. The LY3, on the other hand, applies to large yachts that are 24m or longer; the vessels also should engage in commercial use, carry no cargo, and have a maximum of 12 passengers. The MC155 falls under the LY3 code because its accommodation is meant for a maximum of nine passengers housed in four cabins and a crew quarters that can accommodate six people. The collaboration among the three meant that while Design Unlimited would provide interior décor, Frers would be responsible for exterior styling and all aspects of naval architecture; the construction was left to McConaghy Boats.

According to Yacht Harbour, by the time the concept details were released, the design had undergone extensive changes. Pure Design was also set to handle composite engineering while DNVGL had made a peer-review regarding the yacht’s sea-keeping qualities. With the concept already finished, they were ready to start production although other sources reported that construction would begin upon contract. In August 2019, the International Institute of Marine Surveying revealed few more details concerning the project. According to IIMS, the project was in progress. Since pre-engineering, tank testing, and interior designing were complete, the yacht had been listed for sale with Camper and Nicholsons for $26.5 million. As per the tank test results from the Potsdam facility in Germany, the superyacht was anticipated to exceed expectations regarding its roll, pitch, and hydrodynamic resistance. The preliminary results also showed that the MC155 could deliver a top speed of 24 knots and cruise at 14 knots with a maximum range of 2,500 nautical miles. Furthermore, the performance would equal that of a 23m monohull.

Given the immense work already put in the project, you could feel the disappointment in Evans’s statement when he told Robb Report that the buyer who commissioned the yacht pulled out when his business changed. According to the CEO, MC155 is more than a concept. He explained that they invested heavily during the developmental stages, and the original plans had been put in place since 2019. He added that they had done most of the work after spending two years in engineering and designing. Now all that remains is bringing the concept into reality, a process that could take at most two years. Besides the buyer pulling out, there have been other changes. For instance, while before it was expected to deliver a range of 2,500 nautical miles at cruising speed, they now claim that the MC155 will deliver over 4,500 nautical miles over the 14mph cruising speed. Additionally, the top speed that had been said to be 24 knots has now changed to 35 knots. Despite the changes, one thing that has remained constant is the efficiency and hydrodynamic resistance. Evans proudly insisted that the drag coefficient in the MC155 is so low that the running costs can only compare to a monohull half the size. He added that even when compared to a similar-sized yacht, the MC155 would still be efficient in running costs, speed, and fuel. The MC155 is so efficient in fuel usage that it can cross the entire Atlantic Ocean on a single fuel tank.

Frers’ concept is for the upper deck to have the owner’s suite fit for royalty; it, therefore, will have walk-in closets, a private gym, a lounge area, and an en-suite bathroom. The amenities in this master bedroom have a 180-degree view of the horizon. It would not be a princely owner’s suite without a touch-and-go helipad on the private deck space accessible via sliding glass doors. It is important to note that the yacht utilizes loads of heat reflective glass that ensures the guests will enjoy natural light without being roasted, especially when cruising in the summer temperatures. The main deck is dedicated to lounging and dining, and on it are a Jacuzzi pool, sun loungers, sofas, and a cocktail bar. These are all on the 11.3m beam, and the owner can decide to close off the interior space for a more formal or private area.

Evans remarked that the 36-foot beam makes finding space in a marina easy. The main hull is below deck and comprises three large en-suite cabins. The port hull is very spacious, while the slender outer hulls have enough room to store nautical toys. The tenders are also deployed from the outer hull, with the starboard hull opening being spacious enough to fit two jet skis, paddleboards, and kayaks. While all these features are in the concept, Evans disclosed that the future owner could customize the finer details and interior fixtures and fittings to desired taste. For instance, the McConaghy Boats CEO said that even if the yacht has enough power, the owner can promote environmentally friendly methods such as using electric or battery-powered systems that facilitate zero emissions.