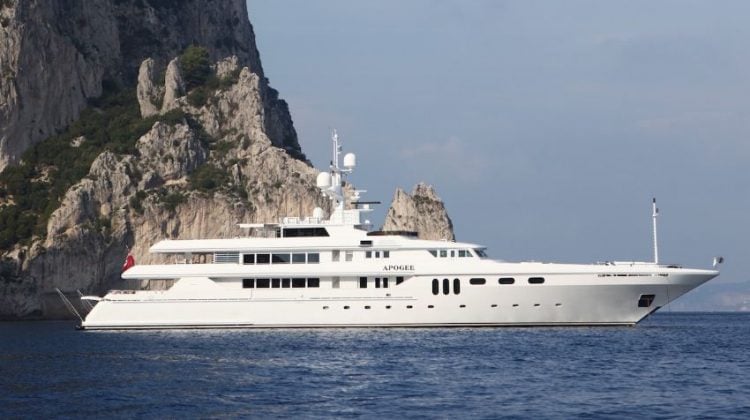 As far as luxury and super yachts go, the Apogee Luxury super yacht can be compared to a 5-star hotel floating on the ocean. This 62-meter motor yacht is all about fun and comfort, and its sleek exterior is only a hint of the splendor inside. And, like every other super yacht worth its name, the Apogee packs astounding power and speed underneath the hood. Few people have stepped into the Apogee motor yacht, but this article will give you an overview of everything that goes into making this luxurious yacht.

Apogee – What is in the Name?

According to renowned billionaire Darwin Deason, the proud owner of Apogee, the name was chosen to symbolize just how much he is always willing to spend on the luxurious yacht. Apogee is a Greek name for pinnacle, and Deason chose the name to express how expensive owning and maintaining the yacht is. Speaking to Forbes, Deason terms the yacht’s price and maintenance cost as ‘foolish money’, but he certainly does not mind spending it. Apogee’s exterior is the work of renowned designer Codecasa. The 62-meter long yacht is designed to portray luxury, thanks to its smooth curves and sleek aluminum body. As you may imagine, the yacht is breathtaking in every instance.

Codecasa was also responsible for engineering, and nothing is left to chance. The yacht features an ultra- modern stabilization system that guarantees smooth sailing in rough waters even at high speeds. Another notable feature is the bow thrusters that not only give her a compact look but also make her easier to maneuver at low speeds.

Apogee’s exterior is certainly breathtaking, but the interior is where all the fun and highlights are. Room is certainly not lacking in this 62-meter long super yacht, as it accommodates 17 crew members and hosts up to 12 guests. There is a total of 7 rooms: the master room, four double cabins, and two twin cabins, in addition to the crews’ chambers. The rooms are moderately spacious and feature elegant décor and beautiful furnishings. What’s more, each room is fitted with a HDTV, stereo speakers, an iPod station, and Wi-Fi to keep in touch with the outside world. All bathroom features are either gold or gold-plated.

The master bedroom is where all the opulence and comfort rests. It is very spacious with amenities such as a Jacuzzi, walk-in closets, private study, and a love-seat with a complimentary armchair. Showers and closets come in twos: one for the men and another for the ladies. Perhaps the most utilized amenity on Apogee is the bar, and rightfully so, as Deason confesses of his love for hosting parties. The bar and lounge are miniature replicas of the Hotel de Paris, where Deason says he had his first dream of owning a yacht. They are complemented with seven leather swivel club chairs, a large TV, remote-controlled arched mirrors for privacy, and the smoothest alcoholic and non-alcoholic beverages.

There’s a main seating area as well with three sofas, four armchairs, and two central cocktail tables. For entertainment, there is a large HDTV covered with beveled mirror sliding windows, in addition to Xbox and PlayStation gaming consoles. The dining area, on the other hand, is spacious enough to accommodate all 12 guests, and there is an elevator to get you to every deck on the yacht.

The better part of the fifth floor hosts a gym fitted with modern training equipment sufficient for a full- body workout. The gym has an awesome view of the ocean which, when coupled with the cool breeze in the region, makes exercising really pleasant. It is equipped with training equipment such as life cycle bike, treadmill, triceps machine, strength station, skipping ropes, free weights, and fitness balls, among others. Other amenities include a 12-person Jacuzzi on the observation deck, a large breakfast bar, built-in banquette, and a semi-circular banquette designed for star-boarding.

The sky lounge features a 22-foot bar to port with leather swivel club chairs. The three windows behind the bar are covered with remote controlled arched mirrors for privacy. The sky lounge also comes with a wide center for disco/dancing or Wii, as well as a smoke machine and disco ball/lights. There’s a Wurlitzer juke box behind the cabinet doors and a karaoke machine for those with Cinderella dreams. To complement its impressive interior and elegant exterior, the Apogee packs quite a lot of power under the hood. As mentioned earlier, it features an ultra-modern stabilization system that makes sailing smooth and flawless. Its fuel tank holds up to 160,000 liters of fuel, sufficient to see her through 6000nm. The yacht’s cruising speed is remarkable at 14 knots, but it can be increased up to a limited speed of 17 knots without compromising comfort and stability. The Apogee is always docked for maintenance for about two months every year, ensuring that it is on top shape throughout the year. The Apogee is exceptionally expensive. Only a few people are familiar with the exact figure, as Darwin Deason has never revealed his buying price. A price estimation by experts, however, place its present value at around $70 million. Although most people may not afford to buy the Apogee, you can actually spend some time on it whenever it is available for charter. In his interview with Forbes, Deason says that he charters out the yacht every winter and summer to help offset maintenance costs. Weekly charges during the summer can reach up to $350,000. These charges cover everything from the staff’s services to foods and drinks.

The Apogee is still causing a buzz in the world of luxury super yachts more than 10 years after its initial production, thanks to its outstanding design and performance capabilities. With enough room to host up to 12 guests and 17 staff members, the yacht is undoubtedly massive, to say the least. Coupled with amenities such as a Jacuzzi, a bar designed after Hotel de France, and plush lounges, the Apogee super yacht is somewhat of a floating paradise.