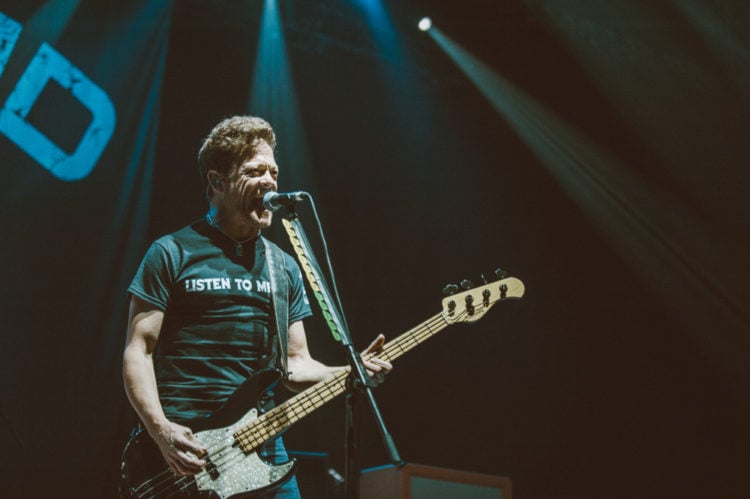 Jason Newsted was born on March 4, 1963, in Battleground, Michigan. When he was fourteen, his family moved to Kalamazoo, where he began to discover rock music, starting with the group Kiss. Listening to their music led him to other metal groups, including Ted Nugent, Rush, Blue Oyster Cult, and Black Sabbath. While listening and learning from the masters, he started playing bass in local groups. Throughout his career, he’s founded his own bands, written hit songs, and played with countless successful musicians and groups. This is Jason Newsted’s journey to a net worth of 60 million dollars.

In 1981, Jason Newsted left Michigan with a friend heading for California with dreams of making it in the music business. However, they only made it to Phoenix. While there, Newsted formed his first group, Dogz, which later changed their name to Flotsam and Jetsam. They focused on a new style of heavy metal music, thrash. Much of their influence was one of the heaviest hitters in that genre, Metallica. In the mid-80s, Flotsam and Jetsam signed with Metal Blade Records and released Doomsday For The Deceiver. Newstead was the primary songwriter on the album. His group quickly gained recognition, but Newsted’s career was about to take a sharp turn in a new direction.

Metallica’s bassist Cliff Burton died in 1986 during a terrible bus accident while on tour. Even though the group was reeling from the death, they decided to start auditioning for new bass players to continue their careers. Newsted couldn’t resist trying out for the group, even though Flotsam and Jetsam were doing exceptionally well. After Metallica auditioned many different bassists, they selected Newsted, but it was challenging to fill Burton’s shoes. According to IMDb, Newsted quipped, “When I came into Metallica, I had to do justice to Cliff’s work, but I had to also put my own signature on it; no one could be Cliff Burton; Cliff Burton was the Jimi Hendrix of bass.”

For the first six months of his tenure with Metallica, he was a session musician. However, he became a full member in April 1987. In an interview with Blabbermouth, he talked about the early days with the group. He felt that his presence in the group helped created equilibrium after Burton’s death. In the early days, the other members just wanted to have him because they were still reeling. Nonetheless, Newsted was with the group as the shot to the top of the charts and gaining mainstream success. It’s estimated that the 1991s Black Album was so successful that each group member never had to record another album to live comfortably for the rest of their lives. During his time with Metallica, he felt that his skills were underappreciated. Although Newsted was an accomplished songwriter, he only received songwriting credits for several of the group’s songs, including Blackend and My Friend in Misery. He still remains Metallica’s bassist, who lasted the longest. However, things finally came to a head in 2001, when Newsted felt his voice wasn’t heard when the group began writing a new album. He decided to focus on a side project and quit.

After leaving, he started a new group, Echobrain. He stayed with the group only a year before moving on to another group, a thrash metal band from Canada called Voivod. He remained with the group for six years, appearing on the albums Phobos, Voivod, Katz, and Infiniti. Much like some of his early gigs, he felt like he could go no further with the group, so he left to pursue other projects. In 2011 the supergroup WhoCares was spearheaded by Deep Purple’s Ian Gillan and Black Sabbath’s Tony Iommi; they added several other members, including Newsted. The goal of the group was to raise money to support a school in Gyumri, Armenia. It was a single album project. Although, it did produce one hit single, Out of My Mind/Holy Water. Newsted’s next project was a new band, Jason Newsted and the Chophouse Band. It’s a complete departure from other work he’s done since they cover songs of a wide variety of artists, including Johnny Cash, Tom Waits, Neil Young, and Bob Dylan. The group is still together and touring. Newsted enjoys his new group because it’s a group of musicians who are collaborating and having fun.

Newsted reunited with Metallica on the Rock and Roll Hall of Fame stage in Cleveland, Ohio, when the group was inducted on April 4, 2009. He has also won several Grammy’s. During his days with Metallica, they won Best Hard Rock Performance for the Garage Inc. song, Whiskey In A Jar. In 2000, he won Best Rock Instrumental Performance for The Call of Ktulu.

Most of Jason Newstead’s fortune is from his work as a bassist. However, he also has a music publishing company Jasonic and is the founder of Chophouse Records. He’s had a storied career working with some of the masters in the industry and founding several successful groups. He even does some philanthropy work for Little Kids Rock, an organization that provides free musical instruments to underprivileged kids. Newsted said, “I was going to back off and actually thought about retiring, but it keeps calling me back, and I’m going to keep going as long as it calls me. I really think it has something to do with the good vibes that I feel that I’ve spread through my performance and through the time I spent with my fans.” Once Newsted was actually accused by other members of Metallica of spending too much time with the fans. Nonetheless, it’s his commitment to music that has amassed him this large fortune. Since he has no plans of retiring, it will no doubt continue to grow.