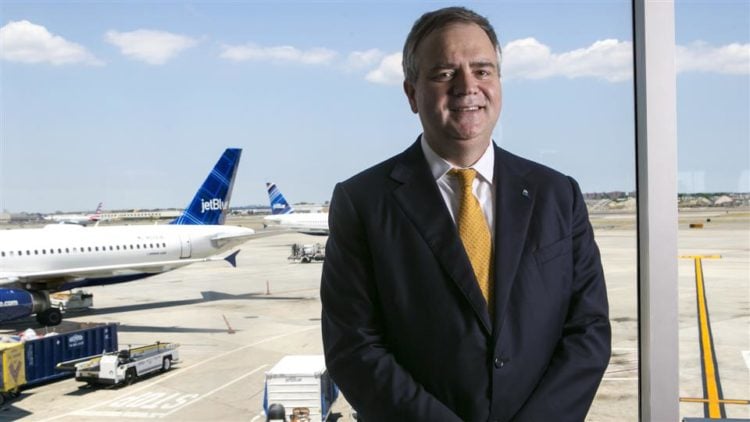 JetBlue has slowly climbed up the ranks of best airlines since the company first started jetting people all over the world. JetBlue offers some of the best prices, best services, and best aircraft in the industry. JetBlue CEO Robin Hayes is largely to thank for that given his solid employment with the company for the last decade or so. The popularity of JetBlue continues to go sky high, but there aren’t many things any of us hears about the leader of the company. Here are 10 things you should know about JetBlue’s CEO, Robin Hayes.

Robin Hayes became Chief Executive Officer for JetBlue on February 16, 2015. That means he’s been heading the company for only 4 years now. Hayes, however, started working for JetBlue back in 2008. He served as Executive Vice President for JetBlue for roughly 6 years until he became CEO. Apart from serving as Executive VP, Hayes also worked in various operational and commercial positions throughout the US and Germany. The 52-year old CEO is fairly young still and is looking forward to a long career with JetBlue into the future.

The only other significant experience Robin Hayes has to count towards his qualifications for CEO is his tenure at British Airway. As a total, Hayes worked an impressive 19 years for British Airways before moving forward. During his stay with that company, he’s had a variety of operational and commercial responsibilities, which got heavier and heavier as the years went on. Hayes, however, started humbly right on the frontlines. He started off assisting customers while working Glasgow, Scotland.

Hayes holds a few degrees from the same university. He attended and received his Bachelors degree in Engineering from the University of Bath. The school is a public university located in Somerset, United Kingdom and is currently ranked as the 6thbest school in the UK according to the Guardian University Guide. After he received his bachelor’s, Hayes went on to work for his Master’s in engineering degree. For his postgraduate degree, he also went to the University of Bath to receive his degree in electrical and electronic engineering.

Currently, Hayes serves as director in 4 boards. The first is of course, JetBlue. He has been director for JetBlue’s board since February 16, 2015—also his CEO appointment. In addition to JetBlue, Hayes also serves as Director of The Partnership for New York City. The Partnership for New York City is a nonprofit organization comprised of about 300 CEO’s from New York’s top businesses. The nonprofit is set up to work with the government and other companies to maintain and enhance New York’s economy. He’s also a board member for The Wings Club and Airlines of America, Inc.

The airline industry is a solid business to be in, and Robin Hayes is getting a generous compensation annually for being CEO and Director of JetBlue. His annual salary is currently at $578,750. In 2018, Hayes also received a total cash compensation of $1,235,447. In addition to those, Hayes also receives stock options. Overall, his compensation for the fiscal year 2018 added up to roughly $3,585,000.

As CEO, you might expect Robin Hayes to sit on his desk majority of the time. He does that, for sure, but Robin has a different management strategy. He’s the type of CEO that likes to get to know his employees—no matter how many there are. So Hayes actually spends a good amount of time flying on JetBlue aircrafts just so he can speak with the flight crew. He says that one-on-one time with every single crewmember is probably the most crucial thing he can do to make sure his company is the best that it could be. Hayes believes that personal connection is the key.

Some people prefer the window seat. Others prefer the aisle. There’s also a rare few that prefer the middle seat. For Hayes, his preference would have to be the aisle seat but not for reasons you might think. Everything this CEO thinks about has to do with this company and how best to service it. The reason why Hayes prefers the aisle seat is so that he can help crewmembers do the “Blue Turn,” which is when all cabin crew help each other out in cleaning the plane. This keeps cleaning costs low for the company, and as a CEO, he’s willing to pitch in.

Growing up in London, Hayes was always interested in trains as a child. As a matter of fact, he had absolutely no interest in airplanes at all. He always believed that the train industry was much more accessible to people compared to the aviation industry. He was also 18 years old when he first got on a plane. He wanted nothing to do with flying. Instead, he wanted to become a train driver.

His first job in the aviation industry also happened to be his first job in the United States. He worked at a duty free store the Logan International Airport in Boston. He never thought that this job would eventually lead him into becoming a CEO for a major corporation. In fact, he had small failure during that first summer job. He wanted the $50 prize for getting perfect attendance, but he ended up getting sick on his last day of work.

His passion for anything that’s working and moving is essentially what got him to pursue aviation after college. He began to fall in love with the industry the more time he spent working in it. Although aviation came later to him, he believes that he’s found just the right place where he belonged.