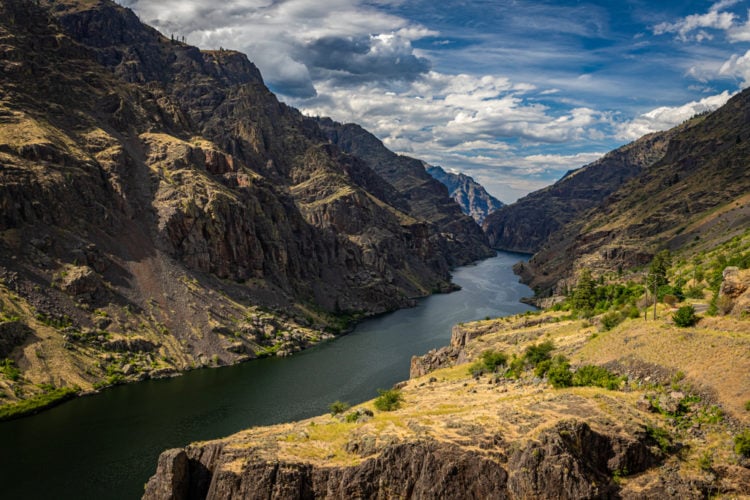 Idaho is one magnificent place, but for those who haven’t been there or haven’t lived in the area, it may seem like one gigantic, boring landscape. This could not be further away from the truth. Anyone who has been there will tell you that the state has a plethora of different landscapes and landmasses, all of which provide an aesthetic appeal and provide both domestic and foreign tourists with some of the best hiking trails in The United States of America. Whether it be the sprawling valleys and the expansive canyons to the looming mountains and the myriad of hills in the area, the state of Idaho has it all. This article aims to help you identify some of the little-known canyons in the state so that next time you decide to take a hike, you will know exactly where it is you want and need to go.

There are a couple of canyons in Idaho that are more popular than the others. Hells Canyon and Snake River Canyon are some of the most widely recognized sites in the states. Even though they are some of the most interesting sites in the area, a couple of Canyons can hold their own and give them a run for their money. One of them is Bruneau Canyon. It is located a small distance outside a small town called Bruneau, according to Helene In Between. The hike you will take along the canyon’s rim is, as those who have taken it have said, awe-inspiring. In fact, the canyon itself isn’t even visible until you get right to the edge of the wall canyon. However, once you are there, it is a sight to behold and one that you will not forget any time soon.

From the name, you might guess that there is something ominous about this particular canyon and that inference would be spot on. The Black magic canyon is one of the most unusual canyons you will ever lay your eyes on. The black canyon, being the old geological site that it is, is located to the north of Shoshone, and, surprisingly enough, not many people know about it. The reason for its ominous appearance is a pretty natural one, even though many rumors have been floated around over the years. Its unusual landscape was carved over thousands of years by the Big Wood River, according to Only in Your State. One thing you can expect is that the canyon will live up to its supernatural name. Its twisty and jagged formations appear to be outsourced from another planet.

Owyhee Canyonlands, in the Owyhee wilderness

The Owyhee wilderness is one of the most underappreciated landscapes in the United States of America. Even though it does not get the hype that is often associated with places like the Frank Church River in the No Return Wilderness Area, it can still hold its own. The Owyhee Canyonlands are a thing of beauty, mainly because of the fauna and flora that act as an interlude between one canyon and the other. Thus, if you and your loved ones decide to take a trip or hike in the area, you can be assured that you will have the time of your life.

When it comes to recreational water bodies, the salmon river is one of, if not the, best place to go for a dive, a swim, and a hike. It offers the best place to go for a bit of fishing, kayaking, and whitewater rafting, and the fact that it winds through some of the most aesthetically pleasing and splendid canyons that the state has to offer makes it the best place to visit. Nothing compares to the feeling induced when you are rafting and rowing down the river and looking at the magnificent canyon walls that surround you on both sides. Gazing at the magnificent, Enormous, and yet magnanimously powerful forces of nurture is awe-inspiring.

Box Canyon, near the Twin Falls

The Box Canyon is a state park that is located approximately twenty miles northwest of Twin Falls. It is the quintessence of a hidden gem. The main reason why many people love it so much is because it contains the bluest of waters, so much so that it has been said that they could rival those in the Caribbean. The aforementioned turquoise water bubbles from the ground up before traveling through the canyon and making its way into the Snake River. The beauty of the canyon thus comes from both the fact that it is desolate and also because of the pristine water that meanders its way through it.

The Green Dragon is located along the Owyhee River in the southwestern part of Idaho. It contains towering red cliffs, which, it must be said, will make you fill like an atom in comparison. The green dragon canyon offers the most isolated landscape that the state of Idaho has to offer. It is the perfect place to get away from the helter-skelter of life and immerse yourself in unending natural beauty.

Even though Hell’s canyon is known, especially in Idaho, most people know it because of its geological features and not because of the aesthetic that it comes with. Of course, it is the deepest river gorge in North America. However, there is a lot more to it. Those who have visited it and explored the rugged wilderness have found ancient tribal carvings on the rocks, as well as deserted ranches, and even closed-up gold mines, according to Trip Advisor. All in all, it has so much to offer that you would be making a mistake if you did not visit it while you were in Idaho. The place comes with tour guides and recreational and dining facilities, so you don’t really have to worry too much. However, it must be said, especially during the summer, that the place is usually jam-packed, so make sure that you get there early enough.