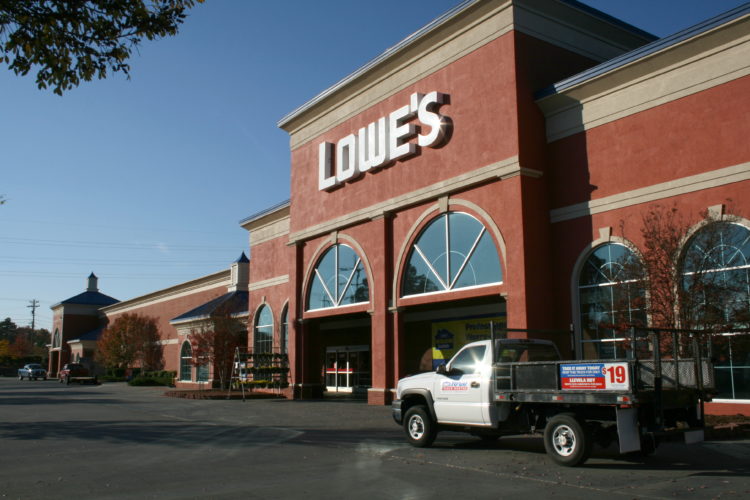 When it comes to investing in the stock market, there are literally thousands of options. You will first need to decide what type of investment you are interested in. For some, this entails taking the risk associated with buying shares in the anticipation that the price will increase quickly and can be sold for a profit. The downside to this is that the share price can also dramatically, leaving you cash short. Others are income investors, and they want a return on their investment. The home improvement industry continues to boom, so this is where many look today.

Income investors are not as concerned with a rapid increase in the price of the stock, as they are going to hang onto it for the long term. Income investors are looking for companies that have a history of paying dividends on a consistent basis. This allows them to keep their shares, while be assured that they will receive a per share return once of several times a year. Lowe’s has long been considered a solid long term dividend stock, and it still worthy of your consideration. Here are some reasons why that is the case.

When you are looking at a company to invest in, you want to know that they have a solid record of distributing earnings to its shareholders. While an increase in share price over time is always expected, income investors are willing to see a gradual such increase in exchange for a dividend being paid on a consistent basis. This is exactly what has been the case with Lowe’s. In fact, this company has paid out a cash dividend on a quarterly basis to all shareholders since 1961. That is really quite impressive if you stop to think about it.

Lowe’s in a home improvement store that is well known to nearly every American. They have diversified their products lines throughout the years to reflect a changing and ever-evolving society. As such, they have exhibited an uncanny ability to be successful over the long term, and this has contributed to its ability to increase the number of its dividends over time. Just recently, for example, the company announced that it was going to increase the amount of its dividend once again in the neighborhood of seventeen percent.

How Has Lowe’s Remained Successful?

When income investors look at a company, they look at the business model. A company might be successful today, but it is another thing entirely for it to be able to sustain that same level of success for the long term. Lowe’s has proven to be one such company. Americans are always looking to remodel their own residence. They want to improve the design, paint, add cabinets, and the list goes on. There is no shortage of customers for Lowe’s and the company has flourished as a result.

Lowe’s has a proven track record. It has been around for such a long time because it provides it customers with exactly what they want. People who go into the store can expect to find what they need, get quality service, and pay reasonable prices. Because of this, Lowe’s has developed customer and brand loyalty. There are millions of people who almost exclusively go to Lowe’s for their home and business remodeling needs. They also have a number of contractors throughout the country who rely on them to get the job done.

From an investment perspective, Lowe’s has retained its ability to attract investors because they have a proven track record of paying out dividends to their shareholders. In fact, they strive to increase the amount per share of those dividends every year, and they largely succeed in this endeavor. Their growth is sustainable for the future, so it appears that this record of dividend payments should only continue for years to come.

The last five years have seen investors do quite well with stock in Lowe’s. They have received an annualized return of roughly 138 percent. This amounts to just about 19 percent every year. There is a dividend yield of 2 percent that should be accounted for as well. This puts investor returns for the last half decade at more than 20 percent per year. Few other investments can deliver those returns for such little risk. This is the key. Income investors are not looking to take on very much risk. There is very little risk involved with Lowe’s at the current time.

Growth of Dividends Throughout Time

Many companies start out paying attractive dividends to its shareholders in an effort to attract more seed money. However, they are unable to sustain that record and quickly fall by the wayside, only to leave income investors in the lurch. There is no such worry with Lowe’s. They have been able to sustain their dividend payments. As mentioned, Lowe’s has been able to payout a dividend every quarter since 1961. While they do not promise an increase in payments every year, that has actually been the case since 2004. That is impressive, and it allows investors to rely on quite an income every quarter depending on the number of shares that they own.

Lowe’s has a proven track record. It has been around for such a long time because it provides its customers with exactly what they want. People who go into the store can expect to find what they need, get quality service, and pay reasonable prices. Because of this, Lowe’s has developed customer and brand loyalty. There are millions of people who almost exclusively go to Lowe’s for their home and business remodeling needs. They also have a number of contractors throughout the country who rely on them to get the job done.

If you look at 2013 to 2018, you will notice that the dividend payments increased from $0.18 to $0.48 per share. This is paid every quarter. Over the course of five years, that amounts to an increase of 167 percent. That is most impressive, and it is a primary reason why Lowe’s is such a solid long term dividend stock.