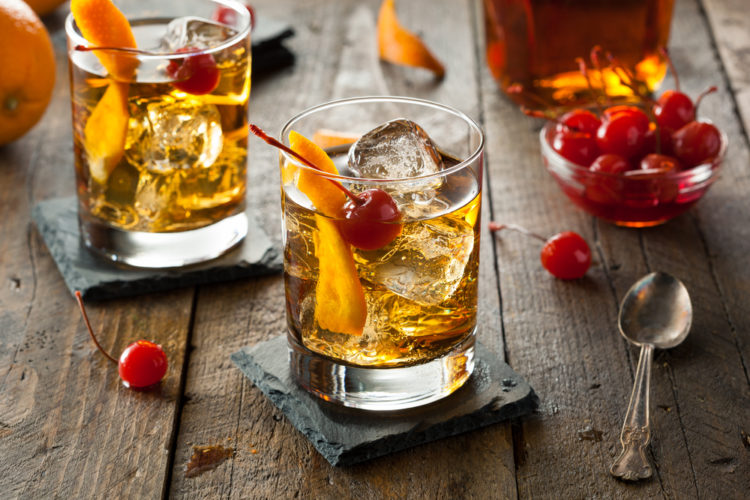 The fruity, colorful past of the gin-based Aviation Cocktail goes as far back as the dawn of the twentieth century when it first appeared in the 1916 book, Recipes for Mixed Drinks by New York bartender, Hugo Ensslin. Despite its brief popularity, the alcoholic beverage was shelved into obscurity when one of the primary ingredients, creme de Violette liqueur, disappeared from the market during the 1960s. It wouldn’t be until 2007 when Haus Alpenz of Minneapolis, Missouri began importing Rothman & Winter creme de Violette from Austria that the purple-colored Aviation Cocktail would regain popularity. Now with this becoming more readily available, bars, clubs, and households have been enjoying this alcoholic beverage. This recipe also includes another essential ingredient, namely maraschino liqueur.

What makes an Aviation Cocktail what it features the following ingredients:

While recipes call for a certain list of ingredients, it’s not always what’s on the list that makes a drink go from ordinary to extraordinary. The more quality the ingredients involved are the better. While it seems the Rothman & Winter is the favorite creme de Violette liqueur, at least according to Haus Alpenz, what would be the best maraschino liqueur to work with?

From the Netherlands, Bols has firmly established itself as a quality producer of different liqueurs that is highly favored among mixologists around the world. The Maraschino liqueur from Bols has a decent blend of candied cherries mixed with marzipan, making it a perfect addition to any cocktail that benefits from its sweet flavor. Because of its reputation for being a solid favorite, bottles of Bols Maraschino Liqueur can be easily found at most liquor stores, as well as other liquor-licensed establishments. The average price tag for a bottle is about $19.00 USD.

Coming out of Turin, Italy, the prize-winning Fratelli Vergnano Maraschino Liqueur is a certified organic product. The production of this cherry-based alcoholic treat began in 1865, using the formula to macerate the carefully selected cherries in alcohol for a full year. This is to ensure the sourness of a classic cherry pie flavor experience is as optimal for the discerning palette as possible. Among finer establishments that serve up Aviation Cocktails, seeing a bottle of Fratelli Vergnano on the shelf is not uncommon. Since it’s considered a premium choice as a maraschino liqueur, the cost of a bottle normally sits around the $27.00 USD range.

This cherry-based liqueur comes from the Dijon, France region. Gabriel Boudier Dijon has been in the business of producing maraschino liqueur since 2001, despite the fact the company has been in the business of making fruity liqueurs since 1874. The marasca cherries used to make this liqueur is imported from Croatia, which then undergoes a three to five-day maceration process. Afterward, these cherries are distilled in an alembic pot still. For Aviation Cocktails that would rather keep the gin out of the equation in favor of more maraschino liqueur, Gabriel Boudier Dijon’s bottle is usually the favorite choice to do so. What makes this particular maraschino liqueur stand out is the hint of almond and chocolate which leads to the concept of a gateau. $33.00 USD is usually the price tag to obtain such a bottle from a liquor store.

Denver, Colorado’s Leopold Bros. is considered to have a standout product when it comes to its formula of putting together a maraschino liqueur. The fresh and floral aroma adds to the experience of making a quality Aviation Cocktail that elevates the drink from average to premium. Delicately balanced as a sweet and bitter blend of the Croatian-imported crushed and fermented marasca cherries, the liquor also features the distilled Montmorency cherries and coriander. According to Leopold Bros., an opened bottle of this maraschino liqueur should be completely consumed within a span of thirty days. If it seems this achievement isn’t possible, storing the bottle in a refrigerator will extend its lifespan. Normally, a bottle of Leopold Bros.’ maraschino liqueur goes for $37.00 USD.

Maraschino liqueurs have been a favorite ingredient for a number of alcoholic beverages in addition to the Aviation Cocktail. Now that society seems to be entering the golden age of cocktails, the popularity of maraschino liqueurs has been rising as a result. Combine that with the liqueured cherries that can be served in the same manner as olives or any other garnish, and the possibilities to either perfect or come up with new recipes seem endless.

The Five Best Gins to Use for a Paper Plane Cocktail

The 20 Most Dangerous Bridges in the World

How Irina Shayk Achieved a Net Worth of $25 Million