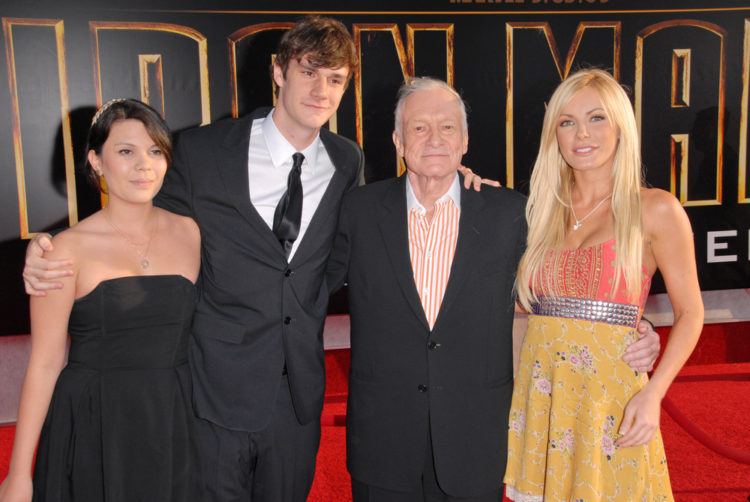 You already know who Hugh Hefner is. After all, you’d have to have been living under a rock for the last 30 years not to recognize that name almost instantly. One name that you might not recognize so quickly is Marston, one of his sons. Aside from guessing that the two are related because of the last name, what do you really know about Marston Hefner? Is he living a life just as dynamic, interesting and sometimes frenzied as his father’s? Perhaps his life is completely different. Below are 10 facts about him that will help you get to know him better.

He says that he’s a writer and it seems that those claims can be backed up, as he has written a book about zombies entitled “Bleed”. According to his social media accounts, he thoroughly enjoys writing and sees it as an opportunity to get away from the more mundane parts of life. It’s also a way that he can distance himself from being Hugh Hefner’s son, something that undoubtedly gets rather overwhelming at times.

2. He writes under a different pen name

As a matter of fact, he’s been so desperate to distance himself from the Hefner name that he actually writes under a different pen name. He chose to keep his first name, Marston. However, he changed his second name (albeit unofficially) from Hefner to Glenn. He says that it’s because he wanted to be able to write with freedom and achieve a certain level of success on his own accord, without his last name helping him achieve those things.

3. He loves to play video games

He says that when he’s not writing, he can probably be found playing video games. It’s one of the things that he loves to do more than anything else. Not surprisingly, he seems to especially have a fondness for video games about zombies. It seems that he spends a great deal of time trying to find a way to immerse himself in an alternate reality, perhaps because he has a vivid imagination. On the other hand, some have speculated that it has everything to do with his upbringing and the fact that he isn’t entirely proud of constantly being associated with his father as opposed to being seen for the individual that he is.

4. He’s had some legal trouble

Unfortunately, he’s also been in some legal trouble. He was once dating the individual who was at that time the Playmate of the Year. According to her, he started beating her. Much of it was hushed up so there isn’t a great deal of information known. However, he was charged with the crime. The judge even sentenced him to an entire year in a domestic abuse program. Therefore, there had to have been something to those claims or it’s highly unlikely that those events would have ever happened.

5. He used to head up a student task force for human rights

Despite the fact that he got into trouble for beating his girlfriend, there was a time when he headed up a task force in college that was designed to further the cause for human rights. Unfortunately, he has been described as being emotionally unstable for a fair amount of his adult life, something that could have potentially led to the incident between him and his girlfriend. That is especially plausible when you consider the fact that up until that time, he seemed to have a strong desire to stand up for those who didn’t have a voice of their own.

6. He wants nothing to do with the family lifestyle

He has said many times that he wants absolutely nothing to do with the family lifestyle. He’s gone on to say that it’s not just the magazine or the constant presence of naked women that he wants nothing to do with, but also the fame and the riches that come with it. He says that he has always craved a more normal existence, something that he has worked hard to give himself since growing up and largely distancing himself from the rest of the family.

7. He and his brother couldn’t be more different

There’s no doubt about it, he and his brother couldn’t be more different if they tried. While Hefner has four children, it’s only Marston and Cooper that share the same mother. Cooper is now heading up the Playboy empire, carrying on the legacy that was established by his father. Marston, on the other hand, gave up that lifestyle a long time ago. As soon as his mother and father separated back in 1998, he went to live with his mother and has been distancing himself from the Hefner legacy ever since.

8. He was close to his father

Despite the fact that he purposefully distances himself from the Hefner stereotype, he was still close to his father. He even made time for the two of them to be together at least one night a week, beginning when he was still a child. This is something that continued well into adulthood. In fact, most people believe that the two were still quite close upon his father’s passing.

9. He likes to play Backgammon

One of the things he routinely did with his father was play backgammon. It’s a game that he still loves to play to this day. In addition to enjoying it, he’s also quite good at it. He’s quick to point out that if anyone challenges him to a game, they had better have a few tricks up their sleeve if they plan on winning.

This may not be much of a surprise, especially knowing that his dad is Hugh Hefner. When his father died, he left him a few million dollars as part of his inheritance. Add to that his endeavors as a writer, and it’s believed that he is currently a millionaire several times over. However, he’s also quite reserved so any specific information about his net worth is largely unavailable.

20 Things You Didn’t Know About OpenSea

10 Tax Deductions You Had No Idea Even Existed

Why Toyota Brought The Venza Back

How Much Does a Harley Davidson Ultra Classic Cost?

What is a Rolex Daytona Panda and What Does it Cost?

Tiffany’s Most Expensive Piece of Jewelry Ever: The World’s Fair Necklace

The 10 Richest People in Malaysia

How David Portnoy Achieved a Net Worth of $120 Million

How Tommy Lee Jones Achieved a Net Worth of $90 Million