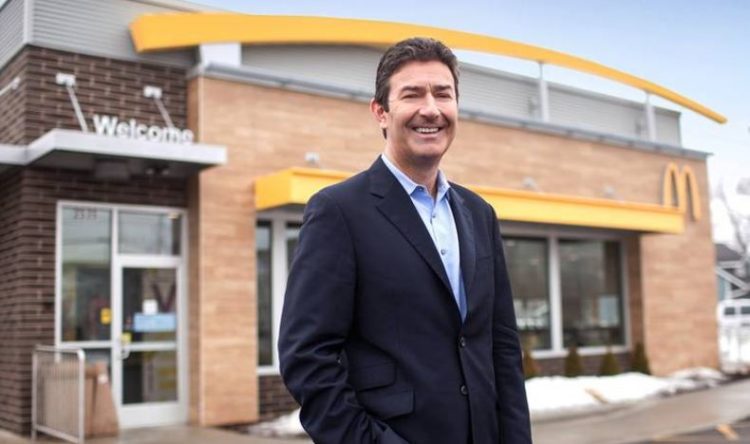 McDonald’s is one of the most popular fast food restaurant chains in the United States, and abroad. Their CEO is Steve Easterbrook. He on board on the first day of March in 2015 and has led the fast food giant in an interesting and new direction since commanding the helm just 3 years ago. Just who is Steve Easterbrook? There aren’t many that know much about the man behind the golden arches so here are 10 things you didn’t know about Stephen Easterbrook.

While Easterbrook may only have three years as McD’s CEO under his belt so far, he’s been associated with them for much longer. He started out with the chain as a manager in 1993. He left to pursue other career options in 2011 but returned again in 2013 until being promoted to CEO in 2015. It seems that there was something that just kept calling him back to the company and now, he’s running the show.

Easterbrook was born in Watford, England in August of 1967. He is of British nationality but he currently lives in Chicago, Illinois in the United States. He relocated to accept the position of CEO of McDonald’s but prior to that, he served as the head of the company’s UK and Northern Europe divisions. When Don Thompson stepped down at the end of January in 2015, the decision was made to put Easterbrook in his place. Stephen is 51 years old.

3. He attended school with Nasser Hussain

Stephen was educated in England, the place of his birth at the Watford Grammar School for Boys. After completing this phase of his education, he attended St. Chad’s College, Durham University where he studied natural sciences. While he was there, he played cricket and one of his teammates and a fellow student was none other than the former England cricket captain Nasser Hussain.

4. He’s brilliant in capitalizing on the competition’s weaknesses

Easterbrook is observant and not much gets past him. In a brilliant move to improve the standing of McDonald’s in the United States, he took a good look at competitors such as Chipotle Mexican Grill and assessed their strengths and weaknesses. What made them so successful and what took them down? He took the good and implemented it at McDonald’s, and one of his discoveries is that customers were allowed to customize their meals. You might have noticed that there are quite a few options that weren’t there before he came on board in the U.S.

Stephen Easterbrook is now settled into his new position as an executive of McDonald’s and is living in Chicago, Illinois. His family is there with him. He’s married and he and his wife have three children and it’s been reported that they pay their local McDonalds restaurant a visit at least two to three times a month.

It wouldn’t seem fitting if Easterbrook wasn’t a fan of the team that he played for in college. In case you were wondering, he’s a dyed in the wool fan of the team. He follows their progress as closely as many Americans do the NFL.

7. His annual compensation is more than $15 million

McDonald’s pays the CEO, Steve Easterbrook a whopping compensation package of $15.4 million. It has been reported that his salary is $1.3 million and he’s given stock options valued at $9 million along with incentive pay of $4.6 million. This is a jump in pay from the $7.9 million package he received in 2015.

8. He worked for a few different companies before McDonald’s

Right after finishing his degree at the university, Easterbrook went into training with Price Waterhouse as an accountant. He worked with them until joining McDonald’s in 1993, then left briefly to work at PizzaExpress as their CEO, then as the CEO of Wagamama, both prominent chains in Britain.

9. He’s responsible for the changes we’ve seen at McDonald’s in the past few years.

McDonald’s started offering more $1 soda deals along with their options for building your own burgers. In addition, the McPicks that allowed customers to pick two items from the menu for $5 and the signature crafted sandwiches were the work of Easterbrook.

10. He made everyone happy with breakfast all day

It was common for customers running a few late because of long lines to miss the breakfast menu in past years. Although there had been talk of serving breakfast all day, nobody did anything to implement the plan. It wasn’t until Easterbrook came on board that the American public got what it had been demanding for years. This shows everyone that he’s not a talker, he’s a doer.