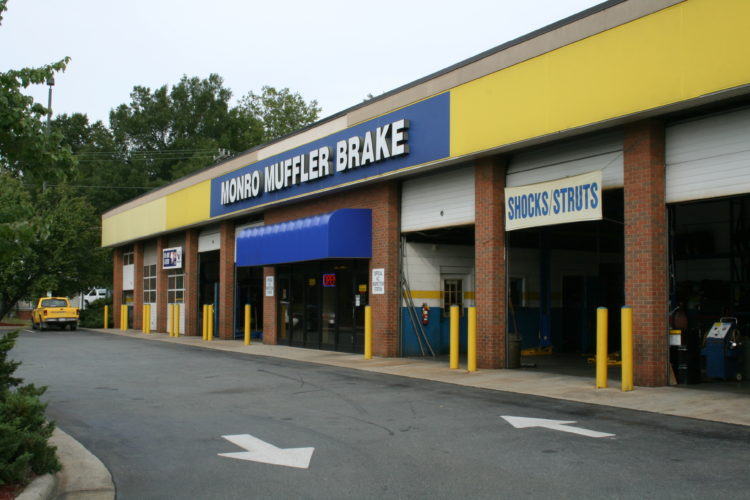 Monro Muffler Brake is one of the largest automotive services companies in America. Since its inception as a small, upstate New York based service company, Monro has experienced exponential growth: as of 2019, it employs a staff of over 6000, operates from more than 1240 stores, 98 franchised locations and 3 retread facilities across 30 states. Its vision is to be America’s leading auto and tire services center, built on its values of exceeding customer expectations, providing consistent vales and maintaining a committed bank of professional and knowledgeable staff. With year- on- year growth recorded for the past 18 years (with 2017 being the first year it crossed the $1 billion sales mark), it seems well on track to achieving its goal. Read on to discover more about the ever expanding Monro Muffler Brake.

1. It was founded by Charles J August

Monro Muffler Brake was founded in 1957 by American businessman Charles “Chuck” J. August. August created the company as a Midas Muffler franchisee in Rochester, New York. His association with Midas continued until 1966, at which point he broke ties with the company to re-launch as Monro Muffler. Joining August in the new company were his brother, Burton S. August, and business partner, Sheldon Lane. August named the company after Monroe County, New York, but choose to drop the “e” for the company branding. He would later rename the company Monro Muffler Brake, Inc. after adding brake services to its portfolio.

Although the company proved successful, August held back on extending its reach too quickly, determining careful, incremental growth to be preferable to rapid expansion. Over the course of a decade, August slowly introduced new sites to the company’s portfolio; by 1977, it had 20 stores in New York, by 1979, the number had grown to 43. After its slow but steady start, the company began to fire up its expansionist ambitions, making several noteworthy acquisitions and increasing its stores to a total of 59 by the mid 1980’s.

3. August sold his interest in the company in 1984

In 1984, Monro Muffler Brake changed hands when founding father Chuck August decided to sell his controlling interest in the company to an investment company led by Donald Glickman and Peter J Solomon. Despite stepping down from the helm, August wasn’t quite ready to break his ties with the company altogether and negotiated a deal to stay on as a member of the board of directors. He remained with the company in a non-managerial capacity until his resignation and retirement in 2002.

4. It launched its first public offering in 1991

Without the influence of his August’s prudent approach, the company entered a period of transformation and rapid growth under its new ownership. One of the key chance was its transition from a privately held company to a publicly traded one, something which happened in 1991 when Monro made its first public offering on NASDAQ under the symbol “MNRO.”

Under August, Monro was a predominantly upstate New York based company. That all changed in 1998, when its new president and CEO Robert G. Gross started rolling out an aggressive expansionist policy. In September 1998, the company more than doubled in size when it acquired over 200 Speedy Muffler King sites across the US from Speedy Muffler King, Inc. The expansion didn’t stop there: in 2004, Monro acquired all 25 stores and 10 kiosks of the Maryland chain of tire dealers, Mr. Tire. Later that year, it bought out five branches of Rice Tire (later to be rebranded as Mr. Tire Auto Service Centers). Today, Mr. Tire Auto Service Centers has over 130 outlets across the US.

Monro’s expansionist efforts in the 1990’s continued unabated into the new millennium. 2006 saw the company acquire 75 ProCare outlets; 2010 witnessed the company expand into the Mid-West with the purchase of 26 Autotire stores; 2011 began with the acquisition of 5 Import Export Tire Co., outlets in Pittsburgh, Pennsylvania and ended with the purchase of Courthouse Tire. 2012, meanwhile, saw Monro acquire 8 local auto service and retail groups, 31 outlets in Indiana, Illinois and Tennessee, and 27 outlets in Kentucky and Indiana. In 2013, Monro bought out Curry’s Auto Service in Virginia and Maryland, along with four S&S Firestone stores and six Carl King Tire Stores. The rapid growth has continued with each subsequent year, to the effect that Monro has, over the course of 20 years, acquired 30 companies with over 500 stores in near enough every state in the US.

In May 2019, Monro pushed the boundaries of its expansion once again when it acquired 40 Certified Tire stores in California. The acquisition represents the group’s first venture into California and brings the grand total of serviced states to 30.

8. It operates under multiple brands

Monro’s rapid expansion over the past 3 decades has seen it acquire multiple companies, not all of whom have gone on to take the Monro name. Of its many regional brands, those that still fly by their original banner include Mr. Tire Auto Service Centers, Tread Quarters Discount Tire Auto Service Centers, Autotire Car Care Centers, Ken Towery’s Tire & AutoCare, The Tire Choice & Total Car Care, Tire Warehouse Tires for Less, and Tire Barn Warehouse.

After years of rapid growth, the company now operates from over 1240 stores spread across 30 states. Its 3 retread facilities, 8 wholesale locations and 98 franchised locations serve vast portions of the country, including the Mid-Atlantic and New England regions, portions of the Great Lakes, Midwest, Southeast, Louisiana and California. With each new year seeming to bring another load of acquisitions and openings, don’t bank on those figures staying stagnant for long.

When Chuck August began Monro all the way back in 1954, it’s offerings were fairly basic. Indeed, it wasn’t until several years after its initial launch that it even started offering brake services. Today, the company offers an all-encompassing range of services designed to suit every requirement and need you could think of. From oil changes to brake systems, from wheel alignments to suspension systems, from exhaust systems to tires, from Transmission flush and fills to State inspections, from Scheduled maintenance to Tune-ups, Monro has it covered.

11. It offers a credit card

Not content with restricting its expansionist ambitions to new store acquisitions, Monro has recently branched into finance. Customers of Monro can now apply for a Monro Drive Card that allows easy payment at any of its 1175 locations. Advertised as a “fast, convenient way to make your tire and service purchases”, the company is pushing the card for all its worth, even offering 6 months promotional financing on brand tires or service purchase when its used as the primary payment method (although a minimum purchase amount does, unfortunately, apply).

In 2017, Monro recruited Brett T Ponton for the position of CEO and President. Ponton has extensive experience in the industry, having previously served in various executive leadership roles at The Goodyear Tire & Rubber Company. He also bough a wealth of experience in operational turnaround to the company, having worked for over 10 years in leadership roles in private equity backed companies. Prior to joining Monro, Ponton served a CEO of American Driveline Systems; during his time with the company, he oversaw its successful acquisition to private equity sponsor.

13. Ponton is backed by a stellar team

14. Its plan for growth are built around 4 pillars

As we know, Monro has implemented an aggressive policy of expansion over the past couple of decades. To ensure it continues in the right direction, the company has based its plans for continued, sustainable growth on a scalable platform known as the ‘Monro Forward.’ The platform predicates on 4 key pillars: 1. Improve Guest Management: the first of its pillars is based on offering a consistent in- store experience, a first-class store appearance and great online reputation. 2. Optimize Product and Service Offering. The 2nd of Monro’s pillars is simple: optimize tire assortment and refine its sales technique. 3. Number 3: Enhance Customer-Centric Engagement. Essentially, this one is all about customer acquisition and retention. The fourth and final pillar is accelerate productivity and team engagement: in layman’s terms, this means offering a clearly defined career path to its employees, an enhanced training program, and aligned remuneration.

15. It’s expanding its collaboration with Amazon

In May 2019, Monro announced it will be expanding its collaboration with Amazon.com (which currently allows customers to purchase tires from Amazon.com and select to have them shipped to outlets operating the Monro brand) to roll out tire installation services at an extra 400 Monro outlets in nine additional states across the Central and Western regions. The move will double its number of service location to over 800.

Whatever Monro is doing, it’s clearly working. Over the last 18 years, Monro has show continual year-on-year growth; a phenomenal achievement for any business. In 2017, the company crossed the $1 billion sales mark for the first time, and it shows no sign of slowing down anytime soon. In 2018, sales increased by 10% to $1.128 Billion, while acquisitions completed in the same year represented a total of $20 million in annualized sales.

17. It launched a new retail and corporate website in 2018

In September 2018, Monro launched its new, modernized corporate and retail website. The new website contains topical information about the company’s mission statement, cooperate values, leadership structure and financial performance. In a press statement issued at the launch, Deborah Brundage, Senior Vice President of Marketing and Merchandising said, “We are very pleased to launch these websites, a critical step in our efforts to improve the overall customer experience and build a robust omni-channel presence. Our new websites better position us to address our customers’ needs and communicate with valued stakeholders.”

18. Its CEO presented at the 2019 UBS Global Consumer and Retail Conference

In February 2019, CEO Brett Ponton and Executive Vice President and Chief Financial Officer Brian D’Ambrosia presented at the 2019 UBS Global Consumer and Retail Conference in Boston, MA. According to CoreSight, the annual conference offers key industry executives, institutional investors and UBS professionals the opportunity to collaborate, network and “gain a detailed perspective on upcoming trends and leaders in the sector that are driving disruption”.

According to its website Monro now employees more than 4,000 certified technicians. When it comes to their pay, PayScale reports the average service technician/ mechanics salary at Monro is around $39,956.

Monro might be the leader of the pack when it comes to size and location, but when it come to gender equality in the workplace, it most certainly ain’t. According to PayScale, Monro is still a man’s world: 85.7% of its workforce is male, while only 14. 3% is female. When it comes to crunching the rest of the numbers, most employees would rate themselves as “satisfied”, 33.3% are in their early career, 20% in their mid-career, 13% are experienced, and 26.7% are in their late career.