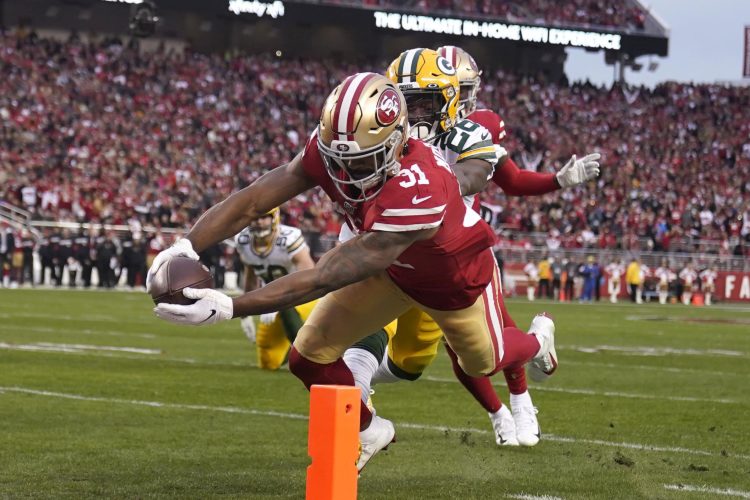 Welcome to the big stage, Raheem Mostert. If you’re not a fantasy football player you may not have really heard of the San Francisco 49ers running back until this weekend’s NFC Championship game. The Niners punched their ticket to the Super Bowl on Sunday with a convincing 37-20 victory over the Green Bay Packers. In the game, Mostert ran for 220 yards on 29 carries and had 4 touchdowns. The touchdowns weren’t goal line plunges either – the 27-year old journeyman running back scored from 36, 9, 18 and 22 yards out. It was a record-setting day for #31 and has now not only put the spotlight firmly on him, it has also set him up for a potential pay day when his contract expires in a couple years. With Mostert’s stock on the rise, here are 10 things you probably didn’t know about him:

Mostert’s big game on Sunday earned him numerous records and also etched his name in the storied history of the San Francisco 49ers. He became the first player in NFL history to rush for over 200 yards and score four touchdowns in a single game. This also includes the first time in NFL history a player had over 150 yards rushing and 3 TDs in a half of a playoff game. As for the 49ers storied history, the RB set franchise records for rushing yards and TDs in a playoff game.

Raheem Mostert didn’t have a stellar collegiate career at Purdue, which is why he went undrafted in the 2015 NFL Draft. In the first 3 years of his college career he had just 43 carries for 230 yards.. TOTAL! He was, however, an excellent kickoff returner averaging just over 25-yards a return with a couple touchdowns.

Yes, the title of this section is cheesy, but it worth noting that the San Francisco 49ers are Raheem Mostert’s 7th…. 7th team since 2015. This includes the Philadelphia Eagles, Miami Dolphins, Baltimore Ravens, Cleveland Browns, New York Jets, Chicago Bears and finally the San Francisco 49ers. One could say that this past weekend’s game was a fluke, but he had a very good season with the 49ers rushing for 772 yards and 8 touchdowns in 2019. After watching Sunday, it’s hard to imagine Mostert getting bounced by so many teams prior to the Niners.

4. Four Teams in One Season

As we mentioned above, #31 has been affiliated with 7 teams since going pro in 2015. That year, 2015, was an adventure for him. He was signed by the Eagles, had a great preseason, but was cut and signed to their practice squad on September 6th. On September 14th, the Miami Dolphins signed him off the Eagles’ practice squad. He returned two kicks for the Dolphins in Week 2, then was cut with the hopes they could sign him to the practice squad. Mostert never cleared waivers and was signed by the Baltimore Ravens on October 14, 2015. He returned 5 kicks for the Ravens for 164 yards in seven games. Like the Dolphins they cut him in hopes of signing him to the practice squad, but he didn’t clear waivers and was picked up by the Cleveland Browns on December 16. He finished the final three games with the Browns returning 12 kicks for 309 yards. That March he signed a one-year tender offer, but was waived by September to make room on the 53-man roster. That is an incredible year!

After two very short stints with the Jets and Bears, Mostert finally made it to the San Francisco 49ers in November of 2016. He didn’t see much action in his first year and was subsequently put on IR in 2017. In 2018, he finally started to make some noise and see more regular playing time. Unfortunately, in a game against the Oakland Raiders during Week 9 he fractured his forearm and found himself back on IR for the second straight season. That same game he scored his first NFL touchdown – a 52-yard run.

6. Thanks to Chip Kelly

Raheem Mostert owes a special thanks to Chip Kelly. It was Kelly, who was the Philadelphia Eagles head coach at the time, who signed Mostert as an undrafted free agent. Kelly later took a job with the 49ers and he was at the helm in 2016 when they brought Raheem in after being bounced around by several teams over the course of a year. When Kelly was fired, Kyle Shanahan took over and kept Mostert on the roster because he excelled on special teams. Needless to say, that worked out.

Probably one of the best stories you’ll read on Raheem Mostert this postseason is from Sports Illustrated. According to SI, Mostert has a pregame routine that resembles a pre-bedtime ritual from a character on the hit HBO series Game of Thrones. While Arya Stark names people she wishes to kill before falling to sleep, Raheem Mostert names the teams that passed on him before every single game. It’s actually quite easy to envision #31 sitting in front of a dark locker with a candle lit repeating, “Eagles, Dolphins, Ravens, Browns, Jets, Bears… Eagles..”. It worked this past weekend.

When Mostert was on the Ravens in 2015, he was the subject of a prank by the coaching staff. At the time, he was called into the office for an unexpected meeting. They told him he was going to be released and he should leave and go to his apartment. A dejected Mostert left the office only to be called back in a couple seconds later to be told he wasn’t going to be released. A week later he was cut.

As a kid in New Smyrna Beach, Florida not only was Raheem Mostert an excellent football player and track and field runner, he was also a great surfer and skater. When he wasn’t on the football field he spent a lot of his time surfing and skating. He got so good at surfing that he was offered a sponsorship by Billabong. He was good enough to be offered contracts to travel and compete in surfing competitions, however he chose to focus on football. Remarkable at the time for a young kid to turn down such a cool opportunity.

It’s been a long, challenging road for Raheem Mostert in the NFL, but like all men who have overcome adversity there is usually a strong woman standing by their side through the tough times. Devon Mostert, his wife, was their to keep pushing him forward every time he got cut. You want to talk about a strong woman, Mrs. Mostert said this in an interview, “It became second nature. Every time he’d get released and picked up by another team, I would be like ‘I’ve got this. Don’t worry. Go to the next city. Worry about the playbook. I’ll handle the apartment and whatever I need to close on the bills.’” Without question, Raheem Mostert would not have had a record-setting day in the NFC Championship without his wife