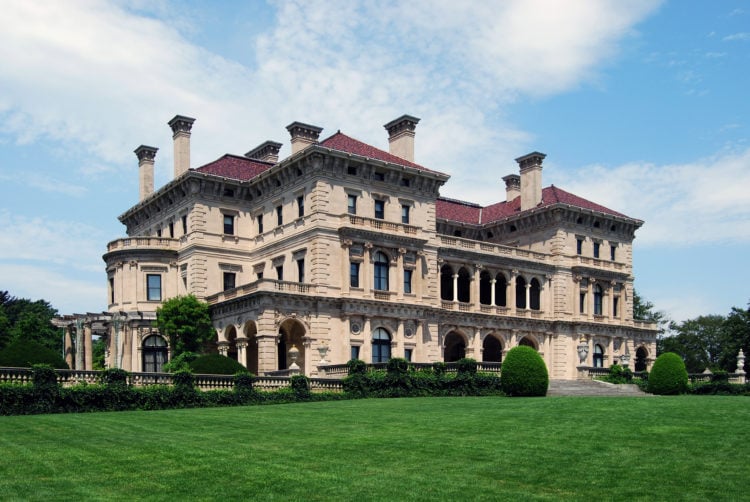 Earlier this year, Bloomberg published its annual list of the richest places in America. The list sees some changes to its 2018 equivalent, but certain things remain the same: like the previous year, most of the wealthiest towns are found in the Northeast, and are populated by residents who share the same basic characteristics… well educated, employed, married, and paying a massive amount for their rent. Let’s take a look at the rundown from 10 to 1:

10. The Village of Indian Hill, CH

Up 5 places on its 2018 entry is The Village of Indian Hill, Ohio. The average household income of residents of “The Village” comes it at a very respectable $336.692, making it one of only three Ohio communities to rank.

With a population of around 9000, Glencoe is one of the most popular (and exclusive) suburbs of Chicago. Only 4.5% of the community’s families fall below the poverty line, and with a mean household income of $339,883, residents can boast of being some of the wealthiest in the entire state of Illinois

Measuring only 1 square mile and with a population just scraping the 6000 mark, Bronxville, New York is one of the tiniest places to make our list. However, while the town may be small, the bank balances of its wealthy inhabitants are most certainly not. With a mean household income of $340,448, Bronxville residents are some of the wealthiest in the country… that said, they need to be. Bronxville is regularly voted one of the most expensive suburbs of any of America’s ten largest cities. With an average house value of $2.33 million, you’ll need to be earning a pretty penny to even think about making this town your home.

Residents of the picturesque town of Darien in Connecticut can boast 7th position among America’s richest towns. Private beaches, yacht clubs and mansions are commonplace for Darien’s wealthy residents, who enjoy an average household income of $341,090. In general, Connecticut is one of the most affluent states across the US, thanks to the area’s high concentration of billionaires.

6th spot is held by the hugely affluent Highland Park in Texas. Its relatively small population of less than 9000 inhabitants manage to pull in an average income of $358,994. Most of the town’s residents are home owners, and the area is replete with bars, restaurants, coffee shops and parks. Although its excellent education system does a fair job in attracting a younger demographic, a significant proportion of the town’s population is made up of wealthy retirees.

5th position goes to Short Hills, New Jersey, which makes our list thanks to an average household income of $367,491. The town itself is a small, 6 square mile area with fewer than 13000 residents. The town has no commercial buildings, apart from a few plant nurseries and a very small grocers, and very little diversity; residents are almost uniformly white, middle class, Christian and educated to post-graduate level.

Just missing out on a place in the top three is Los Altos Hills, which pulls in an average household income of $386,174. The town’s wealth can be attributed to its enviable proximity to Silicon Valley… in fact, the town is considered an enclave for some of the Valley’s richest inhabitants, including Google CEO Sundar Pichai, venture investor John Chambers, and Russian oligarch, Yuri Milner. The community itself has a deliberately “rural” feel, with a complete absence of retail outlets, post offices, libraries, or other common amenities. In addition, each new home is required to have at least a one-acre plot. All of this translates into sky high estates values: if you fancy setting up home here, don’t expect to part with anything less than $2 million.

Cherry Hills Village, Colorado scrapes into the top 3 with an average household income of $394,259. If education is power, and power is wealth, then the reason for the towns ranking is clear: 80.69% of residents have (at a minimum) a 4-year college degree. Compare that to the national average of 21.84%, and it’s pretty clear why this town’s residents are among the country’s richest.

Just a short train hop from Manhattan is our 2nd place winner, Scarsdale. The town moved up a position from last year’s 3rd place thanks to a $30000 increase in the average annual household income. An excellent education system, along with superb shopping and entertainment options, are cited as some of the reasons Scarsdale attracts so many of the country’s wealthy… although its proximity to one of the biggest financial hubs in the world probably helps as well.

Winner of our list with a staggering average household income of $450,698 is the town of Atherton, California. The town ranked number 2 on Forbes list of America’s most expensive zip codes in 2010, but by 2013, it had jumped to poll position; a position it’s occupied ever since. The town offers a semi-rural environment within just a short drive of Silicon Valley, making it the perfect base for billionaires such as Google’s Eric Schmidt and Facebook’s Sheryl Sandberg.

Here’s the top 50 as compiled by Bloomberg 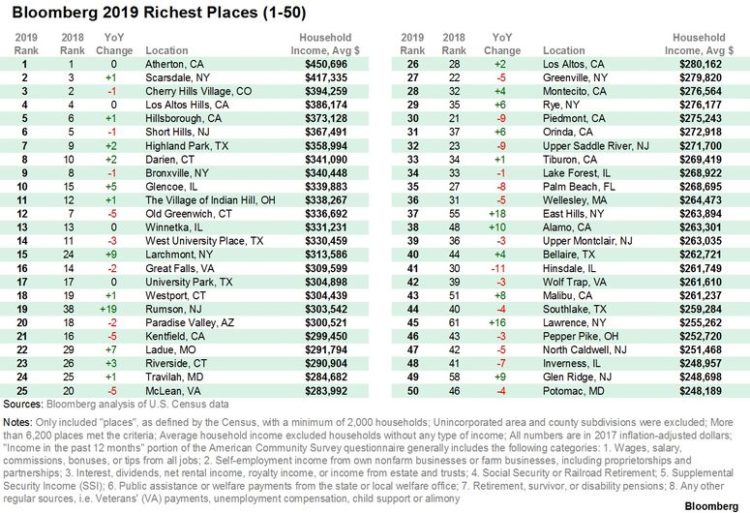