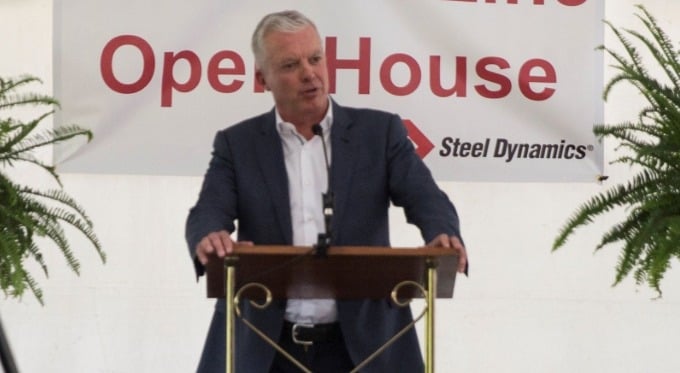 Mark Millett is the person responsible for running Steel Dynamics’s operations as both its CEO and its President. For those who are unfamiliar with its name, said corporation is one of the more notable steel producers in the United States, not least because of its excellent performance. Here are 10 things that you may or may not have known about Mark Millett:

1. Went to University of Surrey

Millett went to the University of Surrey, which is situated in the region of the same name. Primarily, the school is known for its heritage in both science and engineering, though it is by no means limited to those particular fields of study.

2. Wanted to Become a Mechanical Engineer

3. Went Down the Path of Least Resistance

Instead, Millett went down the path of least resistance. As a result, he graduated from school with a degree in metallurgy, which would be the field that is concerned with the properties as well as the production of metals. After which, Millett headed on over to the United States instead of staying in the United Kingdom.

As a child, Millett enjoyed exploring, which is why he spent a great deal of time camping, hiking, and kayaking in his childhood. As an adult, well, it is worth noting that he spent a winter in Aspen skiing while washing dishes to make enough money for him to live on.

5. Got His Start At the Nucor Corporation

Eventually, Millett got his start at the Nucor Corporation, which is a producer of both steel and steel products. There, Millett put his metallurgy degree to excellent use, particularly since he was able to apply his knowledge to real world situations with an adroitness that is rarer than it would be in an ideal world.

The expertise and experience that Millett built up at Nucor Corporation proved to be very useful when he made the choice to co-found Steel Dynamics along with a couple of other ex-Nucor employees named Keith Busse and Richard Teets. Nowadays, Busse is still involved with Steel Dynamics, as shown by the fact that he is its Chairman of the Board.

7. “Seamless Transition” Between Busse and Millett

Previously, Busse was the one running Steel Dynamics as its CEO. However, when he retired in January of 2012, he made a promise to Millett that he wouldn’t be looking over his shoulder on a constant basis so that Millett and the rest of his leadership team would have the chance to make their own way forward. Said promise was somewhat unexpected because Busse was famous for his driven character, but it was nonetheless one of the elements that contributed to the “seamless transition” between the two men’s leadership.

8. Millett Left Nucor Corporation Because He Wanted a Challenge

Each of the three co-founders had their own reason for leaving Nucor Corporation. In Millett’s case, he wanted the challenge of starting up his own business. Furthermore, he wasn’t sure about what kind of opportunities would be available to him if he chose to remain where he was at the time.

When Millett spoke on his leadership style, he described it as being “structured and intentional” when compared to his predecessor’s more “intuitive and reactionary” style. However, Millett was also quick to state that neither style was superior to the other.

10. Has Compared Himself to Augustus

On the same topic, Millett has compared himself to Augustus and his predecessor to Caesar. Essentially, this means that his predecessor was the one who laid the foundation, while he was the one responsible for raising the current structure that is Steel Dynamics on said foundation. After all, Caesar provided Augustus with his name as well as his wealth, which provided his grand-nephew with a huge boost on his way to the very top of Roman society.