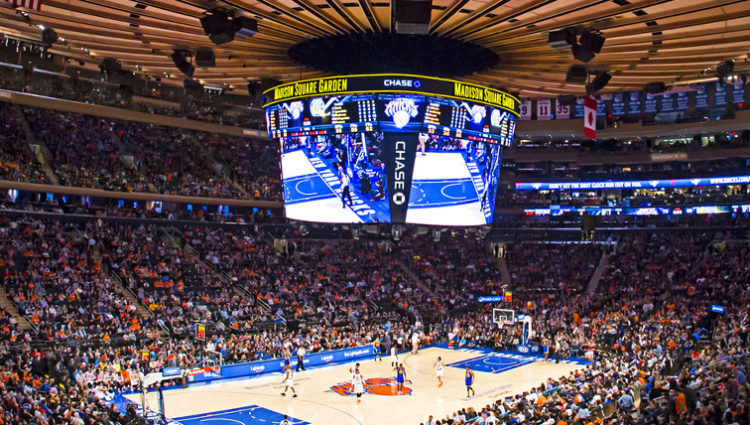 There’s nothing like taking the entire family to watch your favorite NBA team play a home game against its biggest rivals. Of course, it’s easy to want to go, but the reality is most NBA games will cost a ton of money, especially when you take into account drinks, food, and everything else. Out of the many arenas that the NBA uses for games, here are the 10 most expensive ones to see some good basketball in. The costs included are for a family of four with two beers, two sodas, four hotdogs, and parking.

The reigning champs are starting off the list, and they’ve been consistently on the top 10 considering how well the Warriors have been performing in recent years. The total adds up to $441, with majority of the price going to tickets at $95 each. Beers sell for a relatively low $12 for two and sodas sell for $8 for two. The hotdogs at the Oracle will coast $23 for four, which is more than how much parking costs at $18 per vehicle.

Not much more than the previous arena, the Philips Arena will still cost your group a good $493 for a game. Parking may be cheap at $10, but the tickets alone will cost you $111 each. You’ll save a bit on food with beers costing $14 for two, sodas at $5.72 for two, and hotdogs at $19 for four.

Leave it to the Canadians to break the $500 mark; that doesn’t really mean anything. However, Air Canada Centre is certainly making money in NBA given that it’s the only Canadian NBA team, and their fans are some of the most loyal ever. The cost of $506 per game can be broken down to parking at $19.44, hotdogs at $21.74 for four, sodas at $9.98 for two, and beers at $14.58 for two. The tickets themselves aren’t cheap either at $110 apiece.

A basketball game wouldn’t be the same without the beer and hotdogs, so try not to cut the costs by skipping a few things. At $539.68 per family, you’re spending the cost of about an entire week at a mid-level hotel somewhere. That cost includes $120 per ticket, $14.50 for two beers, $6.18 for two sodas, and $24 for four hotdogs. $15 for parking is not bad, but it’s not the best either.

Given that the Barclays Center is the newest and most expensive NBA arena ever built, you’d have to expect the cost to go there to be just as high. You’ll be spending $15.50 for two beers, $8 for two sodas, $23 for four hotdogs, $17 for parking, and at least $127 per game ticket. At least you’d be able to say you’ve been to the trendiest NBA arena there is.

Costing close to $700, a game at the American Airlines Arena will at least give you a great location. It’s right in the heart of downtown Miami, so that’s a big plus. It’s also the downfall because it’s the reason why it costs so much to attend a game there. Beers are not bad at $10.66 for two; sodas are not bad either at $6.66 for two. Even the hotdogs are manageable at $24 for four, but make sure you have at least $35 for parking (which is also hard to come by in the area). In addition, expect to pay $155 per ticket.

Even though Durant is long gone, the Thunders still have enough talent to hike up their ticket sales. In fact, tickets here sell for $170 on average, now just multiply that by four. You can then add the cost of two beers at $10, two sodas at $7.50, and four hotdogs at $16. You’ll save a lot on parking, though, since it’s only $5 per vehicle. Now that’s one of the lowest in the nation.

It might be safe to say that Chicago’s no longer waiting for Derrick Rose to step back into glory, but Chicago has had enough glory in its past to hold over for an extremely long time—maybe even forever. It was the house that Michael Jordan built after all. So you could say that the $726 might be justified for a family of four. The tickets alone start at $165 apiece. Everything else is about average with beers at $15 for two, sodas at $8.40 for two, hotdogs at $23 for four, and parking at $20 per vehicle.

While the Lakers and Clippers share the same arena, we’re taking into consideration average prices for Lakers game instead since it’s the higher cost. Of course there’s an upcharge for being the more popular (and maybe better) team, but it’s not much considering concessions. Beer will cost you $24 for two, sodas at $ 7.20 for two, hotdogs at $23 for four, and parking at only $15. The biggest difference in price will be in the ticket range. An average Lakers game will cost you $180, while a Clippers one will cost you $130.

This should come as no surprise, but there’s a premium added because the arena is right at the heart of Manhattan, and it’s also home to one of the most popular sport teams globally. It’ll be difficult to find good seats here that won’t cost you at least $200 each. That will be the bulk of your costs really, bringing you right at $800 right away. Add in $18 for two beers, $7.20 for two sodas, and $23 for four hotdogs, and you should be all set. You can park your car there for $30 each, but we all know that you won’t because there’s an MTA station right at Madison Square Garden (Penn Station).