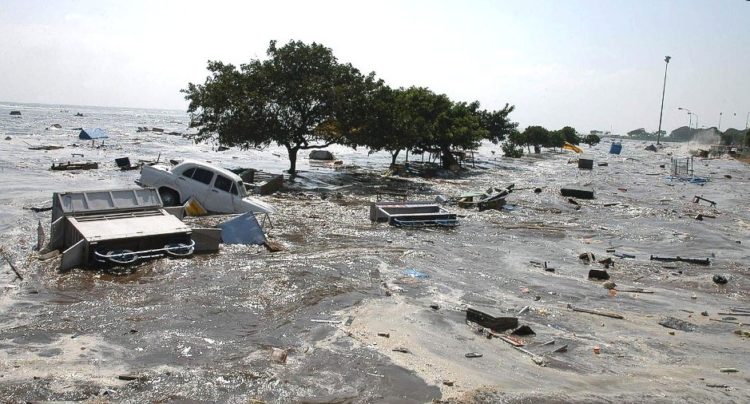 Historically, tsunamis have been one of the most destructive natural disasters to afflict humanity, killing hundreds of thousands of people and destroying entire cities with their power. Who can forget the 2004 Indian Ocean Tsunami, a catastrophe so dramatic that 15 years later, people still remember it as one of the worst days in living memory? Equally, few who were around at the time can fail to remember the devastation wrought by the 2011 Tohoku tsunami, the power of which triggered a nuclear incident that ranks as one of the worst the world has ever witnessed. Here we rank the 20 worst tsunamis of all time in descending order.

On July 21st 365 AD, an undersea earthquake measuring 8 on the Richer scale resulted in a tsunami that devastated large swathes of the coastal areas of Li Egypt, Palestine, Cyprus, Sicily, and the Greek Islands. Although records are vague, the death toll is estimated to have been in the region of 300,000 -500,000.

In 1586, an earthquake measuring 8.2 on the Richter scale resulted in a tsunami that caused major damage to the surrounding area. After Lake Biwa surged over the town of Nagahama, the entire settlement was swept away, leaving nothing but the castle standing. The total number of casualties is believed to have been in the region of 8000.

When an earthquake registering a magnitude of at least 8.3 triggered a tsunami in the Enshunada Sea, the result was catastrophic. Thousands of homes were flooded by the powerful wave, while at least 31000 people were killed.

In 1952, a 9.0 magnitude earthquake (the most powerful in Russian history) triggered a massive tsunami that hit Severo-Kurilsk, Kuril Islands, Sakhalin Oblast, Russian SFSR, and USSR early in the morning of 4th November. Large parts of Sakhalin Oblast and Kamchatka Oblast were demolished while Severo-Kurilsk was all but obliterated. In a tragic turn of events, most residents of Severo-Kurilsk retreated to the hills after the first wave struck, but, after returning to the town when they believed danger had passed, were killed by the 2nd wave. Out of a population of 6000, 2336 died.

More than 2 centuries ago, an estimated 40,000 people died after a Teutonic earthquake triggered a tsunami that swept 120km into the Chinese mainland, destroying huge areas of habitation and agricultural land. As Agu100 reports, records from the time are sketchy, so there’s no evidence to verify the tsunami reached neighboring northwest Luzon, or the Philippines. However, given the scale of the disaster, it’s likely that several surrounding areas would have been hit.

In May 1960, one of the largest earthquakes the world has ever seen hit the coast of Chile. Registering 9.5 on the Richer scale, the earthquake sent 80-foot waves racing across the shoreline of Chile within just 15 minutes of the earthquake hitting; within 15 hours, the waves had reached Hawaii. 7 hours later, they’d reached Japan. After eventually reaching the Philippines, eastern New Zealand, Southeast Asia, and the Aleutian Islands, the cost to the affected regions is believed to have been between $400-800 million, while the death rated exceeded 6000.

On September 28, 2018, one of the largest and most devastating tsunamis in Indonesia’s history struck after a 7.5 magnitude earthquake hit the island of Sulawesi near the Island’s central province, Palu. In a tragic twist of events, the earthquake bought down the power supply across larges swathes of the county; when the news broke that the earthquake had triggered a tsunami, few people got wind of the warning. Ten-foot waves tore across Palu, leading to 866 confirmed deaths and about 2.4 million displaced or injured civilians.

Haiti was already a country crippled by poverty and political unrest by the time the 2010 tsunami bought the once-popular tourist hotspot to its knees. When a 7.0 magnitude earthquake erupted about 10 miles from Port-au-Prince, it triggered a series of tsunamis with waves averaging around 10 feet high. As well as destroying a number of homes, 3 people were killed, while many more were displaced.

In 2004, the world witnessed one of the worst tsunamis in history when an earthquake erupted in the Indian Ocean. 6 years later, another earthquake struck the same fault line, although, fortunately, this time around the results were slightly less devastating. Nevertheless, it still resulted in a tragedy of horrific proportions: after the earthquake (which measured 7.7 on the Richter scale) stuck, it set off a tsunami that ripped through the Mentawai Islands, destroying multitudes of villages, killing 435 people, and displacing as many as 20000.

On February 27, 2010, a richer scale 8.8 earthquake hit Chile. The results were dramatic: as well as causing intense shaking that lasted upwards of three minutes, it set off a tsunami that not only took out a number of coastal towns in the south-central tsunami but swept across the Pacific Ocean to the extent that 53 countries were at risk. In the event, Hawaii, Australia, and Japan were the worst hit, with the total number of deaths across the region later confirmed as 521. Thousands more were displaced or injured as a result of the disaster.

When a 9.0-magnitude megathrust earthquake struck the Tohoku region of Japan on March 11, 2011, few envisioned it would result in the kind of disaster that would cause the Japanese Prime Minister Naoto Kan to name it “the toughest and most difficult crisis for Japan” since the end of World War II. With waves measuring 9.8 feet tall, the tsunami swept along Japan’s northern islands, leaving a trail of devastation in its wake. In addition to destroying entire villages, towns, and cities, the tsunami claimed the lives of 5692 civilians. A further 9522 were reported missing, and 2409 injured. To heap tragedy on tragedy, the earthquake that started the tsunami also caused such violent shaking that the Fukushima Daiichi nuclear power plant began leaking radioactive steam. According to Austrian Geographic, the total cost of the damages amounted to $235 billion.

In 1771 the Yaeyama Great Earthquake set off a devastating tsunami that lay waste to large swathes of Japan. After waves of 262 feet swept through both the Ishigaki and Miyakojima Islands of Japan, the agricultural land was left in ruins and an estimated 12,000 people (roughly two-thirds of the population of the islands) were killed.

In 1793, Japan experienced one if its deadliest natural disasters in recorded history when the eruption of Mount Unzen in western Kyushu set off a megatsunami. The waves of 330 feet left large swathes of the surrounding area destroyed, with an estimated 15030 people losing their life as a result of the disaster.

In a tragedy of epic proportions, the 1896 Meiji-Sanriku Earthquake turned what should have been a day of celebration (being as it was both a Shinto national holiday and the day thousands of soldiers returned from the Sinto Japanese War) into a day of mourning. While the 7.2 magnitude earthquake that hit Meiji-Sanriku was relatively small, the ensuing tsunami that swept in off the coast of Sanriku less than an hour later was anything but. Waves of 125 feet crashed over the area, taking out nearly 9000 houses and causing about 22070 fatalities. Many more were injured, with fractured skulls, broken and missing limbs being the most common complaints. The scale of the disaster reached beyond Japan: in Hawaii, waves of 30 feet caused numerous causalities and the destruction of many homes.

In 1868, a devastating earthquake measuring between 8.5-9 on the Richter scale hit Arica (then part of Peru, now part of Chile). The resulting tsunami all but destroyed the port of Pisco, while its effects could be felt as far away as Hawaii, New Zealand and Japan. In total, the disaster resulted in around 25,674 casualties.

The 2nd largest earthquake to ever hit Japan after the 2011 Tohuku earthquake occurred in 1707. Believed to have measured 8.6 on the Richter scale, the earthquake triggered a devastating tsunami along the southwestern coast of Kochi. With waves of around 32 feet, the tsunami destroyed large areas of the coastline, and is estimated to have killed around 30,000 in total.

Over the course of two days in August 1883, a series of explosions culminated in the eruption of Krakatoa. As Nautilus notes, the sound of the eruption could be heard from as far away as 3000 miles, while the force of the three volcanic eruptions that ensued (one of which was estimated to have been 13 times the strength of the Hiroshima atomic bomb explosion) resulted in the death of almost 40,000 people.

On the morning of All Saints Day in 1755, Lisbon was struck by the largest and most devastating tsunami to ever hit Portugal. The tsunami started with an earthquake measuring 9.0 on the richer scale. Lasting several minutes, the intensity of the earthquake-triggered shockwaves that could be felt all the way through Africa, Greenland, Finland and the Caribbean. In Lisbon, the earthquake opened fissures 15 feet wide in places. In their desperation to escape the devastated city, survivors fled, only to find the seas had receded, exposing large swathes of the sea bed. Less than an hour later, three huge tsunamis swept inland, engulfing huge areas of the coastline off the Atlantic Ocean. In Morocco alone, the death toll reached 10,000, while the total lives lost as a result of both the earthquake and tsunami are believed to have reached as many as 100,000.

The earthquake that triggered the Messina tsunami of 1908 may have lasted for less than a minute, but the effects of the resulting tsunami took the word a lot longer to get over. A few minutes after the earthquake (which measured a 7.1 on the Richter scale) shook the cities of Messina and Reggio in Italy, a series of tsunamis with waves measuring 12 meters high swept across the nearby coastal areas, swallowing up whole towns and killing 70,000 people instantly. In the days that followed, a further 30- 130000 more lives were claimed. Scientists have since speculated that the tsunami was not in fact caused by the earthquake as was originally believed, but was down to an undersea landslide (which itself was a direct result of the earthquake).

In 2004, the most devastating tsunami the world had ever witnessed sent shockwaves around the globe. The tsunami was triggered by an earthquake measuring 9.1 in magnitude (and said by National Geographic to have the energy of 23000 atomic bombs); after the earthquake caused massive Teutonic plate movement, a series of secondary faults broke out, exposing a new oceanic trench as they did. So great was the energy released by the earthquake that the Earth’s rotation is believed to have been thrown off its axis by 2.3cm. The result was 14-foot waves sweeping across 14 countries, killing more than 283,000 people in the process. Such was the magnitude of the catastrophe that it instigated a fundamental shift in the way nations investigate and prepare for natural disasters. While any change is better than none, there’s still much to be done. “Had the world been better prepared, the damage and loss [from the 2004 tsunami] could have been less,” a survivor of the tsunami, Dwayne Meadows, told AccuWeather. “Yet, we still can’t fully predict tsunami waves…more people need to know the warning signs and procedures and be better prepared with supplies and skills; memories fade. Preparedness requires constant vigilance.”