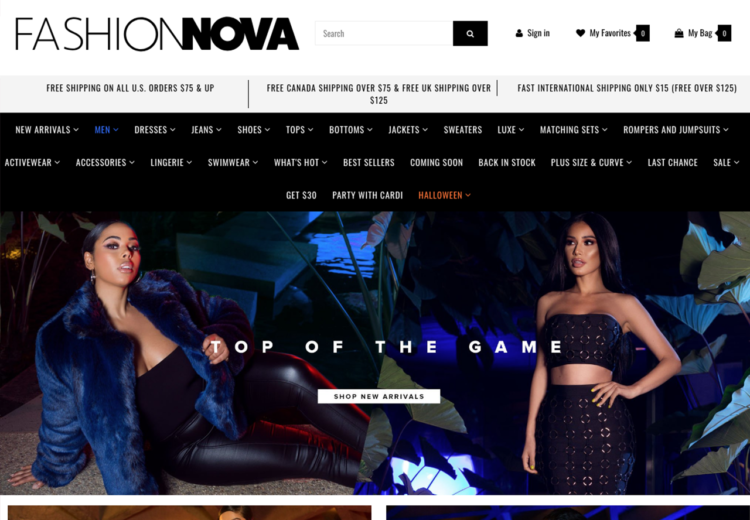 Fashion Nova isn’t one of the famous fashion brands that have been established for decades and decades. Instead, it is a relative new-comer that has experienced meteoric success, as shown by the fact that it was one of the most searched-for fashion brands on Google in 2017. Exact information about Fashion Nova’s performance numbers have not been revealed to the public, but there are comparable companies in comparable positions with revenues that must be measured in the hundreds of millions.

In short, Fashion Nova started out as a brick-and-mortar store, which was helped out by the founder Richard Saghian’s retail experience in that regard. In those times, it found a fair measure of success, as shown by the fact that there were people on Instagram showing off its products even then. Eventually, Saghian realized the potential of an online store for his brand, though it took some time for him to start up such an operation because he wasn’t wholly convinced that he could make it work.

How Did Fashion Nova Become Such a Success?

Regardless, Saghian managed to start up the online store eventually. Promotion-wise, he was helped out by the fact that he had existing customers who could be turned into major marketing assets. After all, some of the people wearing his products were established Instagram successes with sizable subscriber bases, which in turn, meant that they possessed a fair amount of sway over said individuals. Due to this, Saghian was able to start up a pretty capable online marketing campaign by giving his products for free to said individuals. Eventually, Saghian started paying some of the better-known influencers as well, though that wouldn’t come until later.

For those who are unfamiliar with the power of influencers, they can offer either an interesting alternative or an interesting complement to more traditional marketing campaigns. In part, this is because influencers operate on the Internet for the most part, meaning that they can communicate their messages to a remarkable number of potential customers within a very short period of time. However, it should also be noted that influencers possess enormous influence over their subscribers, much more so than random businesses whose marketing tends to cause people to put up their guards on an instinctual level. As a result, this enables influencers to become more persuasive than most forms of marketing as well, particularly since their subscribers are already predisposed to liking the same kind of products and services that they like.

Of course, there are other characteristics that have helped to make Fashion Nova successful as well. For example, it offers clothing for women with hourglass figures, which isn’t necessarily easy to shop for. Furthermore, it is interesting to note that Fashion Nova is very, very good at creating a constant stream of new products, which is made possible by the fact that it is in contact with something like 10,000 suppliers situated in the Los Angeles area. Due to this, Fashion Nova can make a new product in something like 48 hours, thus ensuring that its product selection will always be fresh for those who are interested in them.

Summed up, Fashion Nova has seen incredible success because of its clever use of influencers, though it should be mentioned that it has started conducting more traditional marketing campaigns as well. However, it remains to be seen what will happen next.

Currently, Fashion Nova is expanding its product range, as shown by the fact that it has started selling apparel for men in addition to its existing product lines for women. However, in-depth information about the rest of its plans remains elusive, not least because the company is still privately owned, meaning that there isn’t much incentive for its leadership to disclose information in an effort to keep its shareholders happy with the way that things are going. Regardless, Fashion Nova has gotten off to a very successful start. As a result, so long as its leadership continue to handle things well, it isn’t unreasonable to think that it could turn into another one of those colossi of the fashion industry in a few years, particularly if it continues to expand at the remarkable rates that it has been seeing in recent times.