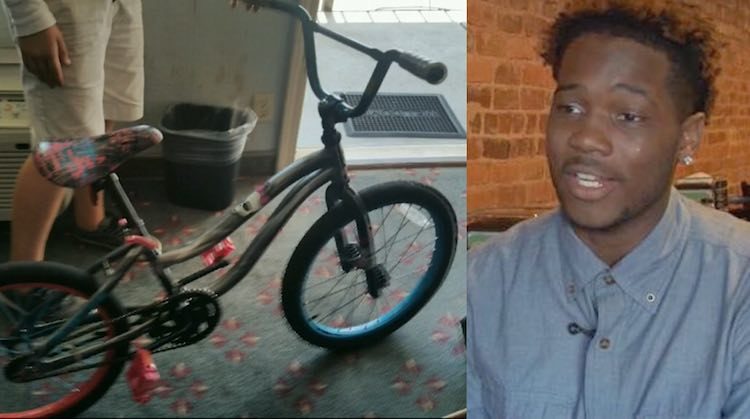 In today’s time, we are flooded with negative news stories and violence. Tensions between Americans are at an all-time high. Most of our daily lives are filled with social issues that seem to have no readily available solution. So when we see a story of humanity shining through the dark, it touches us and creates an interest that spreads throughout the country. Such is the story of Fred Barley: A young homeless man that has a will to improve his life through hard work and determination.

The story of Fred Barley, a young man from Conyers, Georgia, is a story of human compassion and a desire to succeed. The young college student that was attending Gordon University set out on a six-hour bike ride with a few gallons of water, some cereal, and a tent. He had borrowed his little brother’s bike because he did not own one. His girlfriend did not have a car, and it seems as though he had no family capable of supporting him in his endeavor.

His trip was made in hopes of making it to the city where his college was located and finding a job to be able to support himself. Fred had been camping in his tent on the Gordon University grounds for three days and had been searching in town for a job when he encountered two campus police deputies that were stopping in to see why he was camping out. Upon talking to the young man, the two deputies realized that he was an honest young man that was homeless and hungry and was hoping to get a job and go back for his second year of college as a Biology major and has hopes of becoming a doctor someday.

The two deputies felt compassion for this bright student and took him to a local motel where each of them paid for him to stay one night.  Upon hearing the story, the wife of one of the deputies felt extremely compelled to help Fred. She found him in his motel and offered to pay for more time. Fred would have a place to stay once the dorms opened for the semester but that was several weeks away. In the mean time, he was essentially homeless.  Once the word got out, the owner of the Sun Inn agreed to let Fred stay there until the campus was open for the semester.

Not only did he have a place to stay for a few days, but Fred also was able to land a job washing dishes at a Barnesville pizzeria. The owner of DB’s Pizzaria could see his potential and hired him on the spot. News of Fred spread throughout social media, and he captured the attention of thousands of people. A Go Fund Me account had been set up and has collected over one hundred eighty thousand dollars at last count.

Some of the townspeople had come together to purchase a new bike for the young man, and there are a few community leaders trying to work to get him a car. The whole city has come together to not only help Fred, but they have organized events to gather donations for other low-income families that are struggling to buy clothes and school supplies for their children. Fred’s story helped to shine the light on those that are also having a hard time getting the education they need because they can not afford to provide the necessary materials that school requires.

According to Fred, he is overwhelmed and honored to have such a great support system, but more than just the money, he says he treasures the connections and friendships that he has made along the way. He has met people that have become his family, and he is grateful to have been able to interact with them. Many of the families and individuals that have stepped up to help him have taken a personal interest in having a real friendship and spending time with him and making sure that he knows that he is loved and has their support.

Many of the people that have heard his story have been compelled to reach out to him and make a connection. Some feel that he has great potential to do good things in this world. Others felt that they could relate and wanted to give him whatever type of support he needed to get him where he needed to be. Fred attributes his good fortune to God and believes that he was blessed indeed to be able to accomplish a goal that he has struggled so hard to attain.

In a video recently posted by Fred’s girlfriend, he addressed those people that donated or gave words of encouragement as his story unfolded. He thanked them from the bottom of his heart and wanted them to know how much these recent events have meant to him. He promised to use his donation money to help with only necessities and school. He also promised to keep everyone updated on college life and will be posting his grades for everyone to see. He is committed to graduating from medical school and making a life for himself while giving back to the community.

America has no doubt that young Fred Barley is bound for great things in life. He has the whole country behind him and cheering him on. In today’s challenging times this story is inspirational and show the determination and conviction of a young man with a dream to succeed. With his determination and the support of thousands across the nation, there is no doubt that great things will happen for this humble young man.