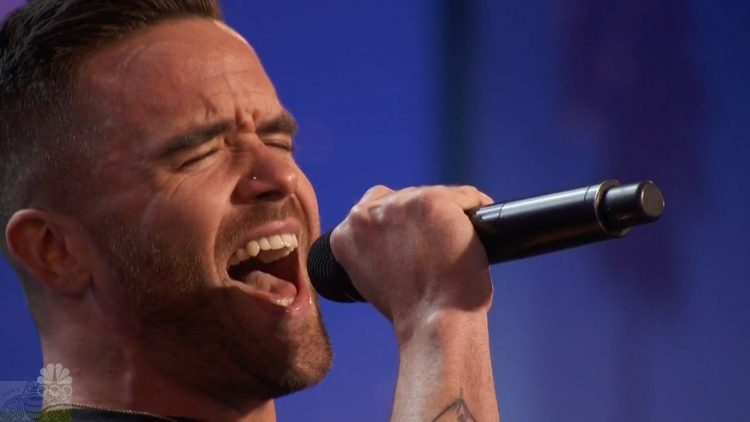 Although you might not recognize the name right away, you will most likely recognize his voice or even the buzz that is surrounding him because of his recent amazing singing performances on America’s Got Talent. He was the underdog initially, but has been blowing away the audience and the judges with his compelling performances. He voice is superior, and it has landed him in the quarterfinals of the show. He was not initially expected to be one of the competitors to move on, in fact, another contestant was the favorite and was expected to be the winner for that leg of the show.

But when Brian Justin Crum did his Radiohead “Creep” performance, the crowd and the judges could not believe how masterful his voice and the performance of the classic song were executed so well. He has become the country’s favorite to win since that performance. Only time will tell if he can best the other performers but one thing is sure, massive audiences will be tuning in to find out what will happen. He has garnered more attention than many of the other competitor in recent years and he has also inspired a generation of young LGBT youth that is looking for a role model to look up to.

Here are 10 things you might not know about him.

1. Brian Justin Crum was part of the cast of WICKED

He toured all over the country playing the part of The Universal Swing. He has an extensive Broadway career as well. He has worked with some of the top names in Broadway and has gained national recognition for his acting skills. His resume is quite extensive and proves that he is as capable with his acting as he is at singing. He has been in numerous musical and theatrical interpretations spanning since 1999. He has played parts in some of the most notable shows that have ever been publicly performed. In many of these productions, he is required to sing and make the show great by using his incredible voice. This is one of the reasons he appears to be doing so well. He is used to giving the audience his all.

2. His mentor is Stephen Schwartz.

He performs with him in Jesus Christ Superstar and Snapshots all over the United States. Performing with his mentor has given him a rare opportunity to refine his acting skills while picking up pointers along the way. Working side by side gave him time to improve and refine techniques along with incorporation the advice of such a seasoned artist.

3. He was part of the cast of Next To Normal when a part was needing to be filled.

The production ended up winning the 2012 Pulitzer Prize for drama. He is quite a capable actor that has proven that he belongs on the stage with the best in the business. Though he has won several awards since the show, he has not been able to replicate its success. He is still a young actor, however, and there will be plenty of time to try for this high honor in the future.

4. He wowed the judges with a cover of Radio Head’s hit song Creep.

This sent him to the quarter-finals instead of another contestant that was the favorite to win. He has also performed other tunes belonging to some of the greatest musical groups of our time such as Queen and has managed to nail it. The crowds love his voice as well as the judges. He has become the favorite to win season 11 of America’s Got Talent.

5. He was bullied as a young man for being gay.

He credits his mother for supporting him throughout his life and getting him through the tough times when he was being harassed. He was eventually able to find a group of people with which he felt comfortable and supported. This support system would become his fellow artists, and he would go on to find his niche and no longer have to face being bullied.

6. He was born in San Diego, California.

This area is notorious for producing some of the most artistically talented individuals in the country. Brian used the extensive creative resources in the area to hone his talents and to help him get noticed in his line of work. This school has been recognized in the past for producing some widely know and award-winning actors and performance art majors.

7. He attended the School Of Creative And Performing Arts.

This school experience served as a springboard for him to focus his already present talent and learn how to focus on improving and perfecting the skills necessary to perform in musicals and other stage presentations. This early start in the right direction has given him a great foundation which has served him well over the years.

8. He was cast to played the part of Galileo Figaro in the Queen theatrical presentation of We Will Rock You.

He performed live with the surviving members of the legendary band. This is one of the reasons he nailed his Queen song when he performed on America’s Got Talent. Performing with the actual band has helped to season his skills and has been one of the highlights of his career.

9. He has won a few best actor awards for some of his roles and has had great critical acclaim.

Many feel that he is a great success in his line of work. No doubt he is just getting started. Most likely there will be many more awards in his future.

10. He is inspiring LGBT youth all over the country with his incredible performances on America’s Got Talent.

There seems to be a lack of positive role models for the community that are popular or in the spotlight right now. When young people see him doing so well, it gives them hope for a brighter future. Many are hoping that he will be able to clinch the victory. Many will be tuning into the next airing to see what he will sing and hopefully see him blow the audience away again.