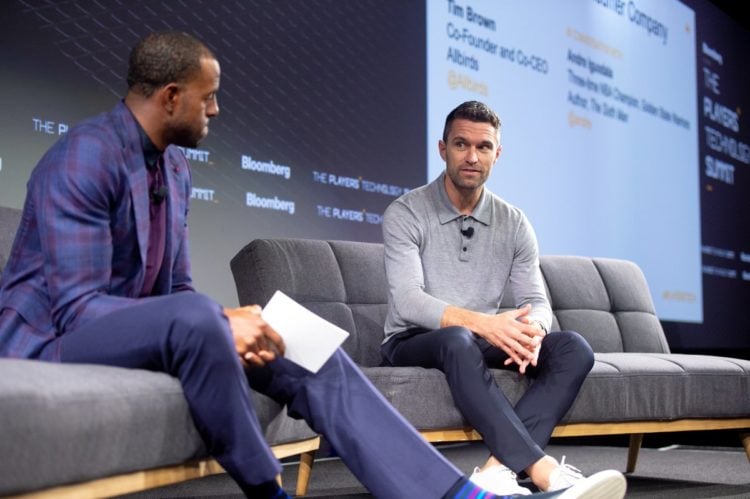 Wool might not be a conventional choice of material for sneakers, but then again, Allbirds isn’t exactly a conventional sneaker maker. For a start, it sources the merino wool that goes into its products directly from New Zealand… a country that doesn’t immediately spring to mind when it comes to sneakers. Secondly, it doesn’t just pay lip service to sustainability: Allbirds is a certified B Corporation that only uses wool that’s been ZQ certified for social and environmental care and animal welfare. And then there’s the fact its founder, Tim Brown, openly admits to not liking shoes. Yep, the man building an empire on sustainable footwear has almost zero interest in what he, you, me, or anyone else puts on their feet. Considering he’s a former professional football player who says he’s never really enjoyed football, it’s not as surprising as it sounds. Find out more as we take a look at ten things you didn’t know about Tim Brown.

1. He was born in England

Prior to launching Allbirds, Brown was best known for his career in New Zealand football. But while he might be a proud New Zealander by nationality, he was actually born in Congleton, England.

2. He began his career at Miramar Rangers

Brown began his football carer at the amateur New Zealand association football club, Miramar Rangers. From there, he moved to the US to play for the University of Cincinnati before joining the Richmond Kickers in the USL Second Division. In 2006, he moved to Australia to play for the Newcastle Jets in the A-League.

3. He was one of seven foundation players of Wellington Phoenix

At the end of the 2006-07 season, Brown was signed as one of seven foundation players of the new A-League franchise, Wellington Phoenix. During his time with the club, he became best known for his signature move of making late runs into the penalty box, where he scored most of his goals. In March 2012, he announced his plan to retire from football in order to pursue a master’s degree in Management.

4. He thinks we need to change our thinking

Allbirds might have done a stellar job in embracing eco-friendly products, but the rest of us have some catching up to do. Speaking to Esquire, Brown explained how there’s a common assumption that however noble and worthy sustainable products are, they’re somehow inferior. It’s why Allbirds has purposely decided not to trade on its sustainability credentials in the way it could, and why Brown believes it’s time for a big shift in our thinking. “If you asked 100 people on the street out there do they care about this issue, 98 out of 100 say they care. And then at the point of the purchase, the thing goes out the window,” he says. “We need to shift the thinking, and I think we’re about to embark on a manufacturing movement where the best products will just be sustainable products because people won’t accept anything less.”

5. The challenges of the wool industry inspired him

Brown might not like football. He might not even like shoes too much. But if there’s one thing he does like, it’s wool. So when he started reading about the challenges faced by the New Zealand wool industry, he got inspired to do something about it. “I read about the challenges of the wool industry in a magazine in New Zealand when I was playing soccer, which kicked off this whole idea,” he’s explained to Viva. “New Zealand used to have 80-odd million sheep in the 80s and now it’s less than 30 million and no one’s growing up dreaming about being a sheep farmer … [it is a] remarkable fiber which has done a pretty poor job of marketing itself.”

Before founding Allbirds in 2015, Brown had already tested the waters with The Wool Runners, a product he launched after developing a world-first woolen fabric for footwear as a member of UKTI’s Sirius Global Entrepreneurship. After a $120K crowdfunding campaign, he launched the product in 2014 in collaboration with fashion brand Theory. It subsequently went on to win Richard Branson’s “Three New Things”​ global innovation competition.

7. He founded Allbirds as a curiosity project

As soon as Brown retired from professional football, he started looking around for his next project. “This business was born as a curiosity project … and was really a reaction to the free shoes I used to get as an athlete — from one of the major sportswear companies that shall not be named — in the belief it was very hard to find simple sneakers,” Brown tells Viva. After deciding to see just how far his idea for a simple sneaker would take him, he teamed up with his long-time friend, Joey Zwillinger, to launch Allbirds.

Since its inception, Allbirds has benefited from the attention of some big-name investors, including A-lister Leonardo DiCaprio. Although the size of DiCaprio’s investment isn’t known, he was happy enough to declare his interests in the company when he told his Twitter followers “Proud to be an investor in @Allbirds, a company dedicated to creating a more sustainable future by developing new materials and serving as a model for the footwear industry.”

Allbirds may only have launched 6 years ago, but it’s grown at a phenomenal rate. Since beginning life with just one product to its name – the Wool Runners, a type of casual sneaker – it now offers a full catalog of footwear and apparel. As its collection has grown, so has its global presence. According to Wikipedia, it now has retail stores in countries including New Zealand, the United States, the Netherlands, France, the United Kingdom, Germany, China, and Japan.

In a true case of opposites attract, Brown believes that one of the most fundamental explanations for Allbird’s success is the different perspectives he and co-founder Joey Zwillinger have. Speaking to Forbes, he explained that if he had to offer budding entrepreneurs just one piece of advice, it would be to build a business with someone different from them. “Partner with someone who has a shared vision but ultimately comes at a problem from a very different perspective. It’s been important for us and quite frankly, makes the whole thing more fun,” he said.