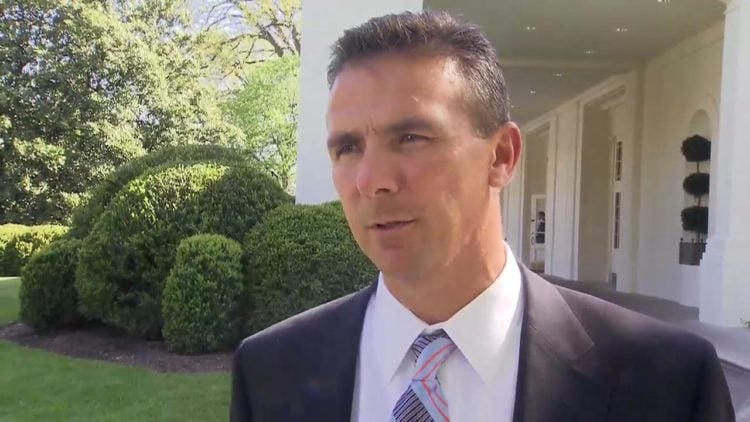 Urban Meyer, for those don’t know him, is the current coach of the Ohio State Buckeyes. But did you have any idea that he’s worth upwards of $20 million? His annual salary was around $5.8 million per year, but this coming season it’s rumored to be up to well over $7 million after a contract renegotiation with Ohio State, which was obviously approved. His initial raise was supposed to be about $800,000, but instead someone on the board, or several someones, seem to think that he was worth quite a bit more. There are a few reasons for this no doubt but the reasons that have been given to the public are a bit different. Whatever the case, this raise will make him one of the highest paid coaches, if not THE highest paid, in any public school in the nation.

One reason might be that he’s a former college player and as such knows the game better than many. He’s served his time as coach with the Florida Gators and was was one of the highest-paid coaches in the SEC at the time. He’s had to earn his way up as a coaching assistant and has taken other various jobs other schools before he was given his job as head coach at Bowling Green State University. It was at Bowling Green though that he managed to create one of the biggest turnarounds in college history. The year before he arrived Bowling Green State had gone 2-9 throughout the season, but in 2001 Meyer managed to turn the team around and ended the season at 8-3, a phenomenal switch that would make any coach look absolutely brilliant. He had a lot of help from his quarterback Josh Harris, who threw for well over a thousand yards, but he was credited as one of the best coaches in college football. The next year he would take the team to a 9-3 record before leaving for the University of Utah.

He’s also worked with such quarterbacks as current Chiefs QB Alex Smith and former Broncos QB Tim Tebow. During his time at Utah Meyer managed to utilize Smith to pass for well over 2,200 yards in 2003 and over 2,900 yards in 2004. This could be yet another reason why he’s been seen as such a valuable coach since he’s credited was part of the reason why Alex Smith was considered a 1st-round pick in the NFL draft in 2005. Any coach that can take a losing program and create something special out of it and help develop a star athlete is typically worthy of some consideration when it comes to salary.

Unfortunately his career hasn’t been completely free of controversy since during his time as the head coach at the University of Florida many of his players faced arrest on charges that ranged from underage drinking to the possession of a concealed weapon, a serious offense that could easily ruin a college career and a life. While it’s almost always from a certain point of view as to how wrong it might be, some athletes were cleared of all charges and allowed to play while others were summarily dismissed and expelled. Meyer was treated accordingly as being the head coach it is up to him to be somewhat responsible for how his players conduct themselves. Yet for all that his net worth has remained largely the same and has perhaps even increased a bit. His ability to win games and coach teams to victory has made him a value to the organizations he works for, and as a result he has become the highest paid coach in his position.

Most recently however he has been paid on administrative leave pending an investigation into the matter of one of his assistant coaches and an assault charge that was filed some time ago. It is believed that Meyer knew about the matter and as such it is now necessary to launch an investigation so as to ascertain the truth. The assistant, Zach Smith, was fired just last week after allegations of abuse towards his ex-wife, Courtney Smith, were brought to light. If anything is set to tarnish his reputation it’s that Meyer has known about certain problems with those on his staff and his players and has somehow managed to sweep some of it under the rug. He’s a stellar coach and has the track record to prove it, so wondering how he gained a net worth of $20 million isn’t hard to do. It’s wondering if that reputation is going to continue if he sees fit to allow such things to happen while he’s still head coach.

Meyer has been golden for any team that he’s coached, but with this pending investigation into how much he knew about his assistant coach’s abuse it could be a sticking point that the media will want to focus on throughout the season. If it blows over it won’t be a surprise, but if it gets blown into something bigger it could put a dent in his reputation.