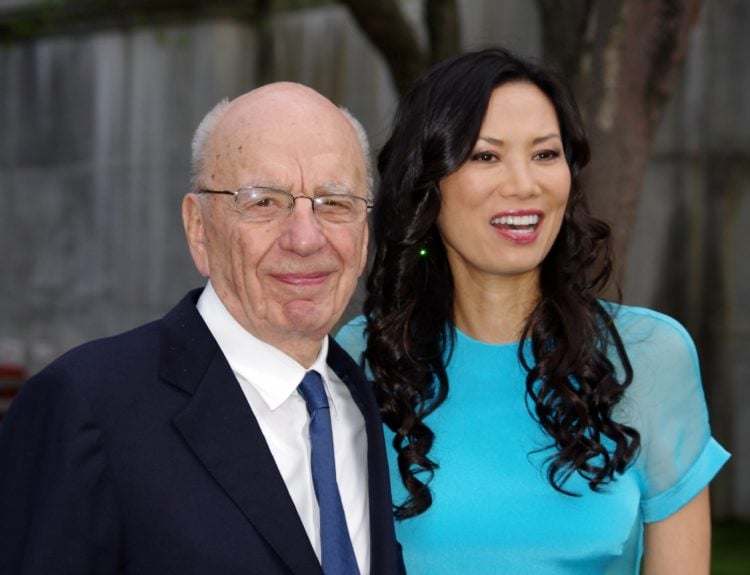 Wendi Deng Murdoch is an American businesswoman who was born in China. Generally speaking, she tends to be best-known because she was married to News Corporation’s Rupert Murdoch for a time, thus explaining the “Murdoch” in her name. However, it is interesting to note that Deng’s name has been coming up in the news in recent times because of concern that she might have been using her relationship with the Kushners to further Chinese interests. Here are 20 tings that you may or may not have known about Wendi Deng Murdoch:

1. Her Initial Name Was Deng Wenge

Deng’s initial name was Deng Wenge, with Deng being the family name and Wenge being the personal name. It wasn’t until later when she was in her teens when she started using Wendi rather than Wenge. It is interesting to note that this change of name reflected the prevailing sentiments of the time. After all, Wenge means something along the lines of “Cultural Revolution,” whereas Wendi was a better fit for the more open, more international mood that followed said period.

2. Her Parents Wanted Her to Be a Doctor

Both of Deng’s parents were engineers. However, her parents wanted her to become a doctor, which would see her enrolling in Guangzhou Medical College for a time. Perhaps unsurprisingly, doctors are held in high regard by Chinese culture, though the shine has faded to some extent in recent times because of high stress as well as numerous reports of the families of patients venting their frustrations on the medical professionals involved in their cases.

3. She Was a Volleyball Player

Soon enough, Deng’s interest in economics led to an interest in business administration, with the result that she went to Yale University from which she would graduate with a MBA. Suffice to say that Yale’s program is very elite and very prestigious, which is perhaps unsurprising when Deng was said by her professors to have been one of the top 1 percent of students at California State University, Northridge.

6. Hosted By a Married Couple in the United States

When she was still a teenager in China, Deng met a married couple by the names of Jake and Joyce Cherry plus their two kids, who were visiting the country because of Jake’s job installing factories. Soon enough, Jake had convinced Joyce that they should sponsor Deng while she studied in the United States, which was followed up by Jake and Deng having an affair with one another even though Jake was 30 years older. The two winded up getting married for about two years and seven months, which ended when Deng told Jake that she couldn’t see him as anything but a father figure.

In those times, Deng is said to have had a bright, enthusiastic personality. As a result, she was said to have been able to become acquainted with everyone else in a room as well as make sure that they were acquainted with her within a very short period of time. On top of that, Deng is sometimes said to have had a streak of mischief in her sense of humor as well, with is supported by an anecdote of her insisting to a friend that they take a shortcut by trespassing in several backyards after a very long and very hilly climb.

8. Came to News Corporation At a Critical Time

Regardless, Deng was able to secure an internship at the News Corporation-owned Star TV in Hong Kong upon graduation, which would lead to a junior executive position. In this, she was helped by her timing. Simply put, News Corporation was preparing to enter the Chinese market, which could be considered the next frontier in the corporation’s chosen line of business in those times. As such, Deng’s firsthand knowledge of China put her in an excellent position to rise through the ranks.

9. Met Rupert Murdoch Because of Her Firsthand Knowledge of China

Speaking of which, it was Deng’s firsthand knowledge of China that resulted in her becoming acquainted with Rupert Murdoch as well. In short, what happened was that Murdoch was headed to China, meaning that he wanted the then CEO of Star TV to find someone to accompany him, presumably because he wanted a source of expertise and experience who could provide him with useful assistance on his trip. When Murdoch met the staff in Hong Kong, Deng managed to impress him with an intelligent question, with the result that she became the natural choice to accompany him on the trip.

10. Got Married to Murdoch Soon After His Divorce From His Previous Wife

Soon enough, Deng and Murdoch were married to one another on Murdoch’s yacht in 1999. This was less than three weeks after Murdoch had finalized his divorce from his second wife, the then Anna Murdoch, which was a process that wasn’t as amicable as it has sometimes been made out to be. Supposedly, Anna had wanted to save her marriage with Murdoch. Something that Murdoch doesn’t seem to have been interested in, which Anna believes can be attributed to Murdoch having already set his eye on someone else.

In 2011, Deng received a fair amount of attention because she counter-attacked an activist named Jonathan May-Bowles, who had attempted to hit Murdoch in the face with a plate that had been covered with a generous helping of shaving foam. For context, Murdoch was seated before a committee of the British Parliament in order to give testimony about the News International phone hacking scandal, which was huge at the time because it turned out that a number of British newspapers published by the News Corporation-owned News International were getting their stories through bribes, inappropriate influence, and straight-up phone hacking.

12. Had a Friendship with Tony Blair

There was a time when Deng had a friendship with Tony Blair, who was the Prime Minister of the United Kingdom from 1997 and 2007 but has since become a political pariah. In fact, Blair is the godfather to Grace Murdoch, who is one of Deng’s two children with Murdoch.

13. Played a Part in the Rupture of the Friendship Between Murdoch and Tony Blair

With that said, it seems that Deng’s friendship with Blair is what caused the rupture of Murdoch’s friendship with Blair as well as Murdoch’s marriage with Deng. To be exact, there were supposedly multiple incidents in which Blair met Deng without Murdoch’s knowledge, which resulted in suspicions that the two were having an affair. Whether true or not, it seems pretty safe to say that Murdoch believed in the claim, which actually prompted something of a clash between the allies of Blair and the allies of Murdoch at the time.

There was a time when Murdoch advised MySpace on MySpace’s Chinese operations. However, this came to a conclusion in June of 2011, which was when MySpace was sold to Specific Media. In any case, MySpace is something of a joke in these times, but this is still significant because there was a time when it was the leading social media site that could be found out there. Fortunately or unfortunately, a lot of the very cringey but very nostalgic user content posted on Myspace is no longer available because it lost close to 13 years’ worth of data because of a botched server migration in 2019.

Deng is someone with an interest in art. For proof, consider the fact that she is one of the most notable investors in Artsy, which is an online platform that exists for the purpose of letting interested individuals discover art as well as collect art. Said platform has managed to raise millions and millions of dollars in funding from Deng as well as a number of other investors.

16. Has Been Known to Invest in Other Tech Startups

Artsy isn’t the sole tech startup that Deng has shown an interest in. Some of her best-known investments in this field include both Uber and Snapchat. Moreover, Deng has invested in Warby Parker as well, which is an online retailer of prescription glasses and sunglasses that operate in the United States.

It is interesting to note that Murdoch is involved with the Asia Society, which is a non-profit that exists for the purpose of informing people about Asian culture, Asian politics, Asian businesses, and various other matters. Primarily, the non-profit carries out its task by holding exhibitions as well as other educational programs. In particular, it should be mentioned that some topics receive more focus than others, with examples including health, human rights, and the position of women in various Asian societies.

Besides the Asia Society, Murdoch is also involved with Panthera. Based on the name, interested individuals should have no problems guessing that this non-profit is concerned with the big cats in some way, seeing as how Panthera is the name of their genus. In any case, the non-profit called Panthera is focused on conservation efforts for not just all of the big cats but also other species that are sometimes called big cats but don’t fall under the stricter definition of the term.

19. Has Friendship with Jared Kushner and Ivanka Trump

It has been said that Murdoch was the one who set up Ivanka Trump with her husband Jared Kushner, so it is perhaps unsurprising that Deng has a friendship with them. In recent times, this friendship has caused Deng to be accused of exerting influence in order to further Chinese interests.

20. Has Been Accused of Attempting to Use Friendship to Further Chinese Interests

To be exact, what happened is that Deng lobbied for a construction project in Washington, D.C. that would have received funding from the Chinese government. The construction project was a Chinese garden, which would’ve included a tall tower that would’ve been situated less than five miles from both the Capitol and the White House. Apparently, U.S. intelligence was concerned that the tower could have been used for surveillance, with the result that the construction project fell through. This isn’t the first time that Deng’s name has been mentioned in connection with security concerns, since when it came out that she may or may not have been having an affair with Tony Blair, U.K. intelligence is said to have contacted U.S. intelligence to ask if it should be concerned about what was going on.