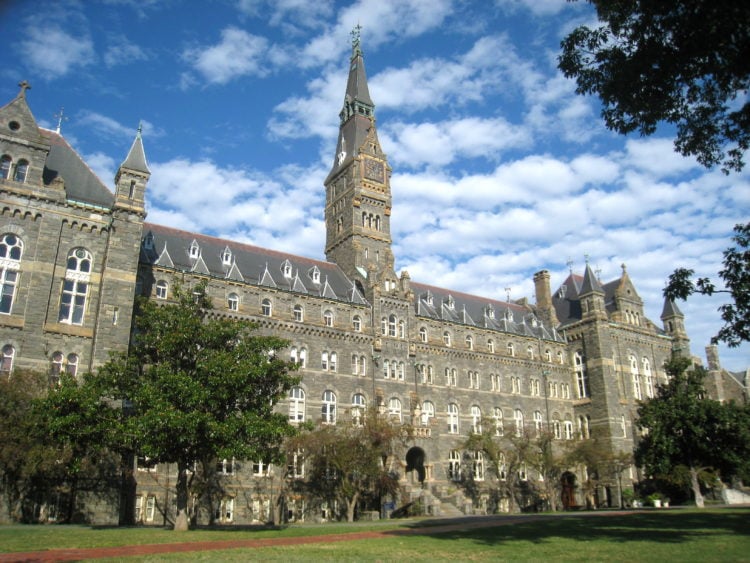 Georgetown University is a prestigious institution of higher education located in the Georgetown sector of Washington D.C. The requirements for admission into the school are stringent, making it difficult to get into as a freshman. only 17 percent of applicants are accepted into Georgetown University. The graduation rate is high estimated at 95 percent, showing that the majority of students are serious about completing their studies and many who of the average 7,112 who attend and do not complete encounter challenging life circumstances which prevent them from finishing. Some of the most notable people in the business world have attended Georgetown University and here are 20 of the most successful.

Joseph R. Baczko graduated from Georgetown’s School of Foreign Service in 1967. He continued on with his education, earning an MBA from Harvard University. He established a highly successful career in the business world and became the CEO of the Ma Factor Europe corporation. He also founded Toys R Us International and became the Chief Operating Officer and president of Blockbuster Entertainment. In addition to this, he served as the Dean of Pace University’s Lubin School of Business 1967 SFS President and Chief Operating Officer of Blockbuster Entertainment, 1991–93; founder and president of Toys “R” Us International, 1983–1990; CEO of Max Factor-Europe, 1979–83; Dean of the Lubin School of Business of Pace University.

Gary Perlin attended the Georgetown University School of Foreign Service and majored in International Affairs. He earned his undergraduate degree from the program in 1972, then continued on to attend the London School of Economics, earning an MSc in Economics and an MPA from the Woodrow Wilson School of public and International Affairs at Princeton University. His wife Amy is a rabbi, and Mr. Perlin went on to become the vice president and chief financial officer of the World Bank.

Ted attended Georgetown University and earned his degree in American studies, graduating with his bachelor’s degree in 1977. He went on to work for Wang Laboratories where he worked his way up to corporate communications manager. He went on to work as a marketing executive for the Harris Corporation. He established his own business called LIST, which was a software and tech magazine. He sold the company and established several more magazines, achieving great success with each.He is currently the CEO of Monumental Sports and Entertainment as well as the Co Chairman. He is also the owner of the WNBA Washington Mystics, the NHL Washington Capitals, the NBA Washington Wizards and he owns the Verizon Center Baltimore Washington Ticketmaster franchise.

Ralph V. Whitworth is a notable Georgetown University graduate who earned his doctorate of juris prudence in 1985 from the University’s law school. he went on to become the founder of Relational Investors which is a private investment management company. He also served as a member of the Investment Committee as well as chairman of Waste Management, Inc and also Apria Healthcare Group, Inc. The assets managed for the company that he founded are valued at $6 billion.

Paul Pelosi attended Georgetown University and graduated with his degree in 1962. He is the husband of speaker of the House Nancy Pelosi. Paul owns Financial Leasing Services, Inc. He also owns the Sacramento mountain Lions as well as the United Football League. He’s a successful business man who is married to a highly successful politician. Three of Mr. and Mrs. Pelosi’s children attended and graduated from Georgetown University.

Thomas Leavey is an important figure in the business history of America. He graduated with his degree from Georgetown University in 1923. He is the founder of Farmers Insurance Company which has been in business from 1952 to the present. He and his wife Dorothy founded the Thomas and Dorothy Leavey Foundation. He was a philanthropist who enjoyed sharing his financial success with others who are in need of assistance.

Charles Cawley attended Georgetown University and earned his bachelor’s degree in 1962. He established a successful career in the banking industry. He began his career at Maryland Bank National Association, also known as MBNA Corporation, in the consumer credit division. He is the co-founder of the credit card company and he and his partner built it up to become the largest of its kind in the nation, as a private company. he served as chairman and CEO of the company.

Charles Donnelly attended Georgetown University, graduating with his degree in 1896. He became an attorney at law and established a successful law practice. He went on to become the president of the northern Pacific Railway from 1920 up until the time of his death in 1939.

Ivanka Trump attended Georgetown University and earned her degree from the prestigious institution. She is the daughter of President Donald Trump. Ms. Trump is known for her outstanding executive leadership abilities and she served as the Executive vice president of the Trump organization. She is hailed as a successful business woman and currently assists her father as an adviser at the White House. She is a public speaker as well, speaking about women and entrepreneurship and public policy.

Michael Chasen graduated from Georgetown University earning his MBA degree in 1995. He went on to become the CEO of PrecisionHawk Inc, which position he currently holds. He co-founded Blackboard Inc., in 1999 and he served as the CEO until 2012. He has an extensive history in the business world also serving as the CEO and president of SocialRadar, which is also co-founded in 2013. He has also served in the capacity of consultant for several major companies and corporations. In 2010, he was voted as one of the 15 most powerful CEO’s under 40 in America.

Rolando Gonzales-Bunster attended Georgetown University and graduated in 1968. He has since gone on to establish a very successful career in business and he also serves on the University’s board as a trustee as well as serving as the director of the Latin American Board and on the William, Hillary and Chelsea Clinton Foundation board. He is the founder of the Walkabout Foundation and is responsible for the distribution of 21,000 wheelchairs to those who were in need of them. in addition, he served as the special assistant to the founder of the Charles Bluhdorn company and he also went on to become the Vice president of International operations at Gulf & Western, and he founded his own business in 1988 and served as the Chairman and CEO of InterEnergy holdings.

Denise Bode graduated from Georgetown University in 1984. She developed her expertise in policy and has a career that has spanned over thirty years in analysis of regulatory lax ,energy, tax, food, environment, trade and agricultural sectors with a focus on strategic development and planning for her clients. She became the CEO of the American Wind Energy Association in 1997. She founded the American Clean Skies Foundation and serves as the CEO of the nonprofit with its focus on the education of the public and advocacy for the use of natural gas along with wind and solar energy.

Charles Bunch is a 1971 graduate of Georgetown University. He has built a successful career in executive leadership in the finance sector of the petroleum industry. He started out as a director at HJ Heinz company, then moved on to become the chairman of the Federal Reserve Bank of Cleveland as well as the board of trustees for the university of Pittsburgh. He served in general management, planning and marketing for a number of years. he joined PPG Industries, Inc where he spent over 35 years. He became the CEO of PPG Industries and served in the position until his retirement.

Charles Prince graduated from Georgetown University with his master of Laws degree in 1983. He has held several executive level positions throughout his career. He served as Principle of the Albright Stonebridge Group, as well as the COO of Travelers Group Inc. He started his career as an attorney for US Steel Corporation in the mid seventies and in 1979, he joined the Commercial Credit Company in several management positions. He is currently the Senior Counselor for Albright CApital management in Washington DC as well as the CEO of Citibank Europe.

Mark Weinberger graduated from Georgetown University in 1991. he went on to co-found Washington Counsel, PC. He has also served in several United States Government positions as well as providing advice to Congress and the President on aspects of the Social Security system. He is currently the CEO of Ernst and Young in addition to serving as Global Chairman.

Jim Kimsey was another notable alumni of Georgetown University. He graduated from the school in the class of 1958. Mr. Kimsey went on to found America Online, also known as AOL. He served as the CEO and chairman for a number of years. AOL was one of the first major internet providers and Mr. Kimsey has made significant contributions to internet technology and advanced communications.

William Doyle attended Georgetown University and graduated with the class of 1972. He went on to become the chief operating officer of the Saskatchewan company, the Potash Corporation. He served in the position from 1999 through 2015. He also became Georgetown University’s Chairman of the Board of Directors.

Mary Callahan Erdoes attended Georgetown University and graduated with the class of 1989. She joined JP Morgan Asset Management and she was appointed as the CEO in 2009 and still occupies the position. She recently helped to establish the first asset management business of this type in Shanghai, China. She heads the $2.1 trillion company at the helm of the Asset and Wealth Management division.

Jeffrey Greenberg was a member of the graduating class of 1976 at Georgetown University’s School of Law, where he earned his JD degree. He started out his career in 1976 with Marsh & McLennan Companies as their commercial aviation and aerospace insurance group division as a broker and manager. He worked his way up in the company and in 1996, he was promoted to Vice President of the domestic brokerage insurance group. He was named the CEO of the the company in 1999 and in 2000, he was named as the chairman. Mr. Greenberg was named by Forbes as one of the most powerful people in American for two consecutive years in 2000 and then again in 2001. He has served on multiple advisory boards throughout his career.