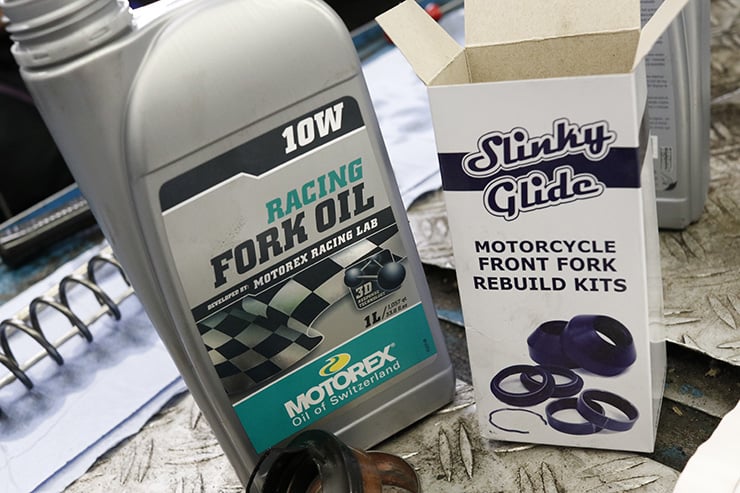 Motorcycles require regular maintenance on all of the systems. If you’re new to riding or have previously depended on someone else to perform routine maintenance tasks, here is something you need to be aware of. Your forks also need an oil change if they are conventional front forks. The rules are different for an upside-down style, a BMW Tele-lever fork, or USD. Here is everything that you need to know about motorcycle fork oil.

What is fork oil?

Fork oil is a lubricant that is used inside the tubes of conventional front forks on a motorcycle. Each motorcycle brand has its own specifications for the grade of oil to be used in a particular model, as well as the amount. Each leg of the fork needs to have the oil changed or replaced periodically.

Eat Sleep Ride, if you don’t know what motorcycle fork oil is, you shouldn’t feel bad, because there are a lot of riders who don’t know either. It’s something that bike mechanics are more familiar with because it has to do with the way that the front end of a bike works. Most conventional bikes are equipped with front forks that consist of a spring and oil inside the tubes. The forks are made to move up and down when you hit bumps and the spring acts as a shock absorber for the front. The oil moves around inside the tubes and around the spring to keep things lubricated and functioning smoothly.

Motorcycle explains that your suspension is an important system, albeit one that few stop to think about. When it doesn’t’ even show up as an important topic in your bike’s manual why would it be essential? Most riders just shine it on and forget about it, but, these are riders with street bikes. Dirt bikers are another story. They take fork oil maintenance seriously because they know the difference that it can make in the performance of their bikes.

Why you should change your fork oil

Motorcycle fork oil isn’t a lot different than other kinds of oils. AS it ages, its efficacy diminishes over time. For dirt bikes, it gets more heavy workouts. Motocross racers take their bikes over the whoops, their forks take a series of continuous impacts. This is in addition to the heat, the shearing, and the contamination from dirt and other particles that get caked into the forks. If you ask these guys, they’ll tell you that it’s not a matter of if you should or not, it’s a matter of how often is enough.

Is there a difference between cruisers and dirt bikes?

The kind of riding that you do has a major impact on the frequency you need for changing fork oil. Bikes that travel fast or are subject to the pounding of a track need to have more frequent oil changes. The tubes and springs of the forks are constantly moving up and down, sometimes violently, and those that travel on dirt tracks are constantly subject to contamination. What this means is that dirt bikes will need to have the fork oil changed with a regular frequency.

Hazards of not changing fork oil

The up and down movement of the tubes via the springs in the forks subjects your suspension to metal shavings. These shavings are moving around in the oil and causing friction on the inside of the tube which leads to wear and tear on the spring as well as the forks. This isn’t even accounting for the dirt and other debris that will work through the fork seal and find its way into the oil. In cooler weather, the oil gets thicker to the consistency of maple syrup. This impacts the performance of the bike in terms of how well it handles and corners. Cooler weather results in abrupt and minimal fork action until it warms and thins. The oil that is contaminated can thicken into a sludge that can also negatively impact suspension performance.

Are there any substitutes for fork oil?

According to MTBR, you should avoid the temptation to substitute motorcycle fork oil for anything else. They explain that fork oil is specially formulated to work together with the various components of the fork. These moving parts are subject to constant impacts and harsh, abrupt movements. Other types of oils have a high likelihood of cavitation and foaming. Therefore, it isn’t recommended to use anything other than dedicated motorcycle fork oil. It’s not hard to find. It can be picked up in a variety of automotive and bike shops.

Motorcycle fork oil is something that most dirt bikers and motocross racers are intimately acquainted with. Replacing the oil in their forks is like a religious ritual. This is because they understand that it has a significant effect on the motorcycle’s performance. It also impacts the health of the front suspension. Many street bike riders don’t know what fork oil is. Many motorcyclists are unaware that this is a maintenance task that should be performed per the number of miles and type of riding you do. It’s not indicated in most bike manuals. Because of this omission, they have no good reason to think it’s necessary. It’s not as essential with street bikes unless you put many hard miles on your bike. It should still be done to enhance the handling and performance of the bike. The frequency doesn’t need to be as often. Keeping the springs in good shape and clean oil in the forks is a worthy goal. It would be nice if motorcycle manufacturers would start including this in the maintenance section of their guides. You might get by with not changing the oil in your forks, but you won’t get the best possible performance unless you do.