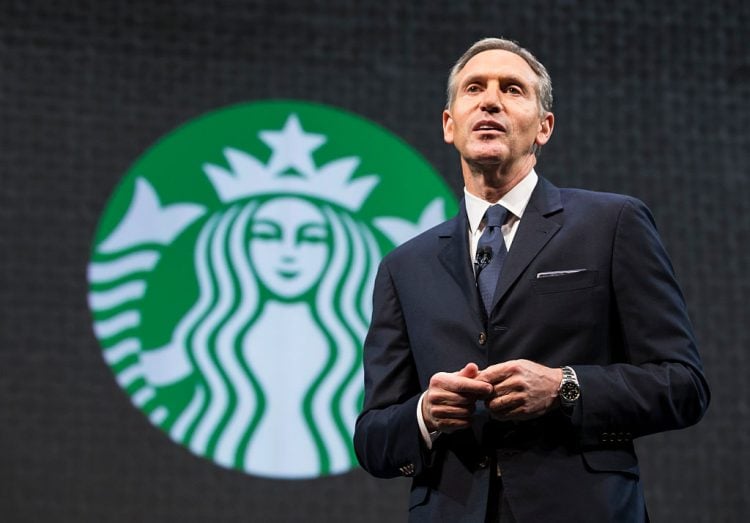 Howard Schultz is the humanitarian CEO of Starbucks, the famous $82 billion company for coffee lovers. The business world again took notice of his company as the announcement was made that its United States employees would receive a raise beginning on October 3, 2016. Schultz has a commitment to his employees and to his company that is propelled by his past. He is open about his family’s poverty and the ways that growing up with adversity has infused him with business values and an awareness of social issues.

Schultz was born in 1953 and grew up in the Bayview Projects in New York. He attended elementary school at P.S. 272. His father was a truck driver for a diaper delivery service. His family was left without income when his father broke his ankle at work. Schultz was just seven. He attended Canarsie High School, and was the football quarterback. This led to a football scholarship at Northern Michigan University.

He worked at several jobs after graduation, including the housewares business called Hammarplast. Starbucks ordered drip coffee makers from Hammarplast, and the order was quite large, and it caught Schultz’s attention. He was curious, and went to Seattle to meet the Starbucks owners. One year later, Schultz started selling pounds of Starbucks coffee. Schultz’s exceptional life journey had just begun.

Here are 10 things you didn’t know about Howard Schultz.

1. He has always viewed the American Dream as a reservoir.

He was 10 years old, and growing up in Brooklyn when his mother took him to a political rally for John F. Kennedy. His mother held his hand, and they walked for blocks. He says that his mother believed in the American dream, and that he is the proof that the American dream is still possible. He is still able to feel his mother’s hands gripped on his, as she listened to Kennedy’s optimistic view of the American Dream.

In 2016, he views the American Dream as a depleted reservoir, which has been drained due to a lack of leadership, dysfunction, void of truth in leadership leading to lack of confidence in elected officials, and attitudes of cynicism and indifference. He says that the American reservoir of hope has lessened confidence in American institutions, and needs to be replenished with values, work ethic and the spirit of the American people. He charges the American people with the responsibility of filling the reservoir with love, optimism, possibility, unity, inclusion, compassion and the decision to do everything possible to reclaim the American dream.

2. He asks people to “share their blanket” with others.

He had heard a story from his rabbi, which told of the trip taken by so many Jews during the Holocaust. It was the train trip to the internment camps, and then, upon arrival, the gift of one blanket for every six people. His rabbi said that each person who received a blanket had to choose whether or not they were going to share their blanket with the others who did not have one. Ultimately, the majority chose to share their blanket, so that others could have the opportunity for warmth. He still believes in the power of people sharing their resources with each other.

He was inspired to create a meeting place modeled after those he had experienced in Italy in 1982. He noticed that excellent espresso was part of the draw, but the other was that these coffee bars were public meeting places and everyone gathered there. Italy had 200,000 of them at the time he visited. He was the director of marketing and operations at Starbucks then, and he wanted the company owners to serve coffee, too. But, they resisted. So, he quit. His own business was so successful that he bought Starbucks one year later at a price of $3.8 million. His “company with soul” provided all employees working 20 hours per week with comprehensive health coverage and a stock-option plan.

4. Schultz believes that Starbucks stores have become “a third place” in American society.

He describes this as a safe haven for people where they can socialize outside of work and home; the other two primary places in their lives. He says that coffee has a mystique about it that is very romantic. He likens the growing process and artistry of blending, brewing and serving fine coffee as a parallel to all of the romantic rituals involved in enjoying fine wine.

He says that on a private level, he will continue to be aware of politics. As Starbucks CEO, he will continue the company’s philanthropic efforts and social responsibility in communities. He and his wife, Sheri are co-founders of the Schultz Family Foundation, which works to connect veterans and youth with opportunities for jobs. They are dedicated to healing rifts in American society. Schultz believes in businesses which focus on social impact. He also believes that hatred, vitriol, and division can be healed by servant leadership. He believes that Americans need honesty, civility, and authenticity in dealings regardless of particular political persuasions.

6. He believes that young people should never allow anyone to tell them that they are aiming too high.

He grew up in the Brooklyn projects in the 1950s and 60s. His father was a blue collar worker who never made more than $20 thousand a year. He did not have health insurance or workers’ compensation for job injuries. Neither parent was educated. As a result, Schultz worked very hard to succeed because he wanted to build a workplace which his father never had the chance to experience. Schultz feels that a combination of luck and hard work eventually placed him where he is, creating work where people are respected. He said it is possible to achieve dreams. He encourages young people to hold onto their dreams, and believe that they can come true.

7. He loves Starbucks as much as he loves his own family.

He uses the word love a lot when he speaks about business. There is nothing he would not do to preserve and enhance the company and his family. He believes that every business should make a profit, but he also believes that only making money is a very shallow goal. His views of love and humanity is that the company should stand for attracting and retaining great people within a value system where the company can do great things for its employees and the people they serve. As government entities are losing their financial ability to provide for citizens, private companies must step in and provide ways to give to communities and the world.

8. He says that the key word he uses for business is “love”.

In 2011, he was the keynote speaker at the Daniels College of Business at the University of Denver, Colorado, for the Voices of Experience series. He was on a speaking tour, and Denver was the seventh city in eight days, and had one of the largest crowds in attendance. He began his speech by telling the audience that he feels a great and deep feeling of responsibility for the hundreds of thousands of people who wear the Starbucks green apron. He was acknowledging the suffering of the cataclysmic financial crisis suffered by the company in 2007 and 2008.

9. His ultimate motivation is that he is still a kid from Brooklyn, with dreams and aspirations.

He says that he still has things he wants to achieve with the company. He still believes that the company’s responsibility to its workers and the people it serves will be even greater in the future. He says he grew up on the other side of the tracks. If people could see how he lived, he says they would never believe that he could eventually become as successful as he has.

2. Change your mindset. Think about what you can achieve, rather than what people tell you, you cannot.

3. Have a heart. Integrate social consciousness into your company.

4. Celebrate mistakes. Learn from the mistakes you make, and don’t be afraid to take risks.

7. Have strong values. Consumers perform cultural audits of brands to see what they should support. Give back to the communities which support you.

8. Do what you love. Do the things that you are passionate about. Fight to the death for values.

9. Exceed expectations. Everyone wants the same things; respect, appreciation, dignity as workers and paying customers, and the ability to purchase things of value for the money spent.

10. Stand for something important. Not every decision is an economic one. Invest in people. Embrace diversity and embrace people of all kinds.