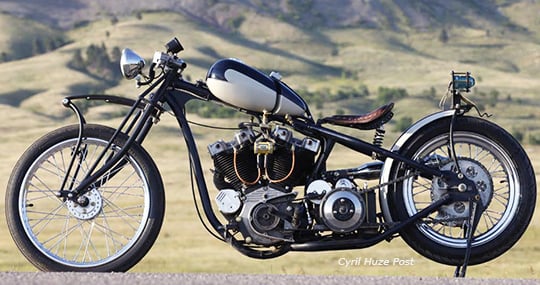 The Harley-Davidson Motorcycle Company had been in business for fifty-four years when they designed, manufactured, and released the bike model that would change the face of riding forever. The new model looked similar to other models they offered, but this one was a bit faster, and it would prove to be preferred by countless people in the years to come. We’re talking about the 1957 Sportster XL Ironhead, which was the very first Sportster, the granddaddy of them all, you might say.  In fact we’ve rated this among the very best Sportsters in Harley Davidson history.

The XL Sportster, as it was originally called, seemed to be the answer motorcycle-lovers had been looking for. With a V-2 four-stroke engine that boasted forty horses of power, many simply couldn’t wait to get their rear ends on one, and the retail price, brand new, wasn’t too bad at $1100. Well, little did the world know that Harley had unleashed a bike on the world that was destined to not only be around for a long time to come, but would also give the freedom to ride to anyone who wanted to; the legend had unknowingly given us another.

Origin of the Sportster

Even though Harley-Davidson had technically been in business since 1903, the market for leisure motorcycle riding didn’t become too popular until the British made it ‘cool’ in the early fifties. At the time, Harley was making bikes that were just a bit too heavy for street riding. Knowing they needed to be competitive in the bike market, they developed the K-Model, which was in production from 1952 to 1956. The bike’s sales were fair enough, but in 1957 they decided to attach their new overhead-valve motor onto the K-Model, and the Sportster was born, though there are a few more differences between the two than that alone.

So, what specific things made the Sportster stand out from any other bike available out there at the time? Well, the body itself was much like those in the K-Line, with the same great big gas tank, fenders, frame, and even the same suspension system. The K-series bikes and Sportsters had their drive trains and shifters on the right, which was contrary to Harley’s larger FLs, which had them on the left. This took some getting use to for those used to the left-side models, but since the British competition featured them on the right, Harley followed suit.

The K-Line models did use a side-valve engine (also referred to as a ‘flathead’), but the Sportsters had overhead valve engines, which were a bit quieter, ran more smoothly, and offered more power than the side-valves. This proved to be more efficient all-around, and the Sportster took off like lightning, even winning the difficult Jack Pine Enduro race before the first year of its release was even over. With good reviews, Harley went ahead into custom-building, and the Sportster became a solid hit thanks to its lightweight body, surprising power level, and efficient motor.

The following is a list of specs that were original to the ’57 Sportster XL Ironhead. Considered a sports bike, it was built to be lighter with more power, and its particulars were the reasons it was a success in those departments. The bike was able to reach a top speed of 95mph (152.9 kmh).

There you have it: the basic features of the original 1957 Sportster XL. You kind find more detailed information, as well as references to compare these specs with those of similar bikes at Bikez.com.

With the birth of the Sportster being prompted by the British invasion, British bike were a huge influence on the original Sportster and its look and feel. There was really no competition for Harley left in the states, as the Indian Motorcycle Company had closed down at the time. HD realized how important it was to be competitive when it came to the overall bike. But would the public really embrace the Sportster, or were the British destined to maintain a stranglehold on the market? Well, history speaks for itself, of course, but let’s take a look at it for ourselves.

In 1957 the company took their Sportster, with iron heads and all, to various regional shows to garner attention to it, since they had no dealer introductions to help them get the job done. They discovered that most men who rode like the more masculine feel of bigger, heavier bikes, and the Sportster, a mid-sized bike, just didn’t cut the mustard in that department. Some even called the bike ‘ugly’ and voiced bits of advice for changing it up. That same summer, during a gathering in Milwaukee to promote the Duo-Glide, the Sportster wound up getting quite a bit of attention and had people talking. Dealers thought they were going to see a more improved bike, and after ribbing Walter Davidson enough he agreed they would make exactly 100 bikes the way the dealers wanted. But if they didn’t sell, they would produce no more.

The result was the release of the XLCH and XLH in ’58. This version had bobbed fenders, no lights, straight pipes, and a few other differences, per the dealers’ requests. As it turned out, sport bike riders loved the changes, and the new versions was a hit, prompting HD to invest a bit more into this infant line.

And the Rest is History

Over the years the Sportster has undergone many minor (and some major) tweaks and changes. Today’s version is much more streamlined, and they are loved by everyone, including the female rider who finds larger bikes difficult to handle. But it’s difficult to forget the humble beginnings of this lightweight dynamo that has withstood the test of time. No matter how technologically advanced, aerodynamic, or loaded the new ones get, it is still the originals that hold fast the hearts of true Sportster lovers all over the world. Easy handling, great power, and the lightweight build make the Sportster one of the most popular bikes among men and women alike.

But, as usual, there is nothing quite like the original…